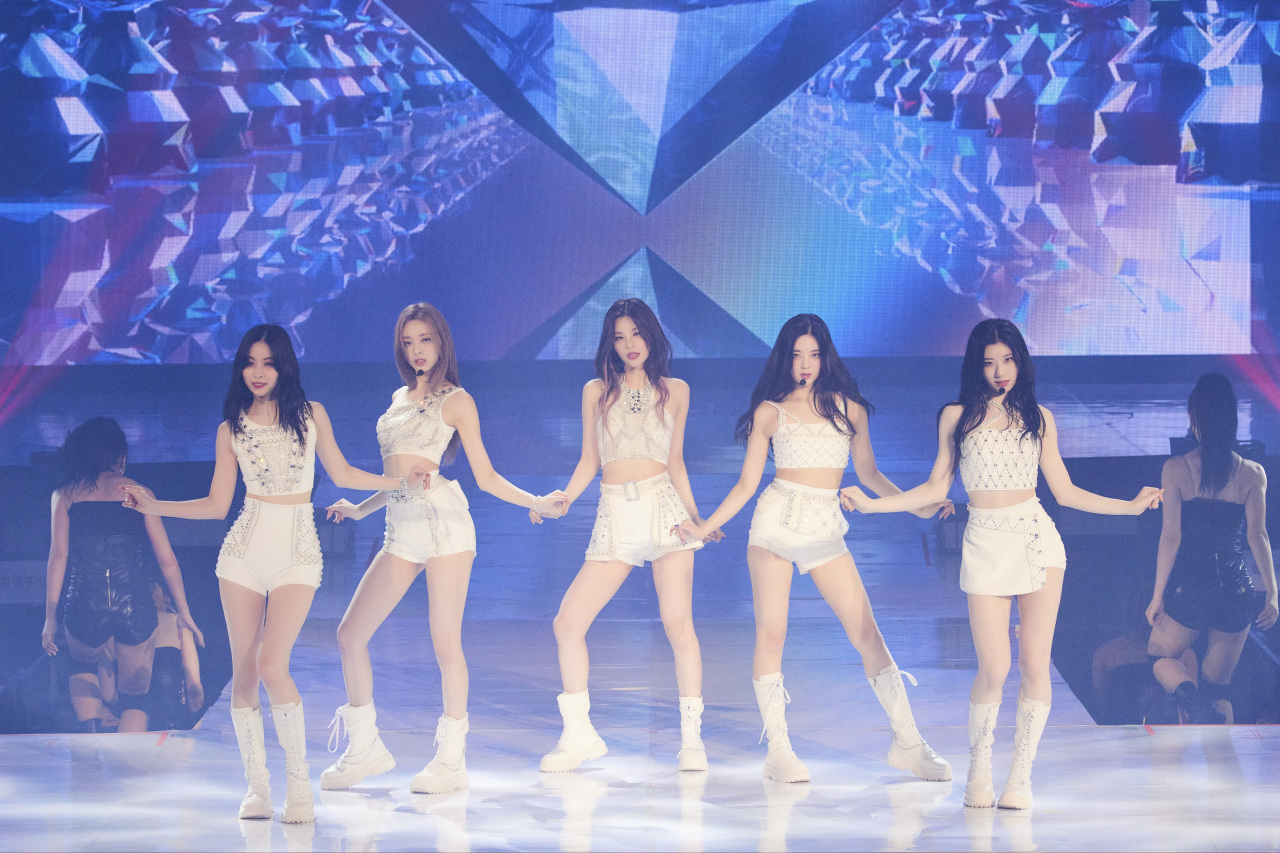 Sunday’s concert was a jam-packed two-hour event. The five members performed 20 songs and prepared five encore performances to bring joy to their fans. The set list was composed of the K-pop act’s biggest hits and solo performances.

Even before the concert started, lines that zig-zag through the venue and fans waiting in single file to queue up for merchandise signaled the long-awaited in-person meeting. Itzy had hosted only one showcase tour in 2019 before the pandemic grounded them.

And as the clock struck 5 p.m., the band’s “Want It?” came out of the speakers for a minute. After a slight pause, the five girls appeared on stage to make the night a nocturnal splendor. Decked out in white and styled in white jewelry as the final touch, Itzy walked down a crown-shaped ladder. 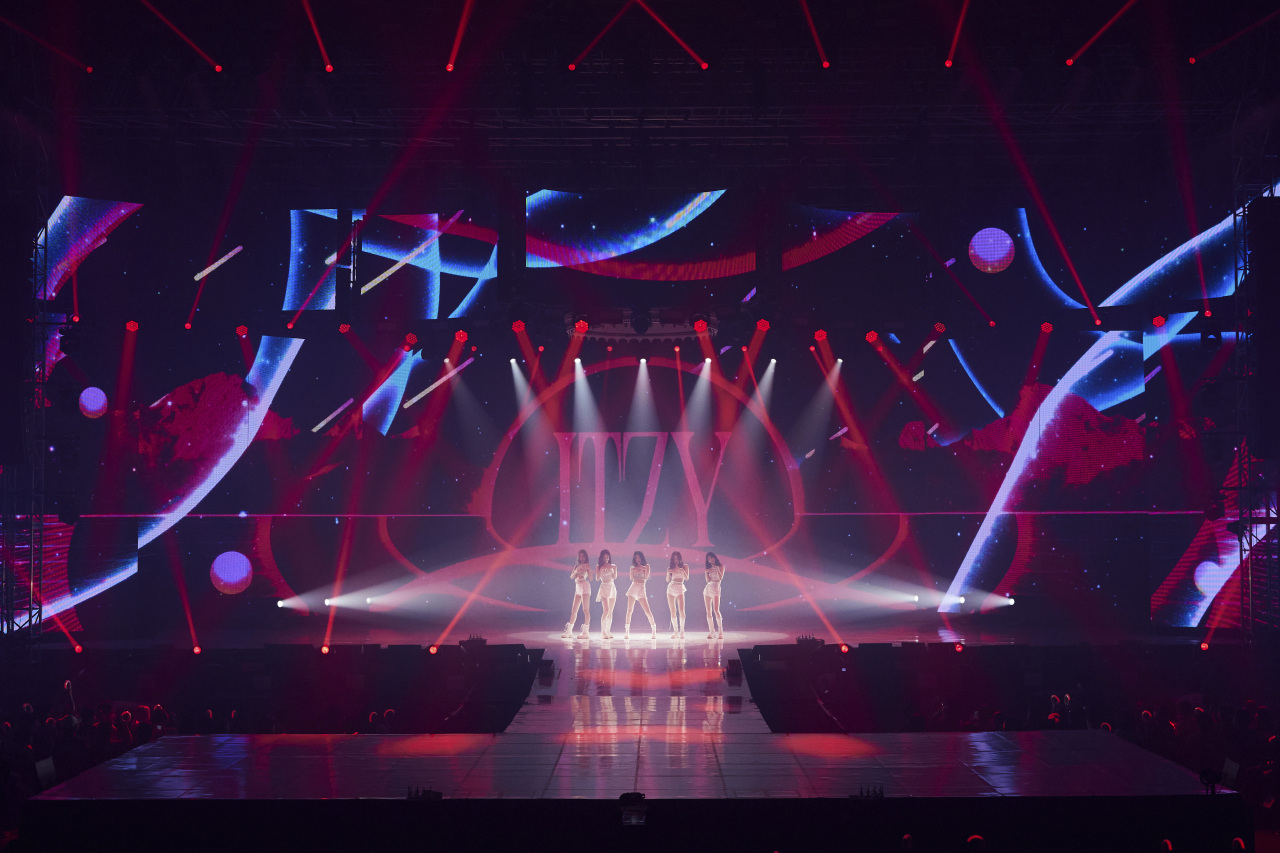 Girl group Itzy performs during its first world tour, “Checkmate,” in Seoul on Sunday. (JYP Entertainment)
“I’m the mafia,” Ryu-jin shouted and opened the last day of the two-day concert with “In the morning.” The venue turned red as the song started, and eagle-eyed fans took out their light sticks, which changed in sync with the stage lights.

Itzy didn’t put a break on its night. The band continued with “Sorry Not Sorry” and sang along to the lyrics, which declared, “Itzy no limit.” As the gig ended, disco lights brightened the venue as the group showcased “Shoot!” adding a cute touch to the concert and marched down to the center stage.

Lia took the microphone to welcome Midzy, the band’s official fandom. “Welcome to Itzy’s first world tour,” she said, calling out fans in person for the first time in two years.

She also greeted fans tuning in virtually via the live concert streaming platform Beyond Live. “We’re going to be all over to meet you guys soon. I’m glad we can enjoy this moment together. I hope you guys have a great time,” Lia said. 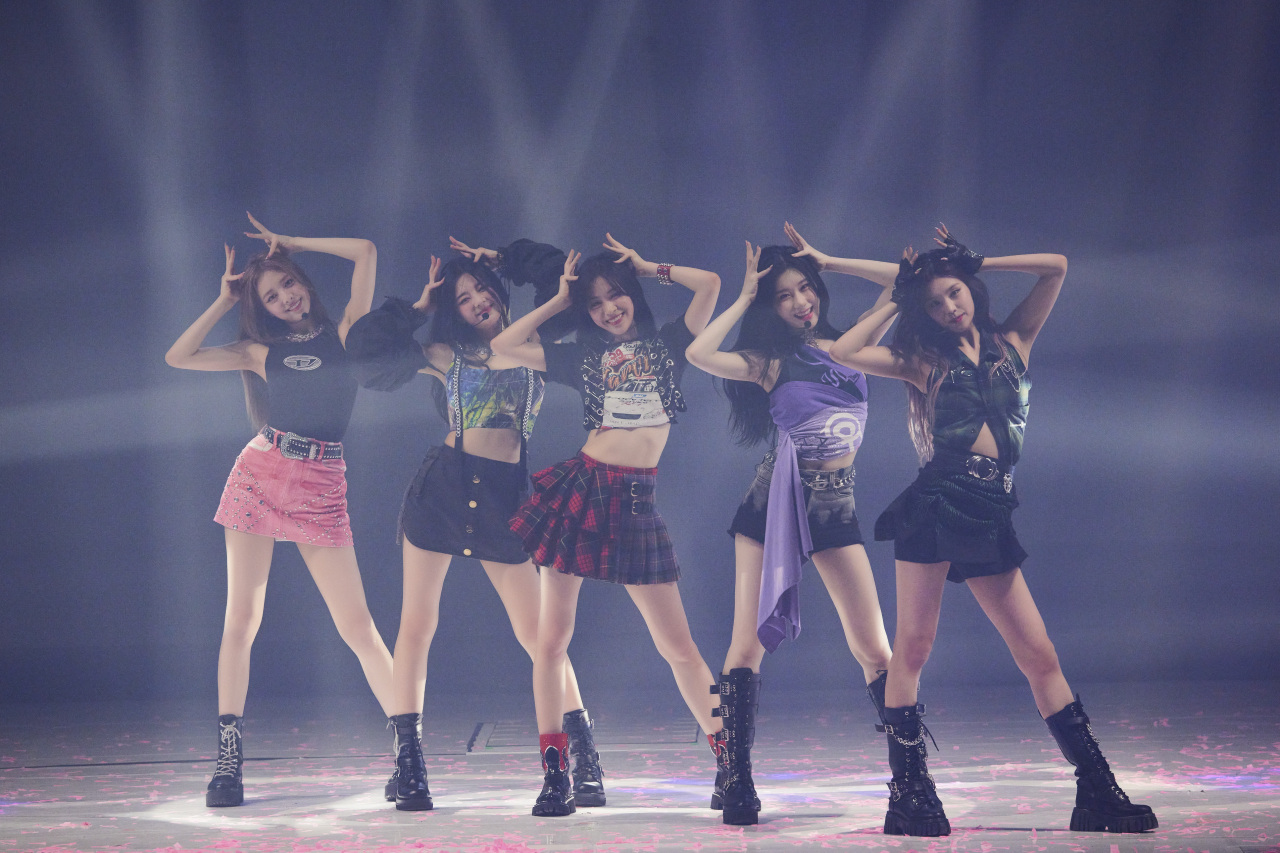 Girl group Itzy performs during its first world tour, “Checkmate,” in Seoul on Sunday. (JYP Entertainment)
“Let’s go,” the band said in unison, and the show took a majestic turn with “What I Want.” “I know what I want,” the lyrics declared, and fans responded with claps and fan chants, which is what they probably wanted to do the most.

Later, Itzy peppered a hip-hop track, “365,” and Ryu-jin took on the baton with her solo performance of Doja Cat’s “Boss B*tch,” spitting hard raps. After her gig ended, the other four bandmates joined the stage for “Cherry.”

The band then brought a song to beat the heat: “Icy.” The sold-out stadium quickly switched into a summer mood. Adding to the sunny season vibes were “Free Fall” and “#Twenty.” Yuna and Lia continued to electrify the night with their solo performances of Conan Gray’s “Maniac” and Taylor Swift’s “Red.”

The third set of the night started with “Wannabe,” as the quintet emerged on stage as the stage fog cleared. Giving Cher and Dionne vibes with checkered pattern outfits, Itzy performed its debut song, “Dalla Dalla,” and “Sneakers,” released in July. 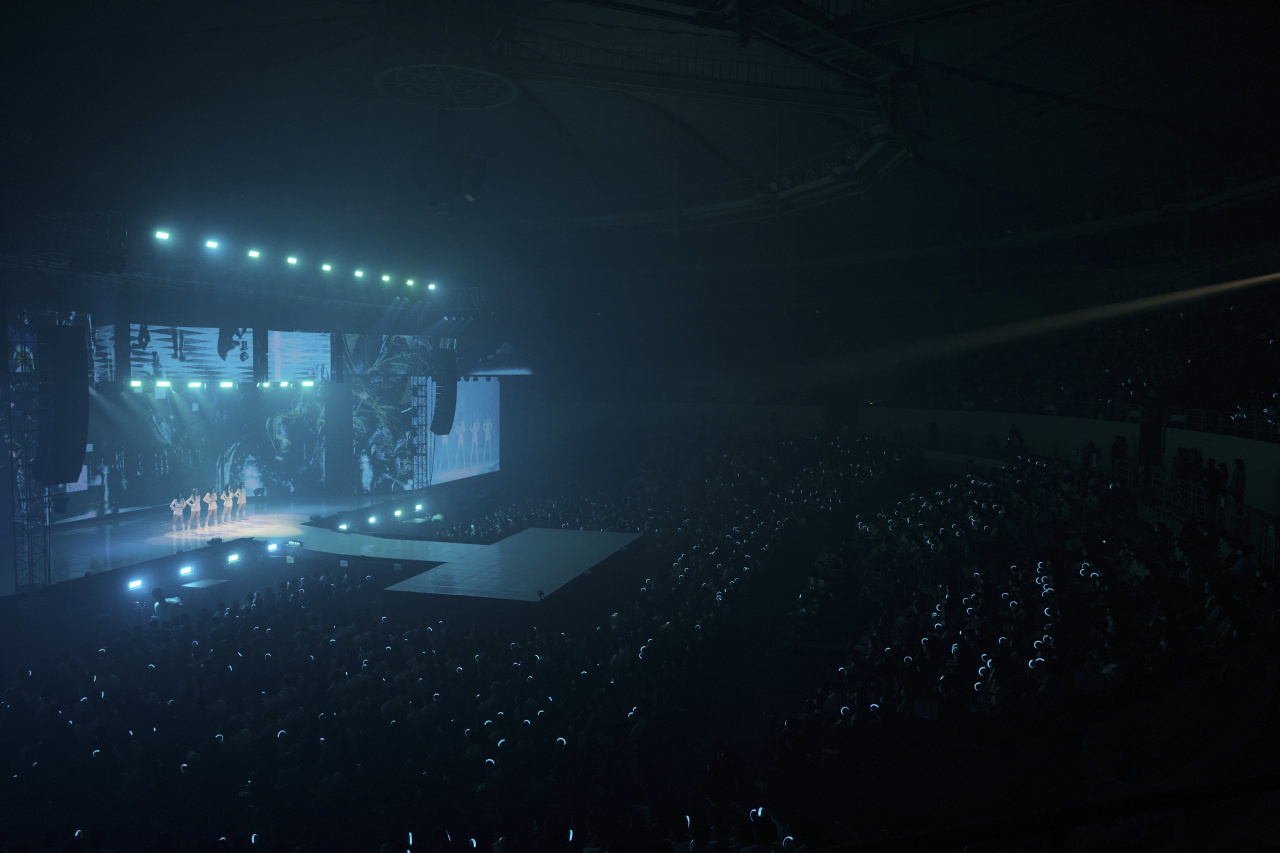 Girl group Itzy performs during its first world tour, “Checkmate,” in Seoul on Sunday. (JYP Entertainment)
“I’m so happy that I can enjoy the night with Midzy’s fan chants,” Yuna said as the band ended its third session.

One of the most electrifying performances of the night was the finale. Itzy upped the ante and brought more joy through two solo gigs. Chae-ryeong gave her take on Ariana Grande’s “bloodline,” and Yeji roamed around the stage to interact with fans through Dua Lipa’s “Hotter Than Hell.”

The group hopped back on stage as a full piece to deliver a thrilling mix of charm and bravado with “Want It?” As the members sang long to “Want to play with us?” fans responded by clapping and shouting “Yes!” letting out their whoops of joy.

Itzy then brought fans in sync through its first fan song, “Nobody Like You,” and took them to the camera zone for fans watching the concert online. 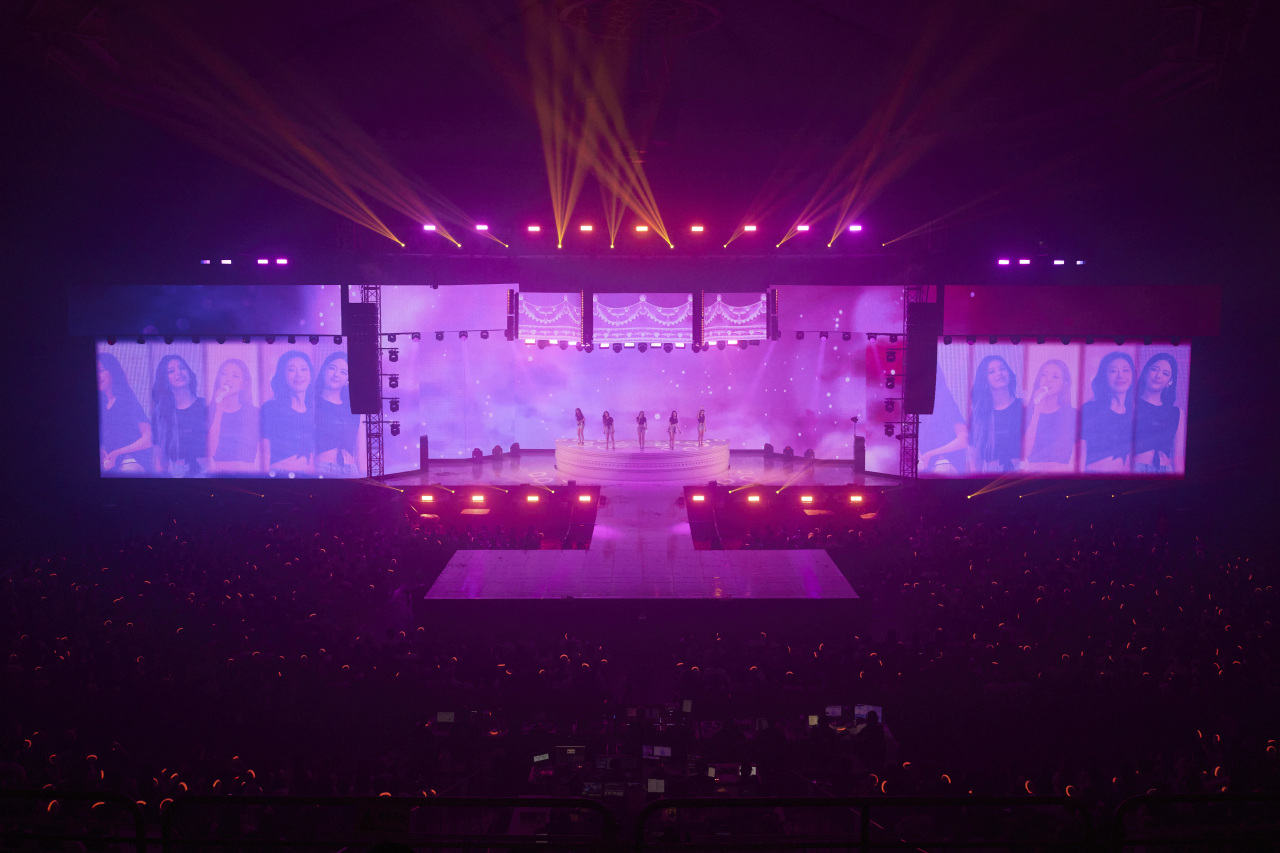 Girl group Itzy performs during its first world tour, “Checkmate,” in Seoul on Sunday. (JYP Entertainment)
After the 20-track set, the quintet thanked fans for being with them on their musical journey.

“Things wouldn’t have been possible without fans. You guys make our challenges more meaningful. The love we’re receiving right now is too big to handle, so we tend to think about how to repay this. But I hope you’ll stay by our side,” the five members said in unison.

The show came to an end with “Not Shy,” Domino,” “Midzy,” “It’z Summer” and “Be In Love” as the group came back for an encore performance.

The “Checkmate” tour marks Itzy’s first international tour since its debut in 2019.

The group kicked off its world tour in Seoul on Saturday. After Seoul, the band will fly out to the US to hold live sessions coast to coast in Los Angeles, Phoenix, Dallas, Houston, Atlanta, Chicago, Boston and New York from Oct. 26 until Nov. 13.