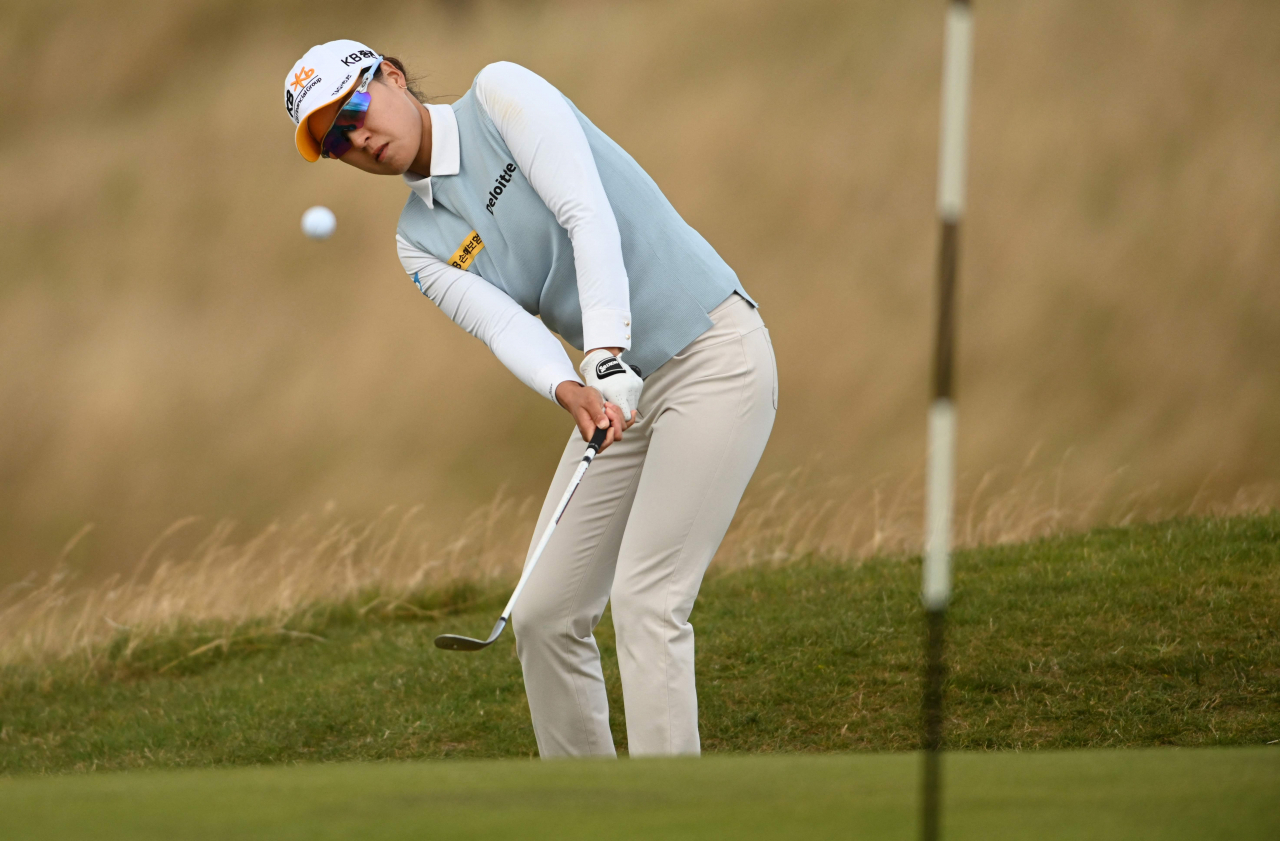 In this AFP photo, Chun In-gee of South Korea plays a chip shot on the seventh hole during the final round of the AIG Women's Open at Muirfield in East Lothian, Scotland, on Sunday. (AFP-Yonhap)

South Korean LPGA star Chun In-gee has finished in second place at the final major of the season in Scotland, losing out on a chance to make history and join an exclusive company.

Chun lost to Ashleigh Buhai of South Africa on the fourth playoff hole at the AIG Women's Open at Muirfield in East Lothian, Scotland, on Sunday (local time).

After finishing regulation knotted at 10-under 274, the two players played the par-four 18th hole four times in the sudden-death playoff. They matched each other with a par, a bogey and then a par on their first three tries, before Chun blinked on the fourth trip.

She pushed her tee shot into a bunker on the right side of the fairway, and could only punch the ball out and advance it a few yards. She reached the green on her third shot.

Buhai found the fairway off the tee but then put her second shot into an island bunker on the right. The South African, though, pulled off a clutch shot out of the sand to leave herself a short par putt to win the tournament.

After Chun had left her own par attempt short, Buhai sank her easy putt for her first career LPGA victory.

"I think I did what I can do. Ashleigh made a great up-and-down on 18 (for the final playoff hole)," Chun said afterward. "I tried to stay in the moment, thinking it's not over until it's over in golf. I came up just short, but I will try to shake off all the disappointment the moment I leave the course."

With a victory at the historic course -- best known for the "Duel in the Sun" between Jack Nicklaus and Tom Watson at the 1977 Open Championship -- Chun would have become the eighth LPGA player to complete a career grand slam, which entails winning four different majors at least once each. The seven who have achieved that feat so far, including South Korean veteran Park In-bee, are all Hall of Famers.

Chun admitted the prospect of completing the grand slam had weighed on her mind and said she will keep chasing that milestone.

"I am sorry to my fans for not delivering them a win from here, but it wouldn't be fun if I'd accomplished the grand slam so easily," Chun said. "I've got next year and the year after. I want to keep pushing myself."

Chun, 27, would also have become the fastest to win four majors in LPGA history. She has four LPGA wins so far and three of them have come at majors, including at the KPMG Women's PGA Championship in June this year.

Chun was also trying to become the first LPGA player since countrywoman Ko Jin-young in 2019 to claim at least two majors in one season.

Chun shot a one-under 70 in the final round to finish regulation at 10-under 274. Buhai, who began the final round leading Chun by five and held a three-stroke advantage with four holes to play, committed a triple bogey at the 15th en route to a 75 that dropped her into the playoff.

On the first playoff hole, Chun found the island bunker with her second shot but made a great escape for a par. On the next trip, Chun pulled her second shot into deep rough and failed to chip the ball onto the green with her third shot. Then her par attempt rolled several feet past the hole, but Chun sank the nervy bogey putt to extend the playoff, moments after Buhai had tapped hers in for her own bogey.

The third time did not prove to be the charm for anyone, as Chun and Buhai traded pars. Then on that fateful fourth trip, Buhai took advantage of the opening provided by Chun's poor tee shot.

All five LPGA majors for this year are in the books, with Chun being the only South Korean champion. The country did not have any major winner in 2021, the first time South Korea was shut out at LPGA majors since 2010. (Yonhap)