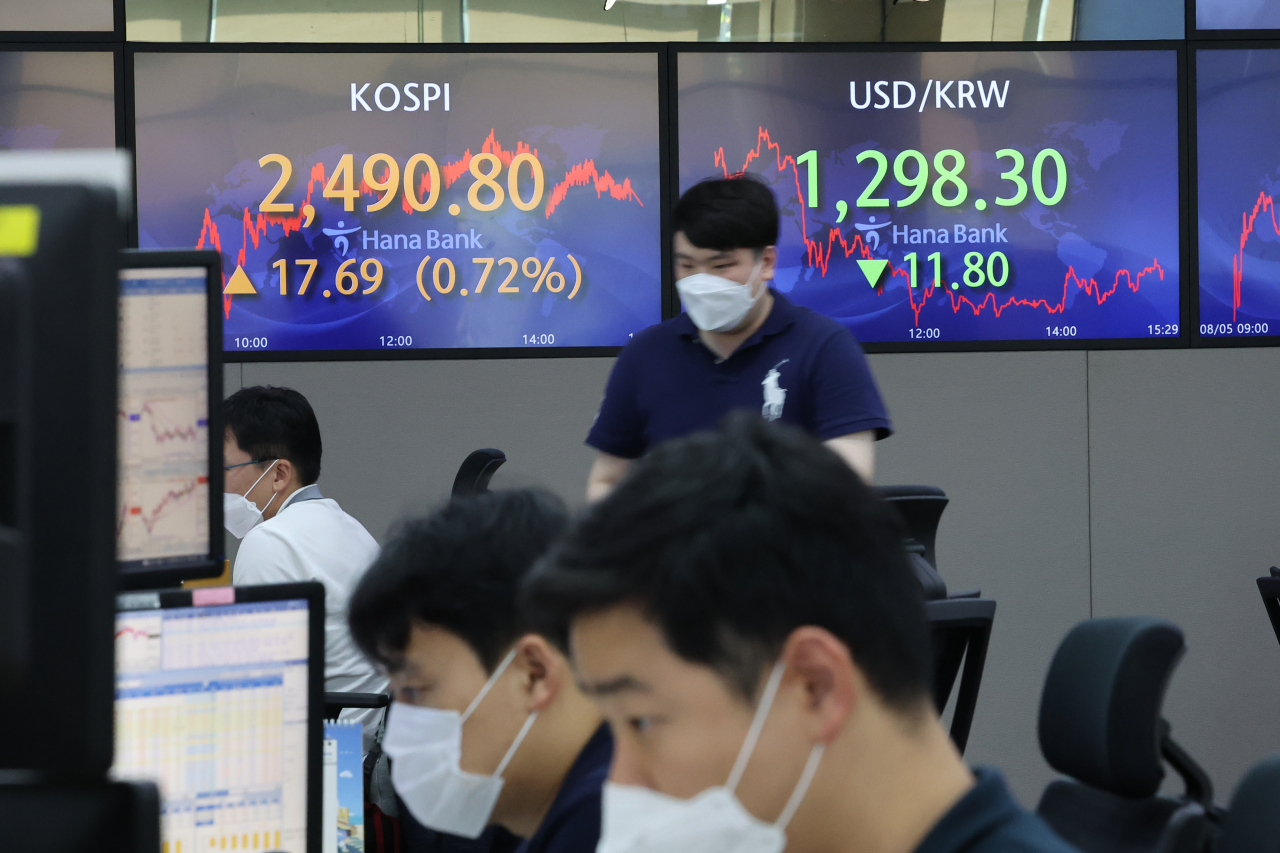 Overseas investors scooped up a net 4 trillion won ($3.08 billion) on the Kospi market from July 14 to Friday, data from the nation’s sole bourse operator Korea Exchange showed, driving the benchmark index’s slight rebound. The Kospi inched up 1.60 percent to 2,490.80 on Friday compared with the closing price of 2,451.50 on July 29.

But analysts called it a “temporary rebound,” citing an inflation respite in the US, which led to heightened anticipations of a possible slowdown in the US Federal Reserve’s rate-hike plans.

“The market may be temporarily alleviated on a short-term inflation respite, but the growing awareness of an inflation slowdown may feed investor caution,” Kiwoom Securities analyst Kim Yoo-mi said.

US inflation jumped 9.1 percent on-year in June, marking the sharpest increase since November 1981 and pushing the Fed to carry out a second consecutive 0.75 percentage point rate hike last month. Gasoline prices -- a major inflation factor -- however, have been declining in recent weeks, lifting the spirit of US consumers for the time-being.

Meanwhile, Korean retail investors have been turning their eyes away from the Kospi market and toward the local bond market.

Retail investors were net buyers of bonds worth a combined 3.51 trillion won from July 4 to Thursday, according to data by the Korea Financial Investment Association.

Financial and corporate bonds accounted for the majority of the purchases, with each coming at a net 1.35 trillion won and 1.34 trillion won of the total, respectively. A net 403.2 billion won worth of government bonds were purchased as well.

In the same period, retail investors offloaded a net 1.21 trillion won worth of Kospi shares.

The Kospi entry into a bear market rally, with the index continuing to be weighed down by risks stemming from the possibility of a recession in the US, pushed retail investors to eye relatively risk-free assets such as bonds, analysts say.

“With the talks surrounding the possibility of a recession in the US, a strong preference for risk-free assets have grown leading to a drop in bond yields,” said Oh Chang-seop, an economist at Hyundai Motor Securities.

The yield on government bonds such as 10-year and three-year Treasury notes have been falling, but corporate bonds have been maintaining solid yields. According to data provided by KOFIA, the yield on nonguaranteed three-year corporate bonds rated AA minus came to an average 4.4 percent as of mid-June, compared with some 2.4 percent as of end of last year.