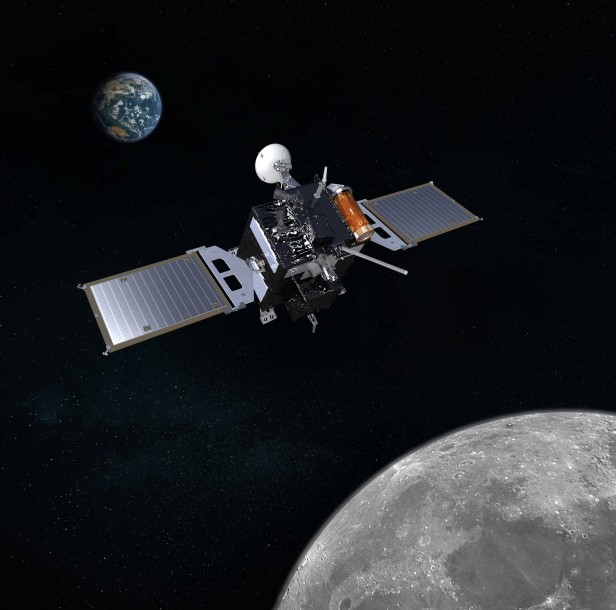 Image of Danuri, Korea Pathfinder Lunar Orbiter, between the earth and the moon (Korea Aerospace Research Institute)
South Korea’s first lunar mission Danuri is all set to be launched into space on a SpaceX Falcon rocket on Friday morning, the Ministry of Science and ICT said Thursday.

According to the ministry, the SpaceX Falcon rocket has been erected at the Cape Canaveral Space Force Station in Florida as of 11:15 a.m., Korea time.

Danuri, formally known as the Korea Pathfinder Lunar Orbiter, will blast off at 8:08 a.m. on Friday, Korea time, or 7:08 p.m. on Thursday, local Eastern Standard time.

The ministry had previously announced that the lunar mission’s launch was delayed for two days due to additional checkups on the US space launch vehicle.

Danuri will detach from the rocket approximately 40 minutes after liftoff, according to the ministry. The lunar probe will make first contact with the ground control station about 20 minutes after the release.

The Korea Aerospace Research Institute will analyze the data and be able to determine whether Danuri has successfully entered its targeted orbit to the moon about five to six hours after takeoff.

If the Korean lunar orbiter gets on track, it will go on a four-month journey to the moon’s orbit, as Danuri will take an energy-efficient trajectory called “Ballistic Lunar Transfer” into deep space.

Korean space authorities said the trajectory utilizes “highways” that exist in various interplanetary gravity pulls to minimize the amount of fuel, which is necessary to change the orbiter’s course. Thus, it allows more payloads on the probe.

Carrying six different payloads, Danuri will enter the moon’s orbit at the end of this year. It will begin its mission around the moon in February after testing its movements and functions in January.

The objectives of Danuri include identifying potential landing sites for Korea’s future lunar missions, testing interplanetary internet communication, conducting scientific investigations of the environment, topography and resources on the moon and probing the dark side of the moon.

All payloads were developed by Korean universities and institutes, except for the shadow camera, which was put together by the National Aeronautics and Space Administration and Arizona State University.

“NASA’s decision to load its shadow camera onto Danuri means that it recognizes (South Korea) as its partner in space exploration. We will expand cooperation with the US in deep space exploration of places like the moon and Mars.” Science Minister Lee Jong-ho told the joint press corps.

Korea’s first lunar mission is expected to last through December 2023. If Danuri’s mission is successful, S. Korea will become the seventh country in the world to have explored the moon behind China, India, Japan, Russia, the UK and the US.

The name Danuri was chosen through a public naming contest in May. It is a combination of the two Korean words “dal” and “nuri,” meaning moon and enjoy, respectively. The name expresses a desire for the country’s first moon mission to be successful and for the probe to enjoy the moon exploration.