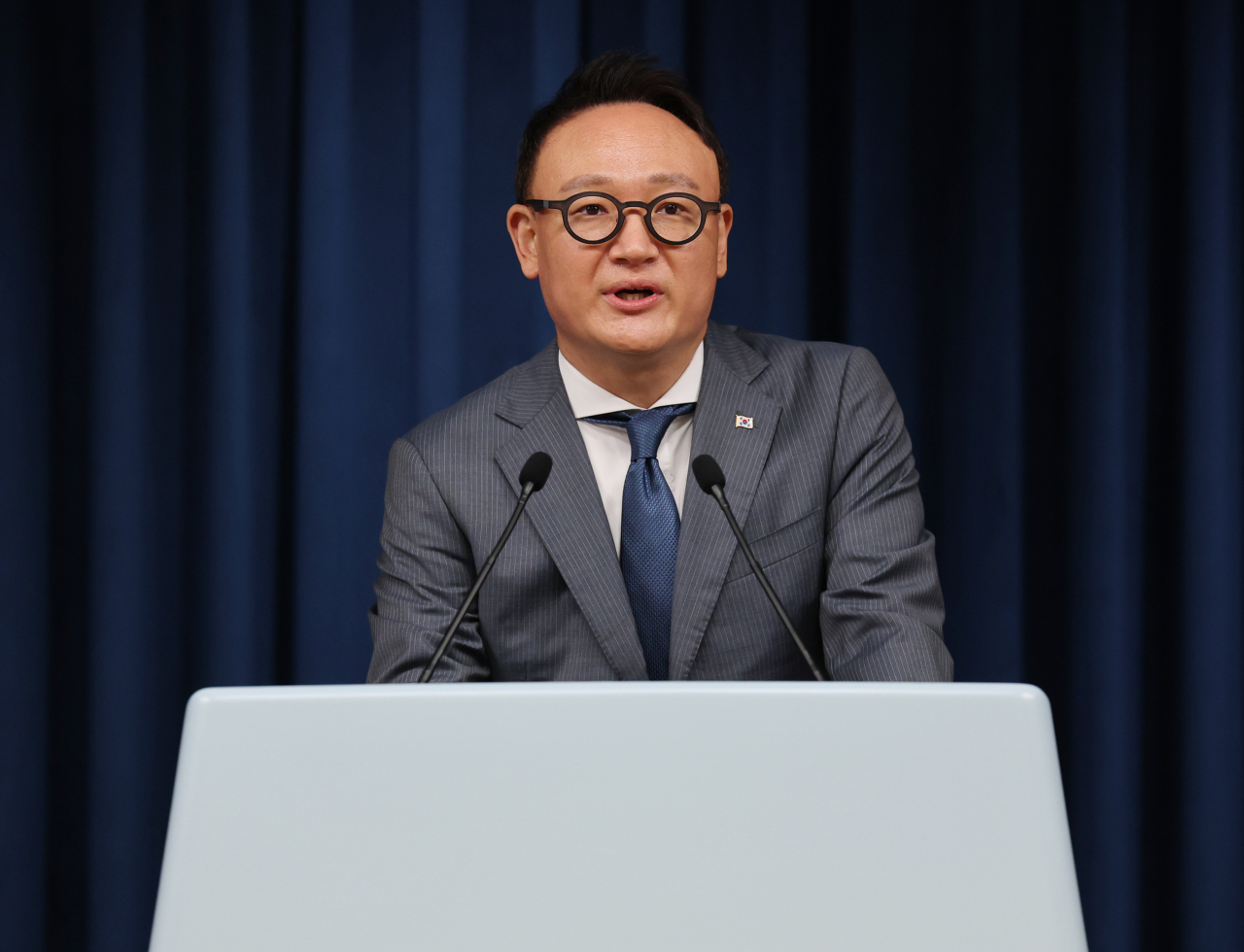 Ahn Sang-hoon, the senior presidential secretary for social affairs, speaks during a press conference at the presidential office in Seoul on Tuesday, about the government's proposal to lower the elementary school starting age to 5. (Yonhap)

President Yoon Suk-yeol has ordered the education ministry to swiftly put to public debate the government's proposal to lower the elementary school starting age by one year to 5, an official said Tuesday.

Yoon also instructed the ministry to play a role in facilitating bipartisan discussions about the plan in the National Assembly because the plan is subject to parliamentary approval, said senior presidential secretary for social affairs Ahn Sang-hoon.

The remarks are seen as a step backward after many teachers and parents have been voicing objections to the plan that they say could further deepen already fierce competition for grades and put the burden of schooling on the intellectually unprepared 5-year-olds.

Teachers and parents also point out the plan could put many students at competitive disadvantages, as the 5- and 6-year-olds who would start school at the same time in the transition period would have to compete more for college admissions and job opportunities.

As of 3 p.m. Tuesday, more than 200,000 people had signed an online petition demanding the government scrap the proposal. Some 150 protesters held a rally opposing the plan, while a nationwide organization of teachers launched one-person relay rallies near the presidential office.

"It is also up to the education ministry to find policy solutions to various concerns," Ahn told reporters.

Through the plan, the government seeks to take on more child care for young children against the backdrop of low birthrates, close education gaps, and eventually help school graduates land jobs and start their careers earlier than now.

In line with the shift in the presidential office's stance, Education Minister Park Soon-ae said the proposal can be withdrawn.

"If the people do not really want it, I believe the policy could be scrapped," Park said during a meeting with representatives of education organizations later Tuesday.

"The proposal was the outcome of brainstorming on how to improve education services for children. The plan can change for the goal," she said. "If the government fails to ease parents' concerns, the government should change the policy. A policy can always be adjusted."

Yoon has called for speedy reform of the pension system amid concerns it could dry up faster than expected due to rapid aging.

Ahn said possible changes to the pension system would encourage workers to invest more into their individual retirement accounts or adjust an income replacement rate for a balanced pension system.

"It's time to rush through structural reform of the pension system," Ahn said.