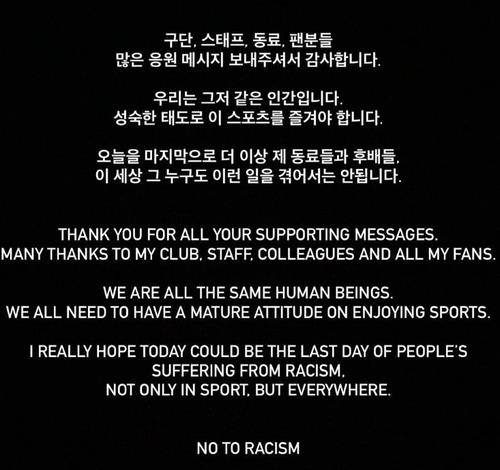 Wolverhamton Wanderers' South Korean forward Hwang Hee-chan spoke up against racism Tuesday, some 24 hours after being subjected to discriminatory abuse during a preseason friendly in Portugal.

"We are all the same human beings. We all need to have a mature attitude on enjoying sports," Hwang wrote on his Instagram page. "I really hope today could be the last day of people's suffering from racism. Not only in sport. But everywhere. No to racism."

Hwang scored a penalty in Wolves' 1-1 draw with the Portuguese side SC Farense at Estadio Algarve in Portugal on Sunday (local time). According to reports from English media, Farense supporters behind the goal flashed a racist gesture at Hwang while he was taking the penalty.

Hwang appeared to inform Wolves captain Conor Coady and the referee of the situation, but no immediate action was taken.

After the match, the Premier League club released a statement to confirm the incident, without specifying Hwang had been targeted.

"We will be reporting the incident to UEFA (the European football governing body) and asking our opponent and relevant authorities to investigate. We are offering our full support to the player involved," the statement read. "Racism in any form is completely unacceptable and should never be left unchallenged."

Hwang is preparing for his second season with Wolves, whom he joined last August on loan from the German side RB Leipzig. Wolves then signed him to a permanent deal that will keep him at Molineux until 2026. Hwang scored five goals in 30 matches last season.

Hwang is one of two South Korean players in the Premier League, along with Son Heung-min of Tottenham Hotspur.