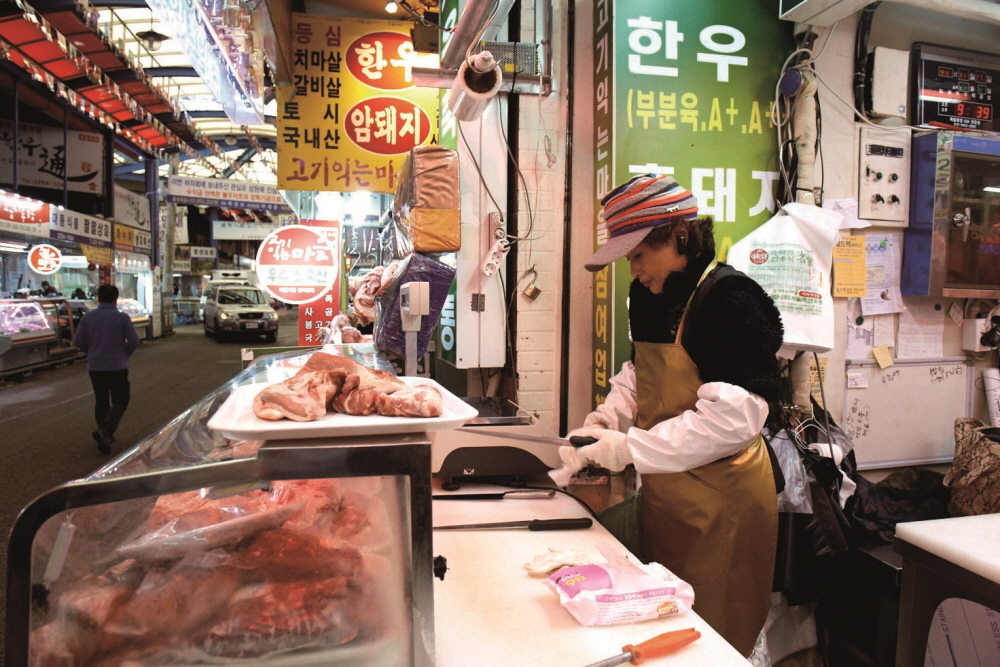 A butcher sharpens a knife at her shop in the Majang Meat Market, Majang-dong, Seongdong-gu, Seoul. (Seongdong-gu Office)

It’s 10 minutes’ walk from the station, but your nose already knows: The air smells like a meat market.

Majang Station on Seoul Subway Line No. 5 is known for its market, where nearly 60 percent of all meat and meat by-products distributed in Seoul are handled. For locals, this is also the place to go to get the best deal possible on high-end hanwoo beef.

Befitting its reputation, the Majang Meat Market had every cut imaginable on display -- from head to feet and intestine to tongue.

When a white truck stopped at the center of the market, a group of men wearing heavy plastic aprons gathered to unload beef carcasses from the vehicle. Livestock are slaughtered elsewhere and meat shops here only handle the post-slaughter process, distribution and sale.

Jeon Young-gil, 62, the owner of a pig by-product processing firm with eight employees, has been in the business since 1983.

His company buys the by-products and provides them to various restaurants after further chopping and cleaning. They include the famous blood sausage restaurants in Sokcho, Gangwon Province, and stir-fried gopchang restaurants near Hongik University in Seoul, Jeon said.

“I feel proud when I see long lines of people waiting to have meals at the restaurants my company supplies to,” he said. 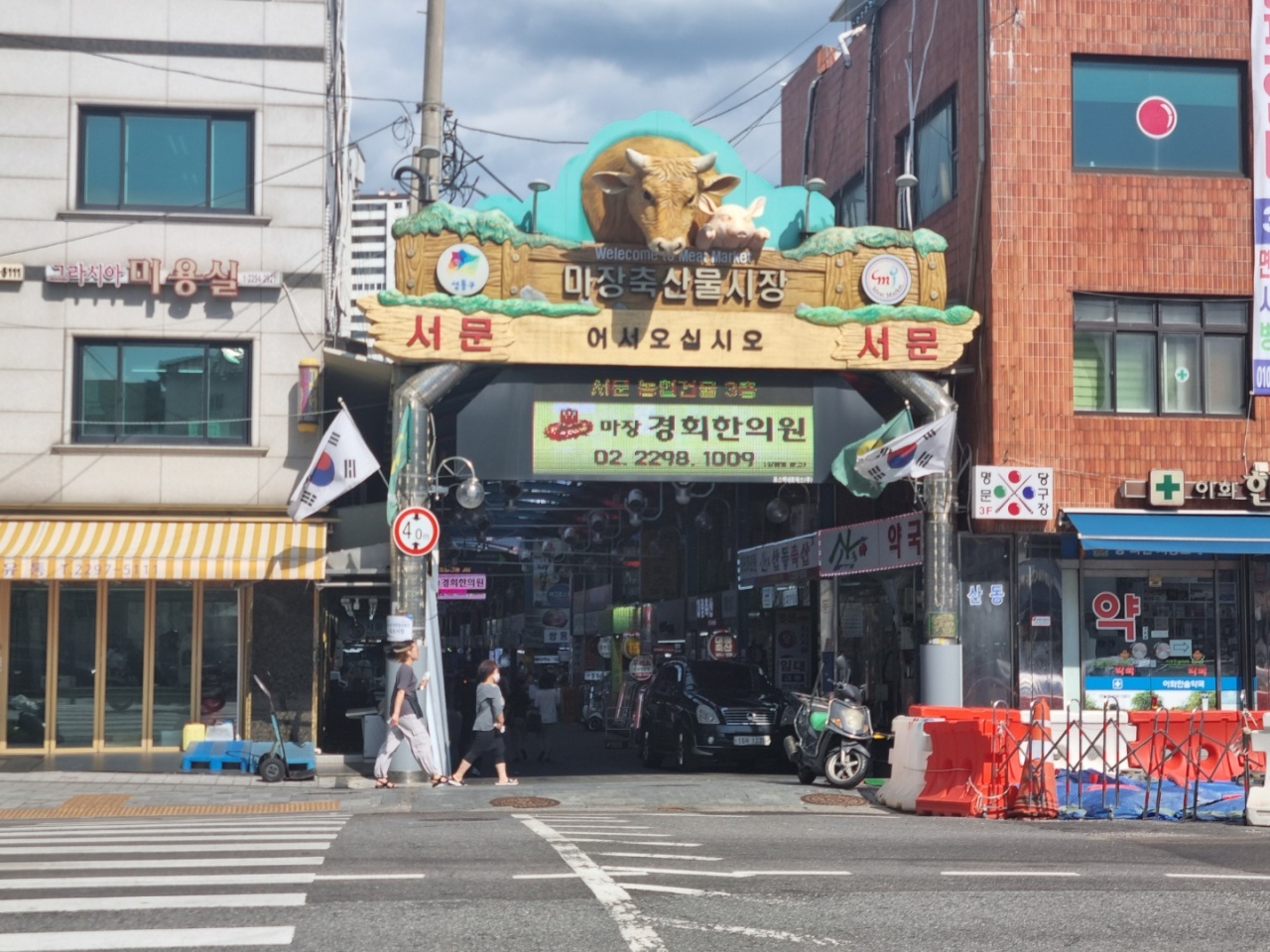 One of the entrances to the Majang Meat Market, Majang-dong, Seongdong-gu, Seoul (The Korea Herald)

The history of Majang Meat Market dates back to 1963, when a major slaughterhouse in Sungin-dong, Jongno-gu moved to the area. The name Majang is associated with horses, and comes from a horse farm that was in the area in the early Joseon Kingdom (1392-1897).

In the ‘70s, when fresh meat was not readily available at department stores or supermarkets as it is now, the meat market drew shoppers from all across the city, who arrived via a now-defunct intercity bus terminal.

At that time, the market offered slaughtering services as well.

“Because of the poor plumbing system, the ground used to be muddy with blood, so we had to wear boots,” Jeon recalled.

Today, the blood-splattered floor is still a regular sight but improved drainage and hygiene means it no longer pools up.

The slaughterhouse in Majang permanently closed in 1998 due to complaints from neighbors over odor and noise.

Many meat shops in the market are run by second- and third-generation butchers. Jeong Ji-yoon, 58, inherited the trade from her in-laws.

“Networking is everything in this market. I was lucky to inherit the business networks my in-laws have built here,” said Jeong who runs a retail and wholesale butcher shop. 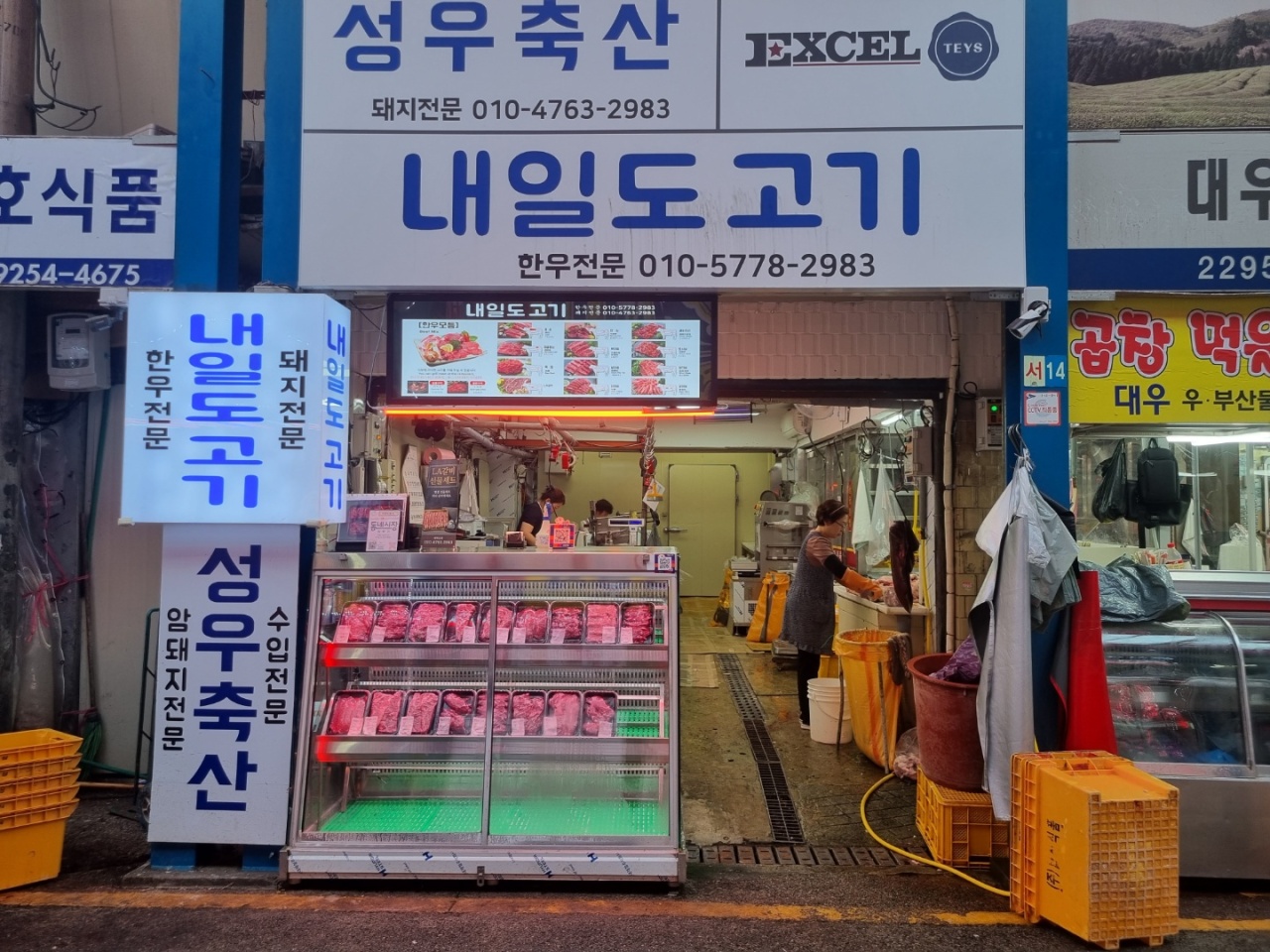 The market is not just for wholesale buyers. It also draws retail shoppers as well as meat lovers who want to enjoy fresh meat at lower prices. Many restaurants here also offer freshly grilled meat.

To some people, however, neighbors in particular, the market is a nuisance.

Although Majang Station is close to the city center, with a view of Cheonggyecheon, an 11-kilometer stream that runs through downtown Seoul, property prices in the area are lower than they are in nearby Wangsimni, Cheongnyangni, and Gwanghwamun.

The meat market -- with its odor and hygiene issues -- is the main reason, according to real estate agents and neighbors.

“The problem is that the market is way too old for some (small-budget) renovation projects to make real changes,” a resident surnamed Park who lives in an apartment in Majang said.

In 2014, Majang was selected for an urban regeneration project, but critics say it did not achieve much except the addition of some murals.

Since 2016, the district office of Seongdong-gu had worked on the market’s sewage treatment systems twice, with an aim of resolving problems involving clogging and odor from the animal oils and other meat by-products that find their way into the drainage systems. 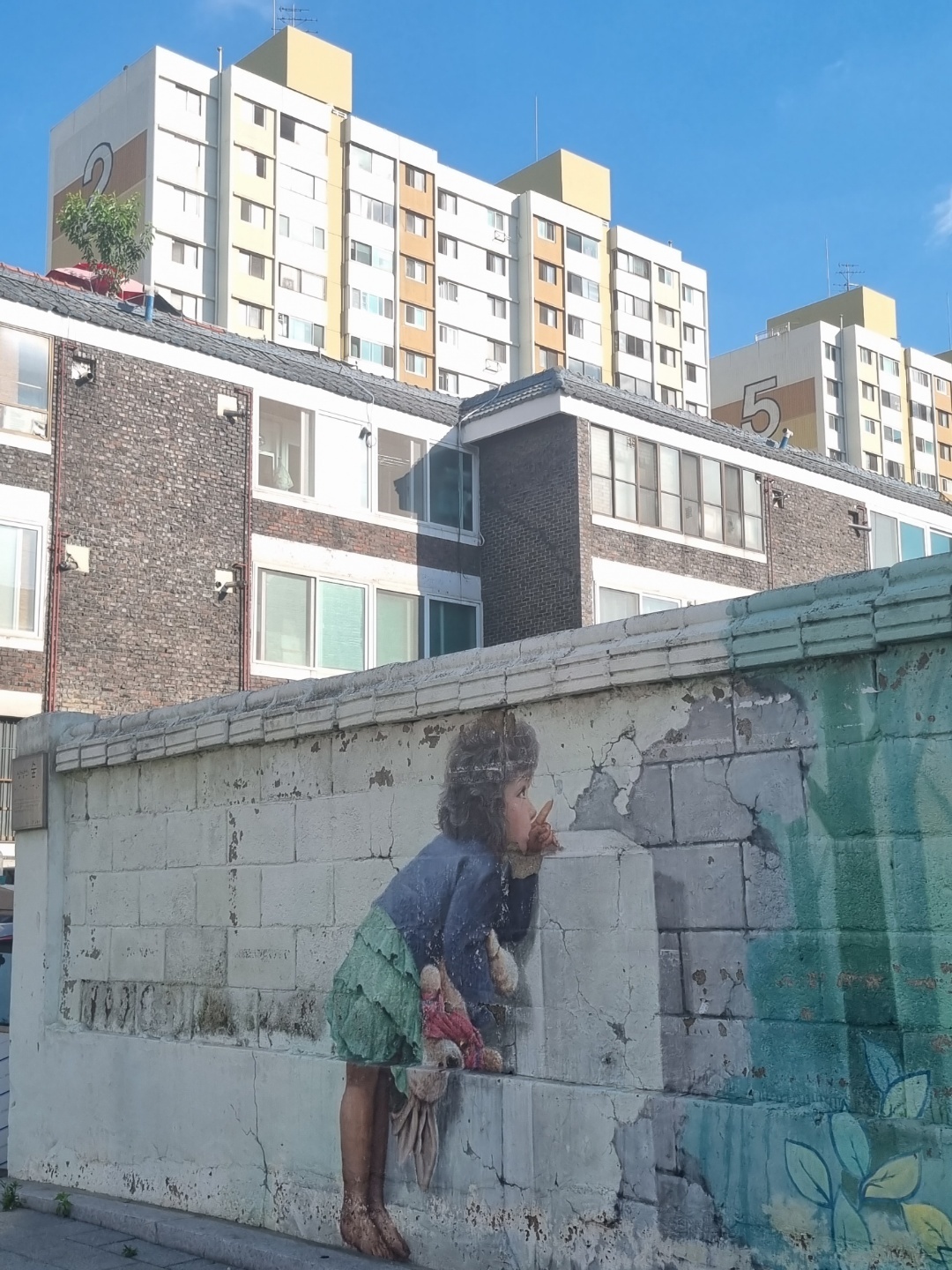 A mural on the wall of an apartment building in Majang-dong, Seongdong-gu, Seoul, on July 25 (The Korea Herald)

Despite the pessimism, projects to redevelop the area surrounding the meat market are set to restart.

In May this year, the Seoul Metropolitan Government designated areas surrounding the market for a development project to upgrade facilities and improve the environment for its neighbors. 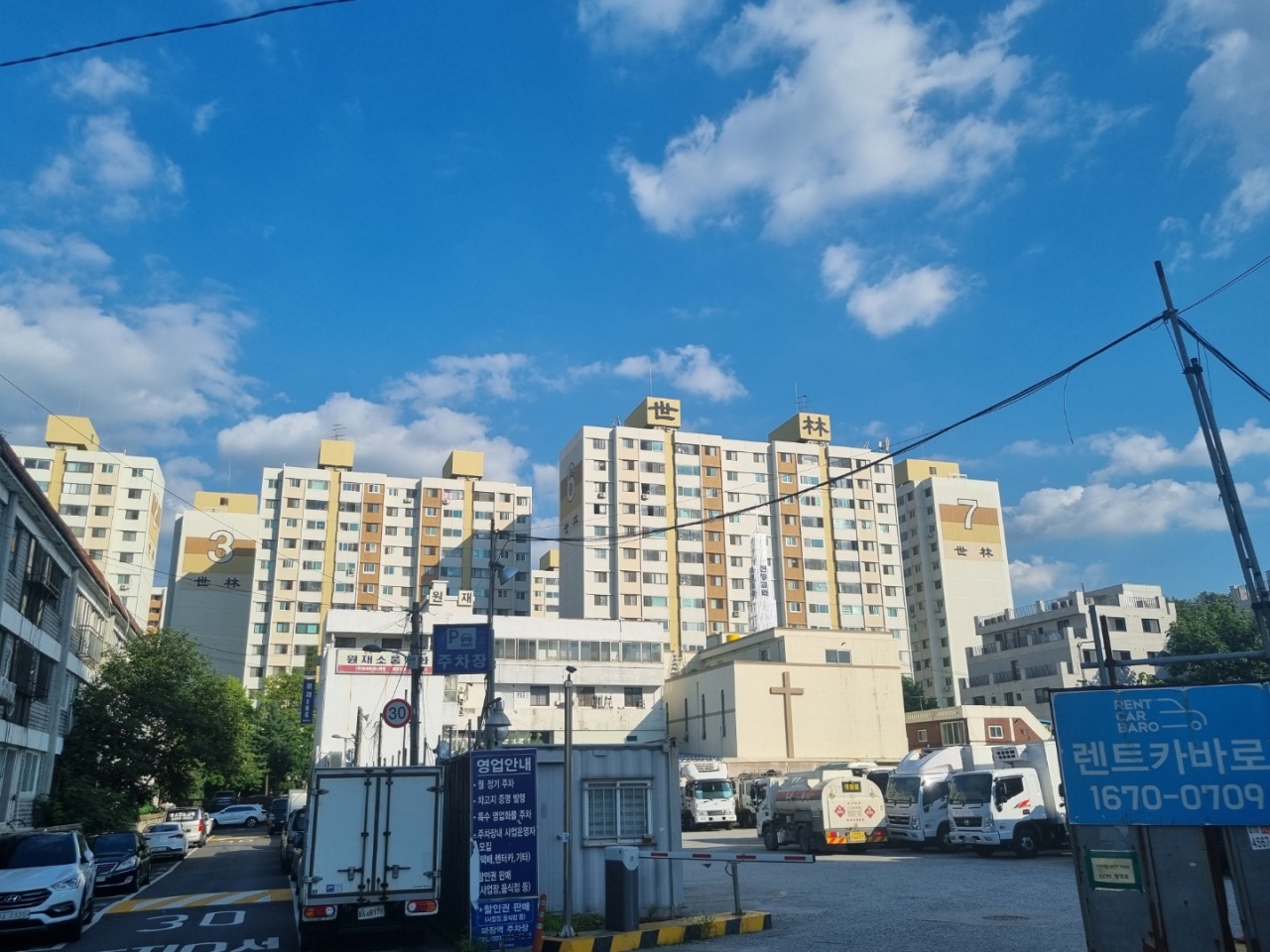 A view of Majang Serim Apartment, which will undergo a redevelopment program in Seongdong-gu, Seoul, on July 25 (The Korea Herald)

The plan includes modernization work, such as providing parking for visitors, and maintenance of signboards and electrical facilities. It also includes measures to strengthen public hygiene and minimize odors.

On top of the city-led projects, old residential complexes are to be redeveloped while a 39,576-square-meter plot, currently used by Korea Electric Power Corp. to store used power transformers, is to be turned into a business and residential complex in the coming years.