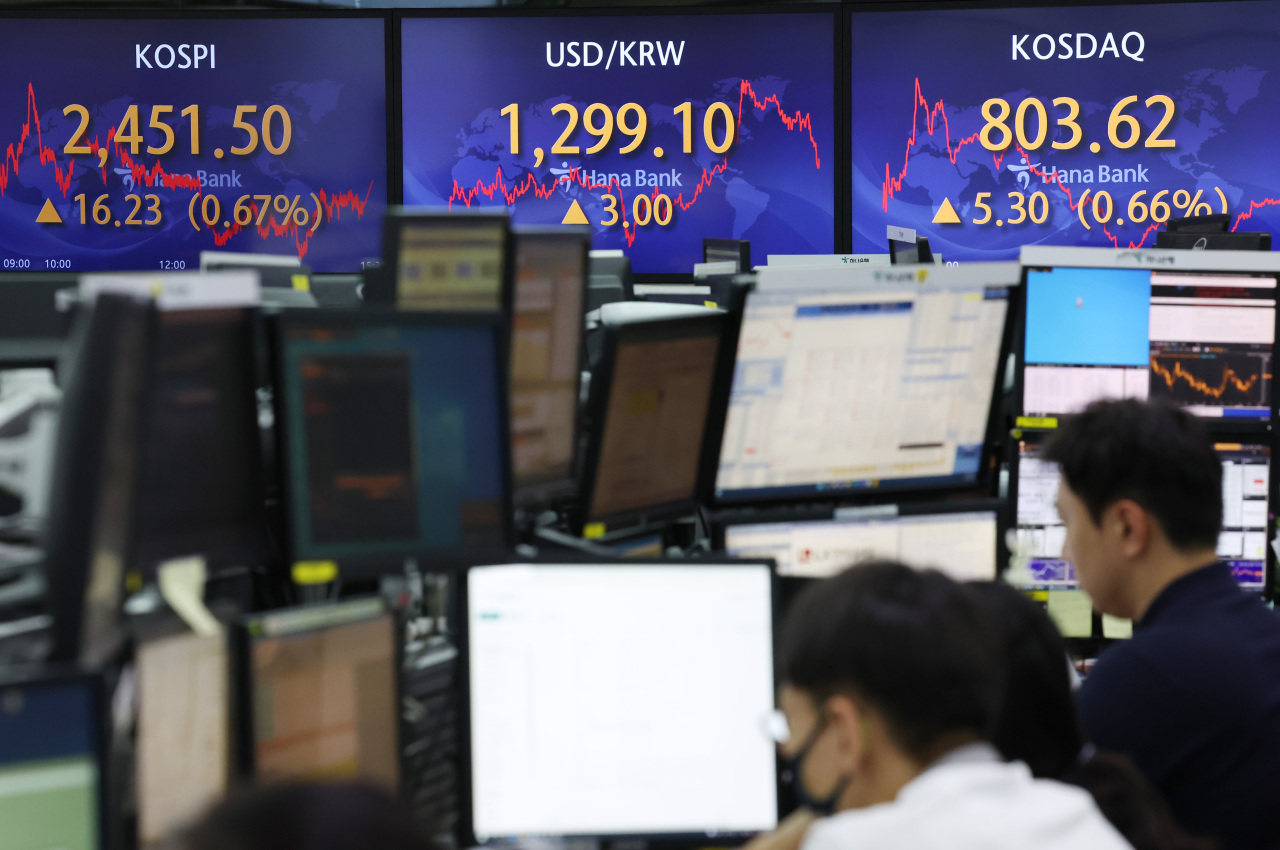 Electronic boards at Hana Bank dealing room in central Seoul show Kospi and Kosdaq prices on Friday. (Yonhap)
South Korea’s Yoon Suk-yeol administration has declared war on the nation’s “deep-rooted” practice of illegal short selling, but retail investors and onlookers are expressing skepticism on whether the practice could really be uprooted.

On Thursday, financial authorities and top prosecutors warned that all profit and hidden money from illegal short selling will be confiscated if the prosecution’s recently revived Financial and Securities Crime Joint Investigation Team catch any signs of such activities.

All investors -- including those based overseas -- will now be required to report to the authorities 90 days after they first borrowed the shares for short selling and the collateral for retail investors to pay back their lender will be reduced to 120 percent of the value of the short sale from the current 140 percent.

The move comes after the news broke earlier this week that local brokerages were recently fined for illegal short selling, angering retail investors struggling in a bear market. This includes the Korea Investment & Securities, which was slapped with a 1 billion won ($766,000) fine in February due to murky short selling of some 150 million shares of 938 companies worth 5.9 trillion won between February 2017 to May 2020, including 26 million Samsung Electronics shares.

With financial authorities failing to detect signs of the Korea Investment & Securities’ illegal short selling activities for more than three years, investors are now skeptical of the government’s oversight. They also believe small measures are not enough and is calling for a systematic overhaul.

“The main reason behind the imbalance between Korean retail investors and institutional, foreign investors is due to a systematic imbalance,” Jung Eui-jung, head of the Korea Stockholders Alliance, which represents some 22,000 stock investors said.

“The imbalance can only be resolved if the same repayment period, margin and collateral that is required of retail investors are adopted for foreign and institutional investors,” he added.

Experts have also hinted that temporary measures on short selling will not have a big impact on the market.

“A temporary ban on short selling won’t have much effect on the market, though it could quell retail investors’ sentiment for some time,” Bin Ki-bum, an economics professor at Myongji University said.

According to data compiled by the sole bourse operator Korea Exchange and the Financial Services Commission, the number illegal short selling cases detected have been increasing in recent years. There were 56 cases in 2021 alone, compared with 5 in 2019 and 12 in 2020. The authorities said they expect to see a total of 80 cases this year.

President Yoon Suk-yeol on Wednesday noted the growing anger of retail investors saying that “market disruptions through illegal short selling and short selling has been fueling the concerns of investors.” He pointed out that “the current market (disrupted with short selling) is unable to earn the trust of the investors.”

Short selling is a trading technique in which investors sell stocks they borrowed in expectations that share prices will fall. When the prices fall, they can make profits by buying back the stocks at lower prices.