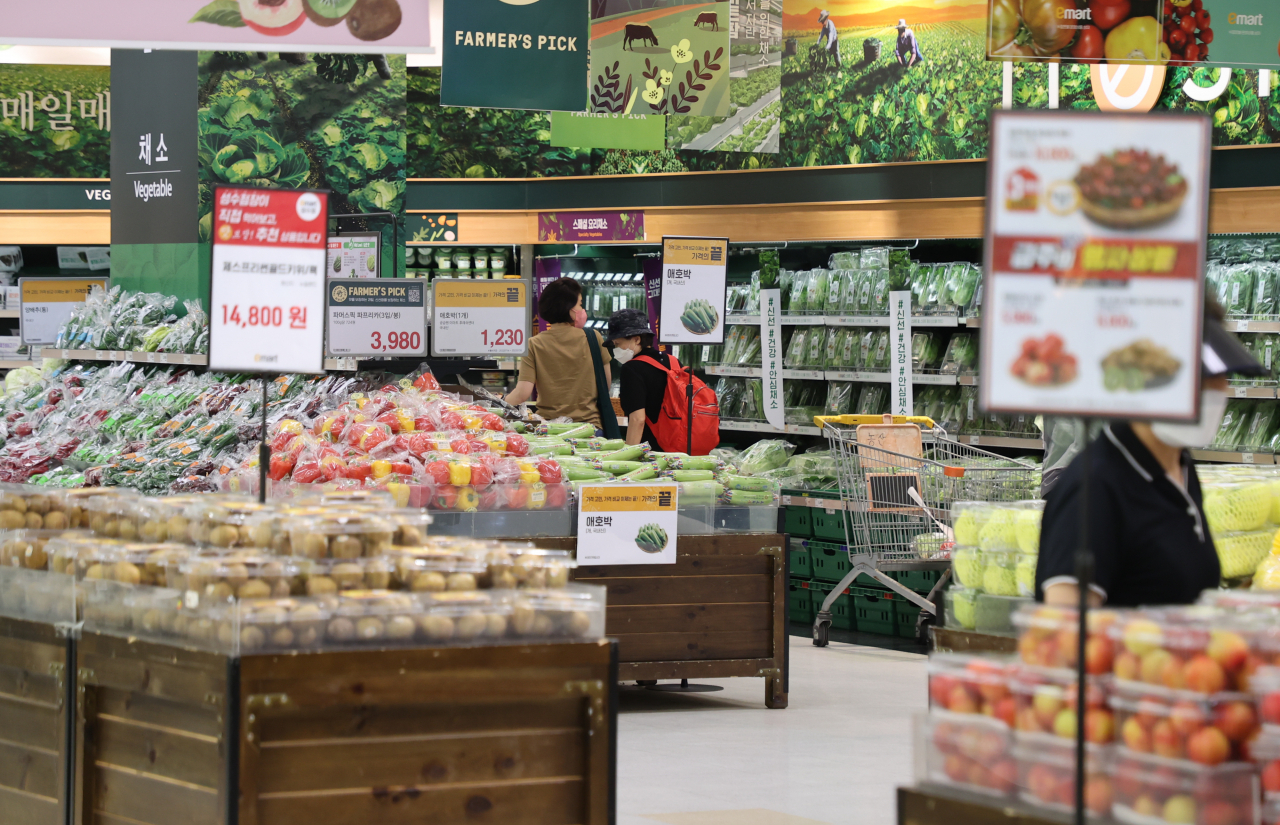 This file photo, taken on Wednesday, shows citizens shopping for vegetables at a discount store chain in Seoul. (Yonhap)

Industrial output grew for the second straight month in June as it rose 0.6 percent on-month, following a 0.8 percent increase in May, according to the data from Statistics Korea.

The June increase was led by robust production in the manufacturing sector, the backbone of the economy. Manufacturing output rose 1.8 percent, the fastest growth in six months, helped by brisk chip and auto production.

But retail sales, a gauge of private spending, fell for the fourth consecutive month in June. It marked the first time in more than 24 years that consumption slid for four months in a row.

Retail sales declined 0.9 percent last month, after a 0.2 percent on-month fall in May.

Still, overall consumption increased in the second quarter as demand for in-person services, such as accommodations and restaurants, remained robust amid the lifting of virus curbs, he noted.

Asia's fourth-largest economy faces the risk of stagflation, a mix of slowing growth and high inflation, due to heightened external economic uncertainty, caused by the ongoing war between Russia and Ukraine and the Federal Reserve's aggressive monetary tightening.

The finance ministry said downside risks to economic growth have increased as exports growth and facility investment could be dented by the global economic slowdown.

Concerns are growing that the Fed's aggressive rate hikes could cause the U.S. economy to slip into a recession.

Inflationary pressure has rapidly built up due mainly to soaring oil and commodity prices. High inflation erodes people's purchasing power and could weigh on consumption.

The inflation rate is expected to stay in the 6 percent range for the second straight month in July as prices of farm products jumped due to heavy rains and heat waves, according to First Vice Finance Minister Bang Ki-sun.

In July, the Bank of Korea (BOK) delivered an unprecedented 0.5 percentage-point rate hike in a bid to tame inflation. It marked the sixth rate increase since August last year.

A rate hike is meant to curb inflation but could increase debt-servicing burdens and slow down economic growth as it weighs on private consumption.

South Korea's consumer sentiment fell to the lowest in 22 months in July, while inflation expectations hit a record high amid rising energy costs.

Consumers forecast consumer prices to jump 4.7 percent over the next 12 months, up from the previous month's 3.9 percent.

Earlier this week, the International Monetary Fund lowered its 2022 economic growth outlook for South Korea to 2.3 percent from 2.5 percent.

The South Korean government cut its 2022 economic growth outlook to 2.6 percent, while sharply raising its inflation forecast to a 14-year high of 4.7 percent. The BOK forecast the economy to grow 2.7 percent and inflation to rise 4.5 percent this year. (Yonhap)