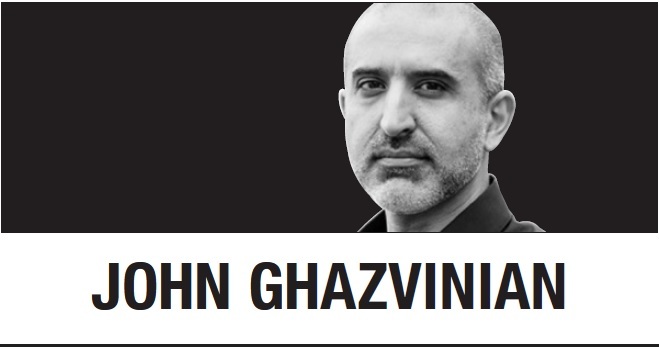 It is now clear that the talks aimed at reviving the 2015 Joint Comprehensive Plan of Action -- commonly known as the Iran nuclear deal -- are going nowhere. After eight rounds of indirect talks, the Biden administration and the government of Iran’s hard-line president, Ebrahim Raisi, have failed to reinstate the deal that the Trump administration renounced in 2018.

Iran refuses to return to the Iran nuclear deal unless it receives an ironclad guarantee that it won’t be repealed again if a Republican president comes to power in 2024. Iran also wants the foreign terrorist organization designation the Trump administration slapped on its Revolutionary Guard Corps removed before a new deal, and any accompanying sanctions relief, can be put into place. Both these demands, for different political reasons, are impossible for the US to agree to.

The Iran nuclear negotiation, when it began in 2009, was never meant to take on a life of its own or become the alpha and omega of US-Iran policy. Rather, President Barack Obama envisaged it as an opening to Iran -- just one way to begin a larger conversation about rapprochement and reengagement with the Islamic Republic.

But somewhere along the way the nuclear deal itself became an obstacle, one more disagreement in the pantheon of disagreements between the two countries. Far from “preventing a nuclear Iran,” it has become a roadblock that every conversation about Iran must maneuver around -- or through.

If the Biden administration wants to make any serious progress in containing the challenge posed by Iran and furthering US interests in the region, it needs to begin by acknowledging two uncomfortable realities.

The first is that when it comes to US policy on Iran, the Trump administration won. It was devastatingly effective at getting what it wanted -- which was to make it almost impossible for the US to return to the nuclear deal if Trump lost the 2020 election. Thanks to the 2018 withdrawal, and the torrent of sanctions that followed while Trump was in office, Iran no longer believes Washington is capable of keeping its word. In Iran, there appears to be widespread conviction that a future Republican president will do everything in his power to rip up any agreement that Biden might negotiate.

The second -- and perhaps more uncomfortable -- reality is that Iran also won. Though US officials do not like to admit this out loud, at some point in the last four years Iran finally became a nuclear-capable state. This is not to say that Iran now has an actual bomb, or even wants one. Rather, Iran is now “one screwdriver’s turn away” from a bomb -- with all the enriched uranium and capability that allows it to rush to make a bomb if it ever felt it needed to, within a matter of weeks. This is precisely the outcome that multiple US administrations swore they would never allow.

Remember that the conflict between the United States and Iran was never about nuclear centrifuges and uranium enrichment. It has always been fundamentally political in nature, dating to Iran’s 1979 revolution, the fall of the pro-American shah, Mohammad Reza Pahlavi, and the taking of hostages at the US Embassy in Tehran. In the decades since, the grievances between the two countries have only grown. To move forward, the US should return to dealing with Iran the way it did before the nuclear negotiations began in 2009 -- on political issues, with (one hopes) political solutions.

The obvious benefit of a political approach for the Biden administration is that it will free up the United States to pursue broader, deeper and more comprehensive negotiations with Iran, on such issues as ballistic missiles, human rights and Iran’s support for proxy militias in the region. Rather than trying to renegotiate the complex nuclear deal, the White House can focus on the core range of disagreements that separate the two countries.

Yes, this might mean the US would need to make some concessions, such as loosening secondary sanctions and making it easier for Iran to sell its oil internationally. But Iran would also have to recognize that recent changes in the region -- including the Abraham Accords (normalization agreements with countries including the United Arab Emirates that integrate Israel into the region) and the weakening of Russia -- have left it more isolated than ever. Therefore, it has more to gain from cooperation than confrontation with the US.

An approach like this might even be easier to sell domestically than the idea that a revived nuclear agreement is still possible. In 2015, Obama faced a bruising battle to overcome congressional opposition to the Iran nuclear deal. Today that achievement would be even harder. By declaring the death of the deal, Biden would circumvent all that. He would give Iran hawks in Washington the satisfying feeling of political victory -- and the logical conclusion of their long-standing opposition to the nuclear deal. He can then get on with the business of pursuing his own, more realistic policy on Iran.

The world has changed since 2009. Iran has become a nuclear-capable state. Whether it goes any further down the nuclear road is a political decision Tehran will make, not a technical one to be determined by more negotiations. The Biden administration and its European allies should acknowledge this fundamental shift. The Iran nuclear deal is dead. Let’s bury it for good.


John Ghazvinian
John Ghazvinian is an author, historian and executive director of the Middle East Center at the University of Pennsylvania. He wrote this for the Los Angeles Times. -- Ed.