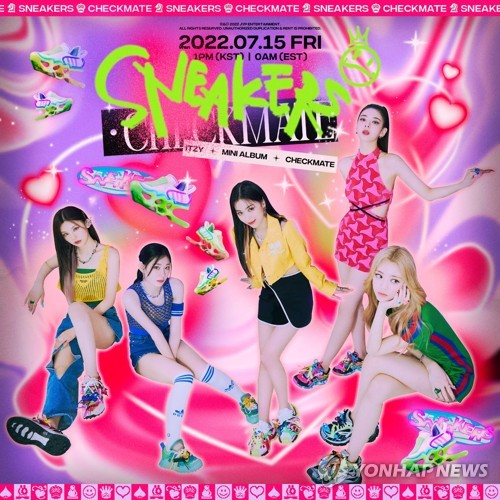 "ITZY's Checkmate debuts at No. 8 on the Billboard 200, giving the South Korean quintet its first top 10 effort," Billboard said Sunday (US time) in a preview of the upcoming chart.

The Billboard 200 ranks the most popular albums of the week in the United States, measured by equivalent album units, comprising physical album sales and other digital sales records.

Billboard said 98 percent of the album's first-week sales were CDs, with the other 2 percent digital album sales.

ITZY's previously highest-charted album was its first studio album, "Crazy in Love," which reached 11th upon its release in September last year.

"Checkmate" has seven tracks, including the main single, "Sneakers," with lyrics encouraging listeners to run as far as they can without hesitation in sneakers.

Starting next month, the K-pop quintet will hold its first-ever tour of American cities.

After kicking off the tour in Seoul on Aug. 6-7, the band will fly to the US for concerts in Los Angeles, Phoenix, Dallas, Houston, Atlanta, Chicago, Boston and New York until Nov. 13. All tickets for the US concerts were sold out as soon as they were made available, according to the agency.

Debuting in 2019, the girl group has worked actively traveling between South Korea and Japan. It is known for "Dalla Dalla," "ICY," "Wannabe," "Not Shy," "In the Morning" and other hit songs.

It has also enjoyed popularity in the US, with "Crazy in Love" led by "Loco" reaching No. 11 on the Billboard 200 after its fourth EP, "Guess Who," debuted at No. 148 in April last year. (Yonhap)