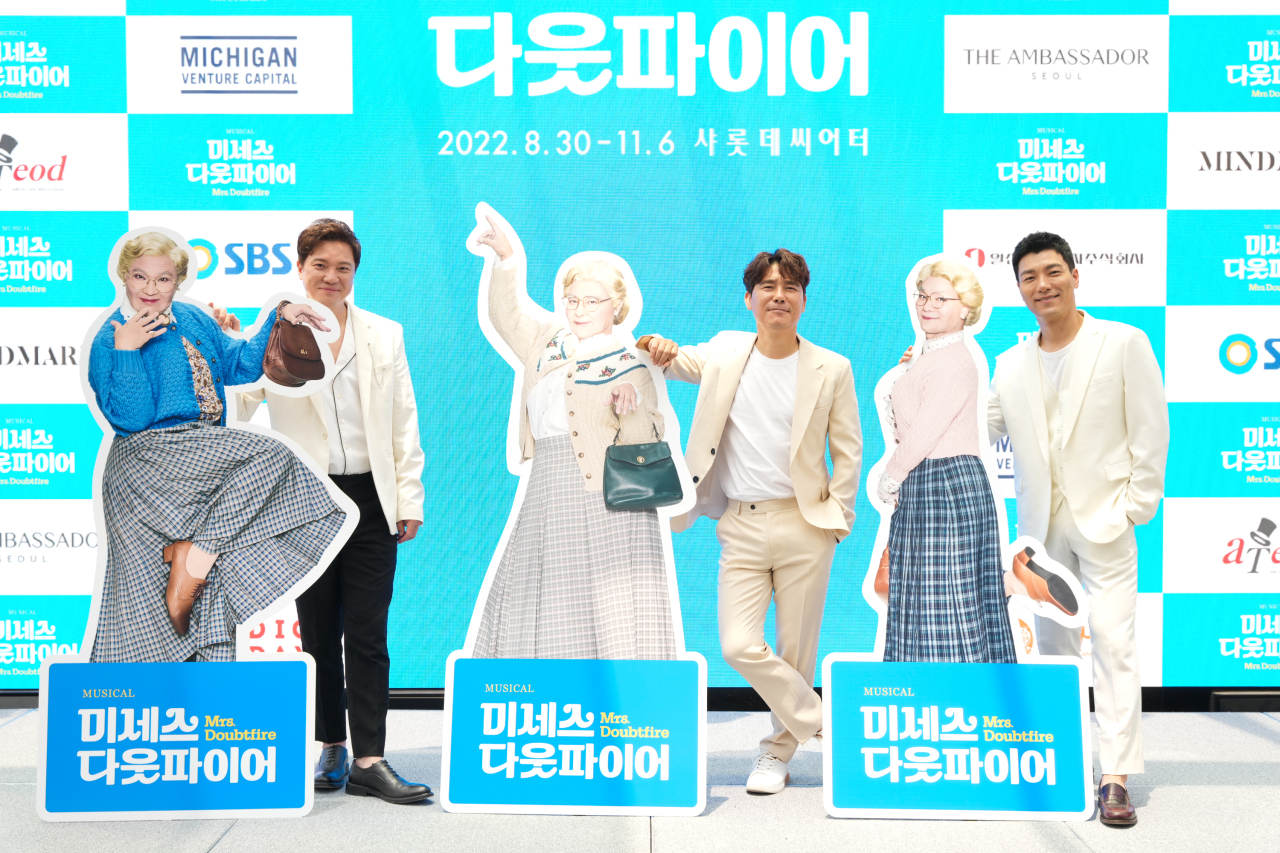 (From left) Jung Sung-hwa, Im Chang-jung, and Yang Joon-mo pose for photos during a press conference on Wednesday. Three actors will take the role of Daniel Hillard, the main character of musical "Mr. Doubtfire," which will run from Aug. 30 to Nov. 6 at Chalotte Theater in Seoul. (Sem Company)

Musical “Mrs. Doubtfire,” based on the 1993 hit movie with the same title, will hit local theaters as the first licensed production of the Broadway show, according to its production companies, Sem Company and Studio Sunday.

The Korea production will feature three actors for Daniel Hillard - versatile singer Im Chang-jung, comedian-turned actor Jung Sung-hwa and musical actor Yang Joon-mo. The plot unfolds around Daniel Hillard, a struggling, out-of-work voice actor, who is also a devoted father. After losing custody in a messy divorce, he creates the kindly alter ego of Scottish nanny Euphegenia Doubtfire in a desperate attempt to stay in their lives.

The show shows quick transformations between Daniel as himself and as Mrs. Doubtfire.

The Korean production is a non-replica, meaning that the local production company has a leeway to alter some part of the production.

“Because it is a comedy, it’s important to consider the local audience,” Studio Sunday CEO Park Min-sun told The Korea Herald on Tuesday.

On Broadway, the preview of Mrs. Doubtfire, produced by Kevin McCollum, began in March 2020 before it was forced to shut down amid the COVID-19 pandemic. The preview performances returned in October 2021 and opened on Dec. 5 and closed again in January. The show was closed in May this year, just one month after the reopening, due to the spread of the omicron vibrant.

“It was a difficult decision on the part of the producer, but he acknowledged that South Korea’s musical industry is quite strong,” Park said.