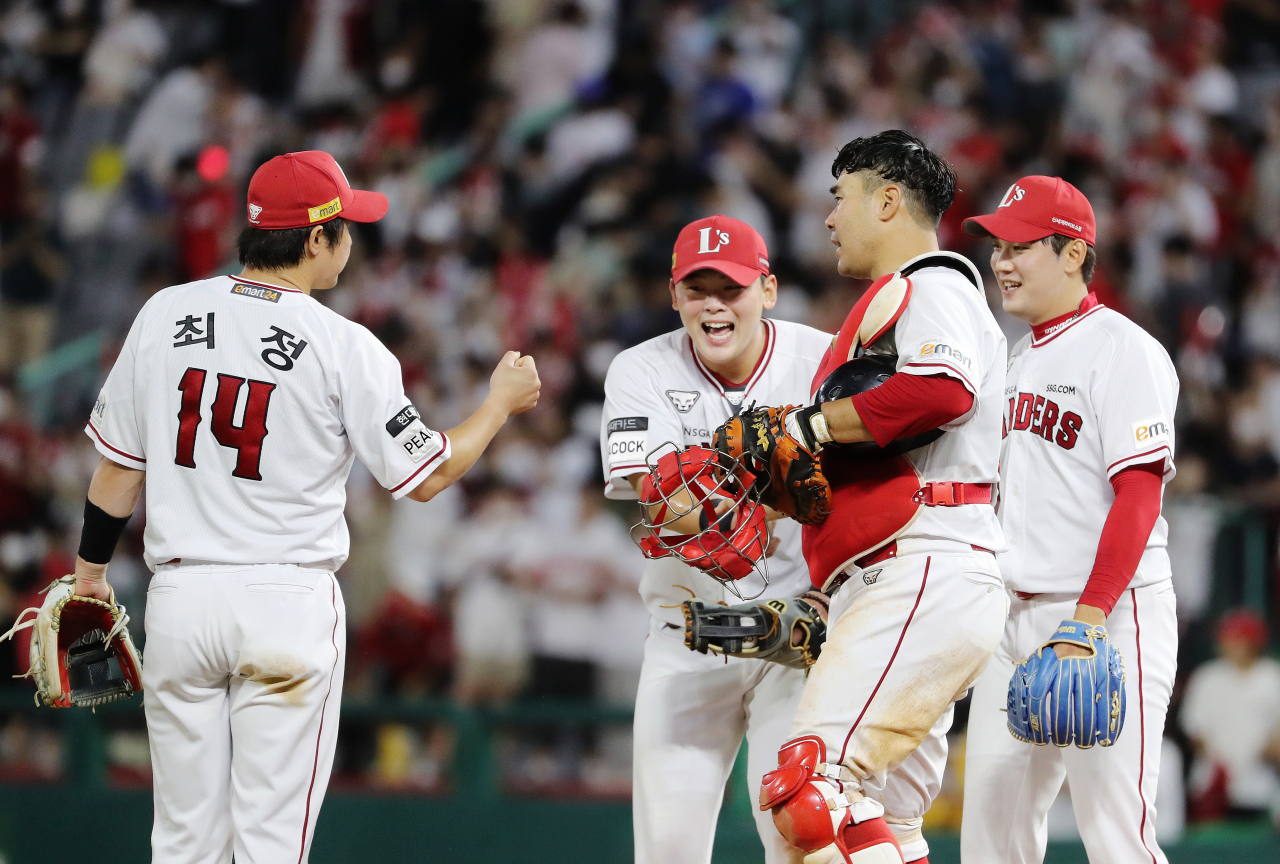 The SSG Landers have been at the top of South Korean baseball all season, and as the second half of the 2022 campaign resumes Friday, they will try to do the unthinkable: going wire to wire to win the pennant.

The Landers (57-26-3) have already set a Korea Baseball Organization (KBO) record by spending 86 games and 104 days in first place from the season's start. No club has ever spent an entire season at the top in the league's 41-year history.

The Landers, currently riding a six-game winning streak, have a 4.5-game lead over the Kiwoom Heroes. There is still too much baseball left -- the Landers have 58 games remaining, one more than the Heroes -- to say everyone else will be playing for second place. But with reinforcements on the way to help an already talented roster, the Landers should at least be able to keep themselves in the hunt for the record.

The Landers' streak of being in first place is more remarkable because they did it without one of their foreign pitchers, Ivan Nova, for the final month of the first half. The injured right-hander was released and was replaced by Shawn Morimando last week.

Their first baseman Kevin Cron might as well not have been there for the last month or so, since he batted just 3-for-41 in his final 16 games before getting cut. The Landers signed former Gold Glove-winning outfielder Juan Lagares in Cron's stead.

Both of the new imports will make their KBO debuts in the second half. The Landers recently welcomed back right-hander Moon Seung-won following a lengthy rehab from an elbow surgery. Another pitcher who underwent elbow operation last summer, Park Jong-hun, is expected to rejoin the staff sometime in the second half too.

The Landers already have a stout five-man rotation, fronted by Kim Kwang-hyun and Wilmer Font, who are ranked No. 1 and 2 in the league in ERA. Morimando and Park should be able to give incumbent starters extra rest as the season nears the stretch drive.

The Landers will open their second half with a three-game series against the Doosan Bears.

The Heroes are trying to win their first Korean Series title, and their All-Star outfielder Lee Jung-hoo will need help. He was voted the Player of the Month for June but has cooled off in July, batting only .194. It would be the lowest monthly batting average of his six-year career if the month ended today.

Taking on the Samsung Lions to start the second half could be just what the doctor ordered for Lee, who has batted .405/.476/.595 against them in 2022. The Lions have dropped a franchise-worst 11 straight games and have beaten the Heroes only once in nine meetings so far this year.

The LG Twins, trailing the Heroes by a half game in third, will visit the NC Dinos for the weekend. The KT Wiz, defending Korean Series champions who have crept up to fourth place after a mediocre start, will have a juicy matchup against the Hanwha Eagles, the KBO's worst team and losers of six straight.

The Kia Tigers and the Lotte Giants, the two clubs locked in a battle for the fifth and final playoff spot, will meet for three games at the Giants' home in Busan, starting Friday.

The Tigers lead the Giants by four games. The Giants have won four straight and will welcome new outfielder Zach Reks, who signed with the KBO club Wednesday to replace DJ Peters. (Yonhap)