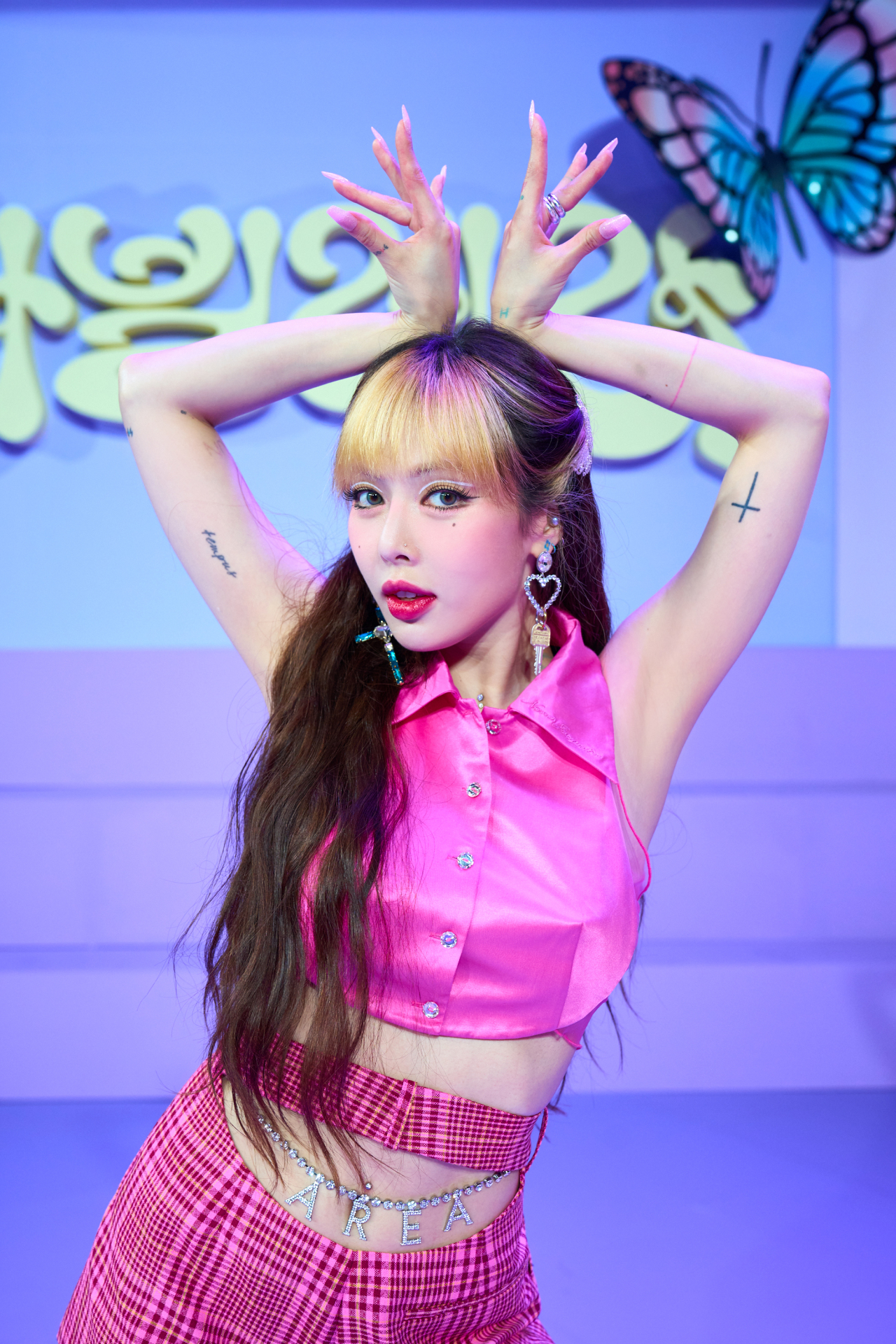 HyunA conducts a media showcase for her eighth EP, “Nabillera,” in Seoul on Wednesday. (P Nation)
K-pop soloist HyunA’s new album is titled “Nabillera,” a Korean phrase that means “to fly like a butterfly,” according to the artist’s explanation.

Speaking about the album through an online press conference conducted on Wednesday afternoon ahead of the release later that day, HyunA said, “the title conveys my will to fly softly like a butterfly on the hearts of the listeners. I want to leave my trace wherever I go, and I hope that many people could think of me while listening to the song.”

While HyunA likened the album to a butterfly’s fluttering wings, the album’s lead single of the same name and music video comes off as more akin to a powerful beating of wings.

“Nabillera,” HyunA’s eighth EP after 1 1/2-year break, is a Latin-infused dance tune of a minimal beat and tropical rhythm that is refreshing to the ears of listeners this time of the year. In the music video, HyunA radiates a commanding energy as she moves in a tight unison with the pack of dancers to the Macarena-inspired choreography.

Just as with her previous title song, “I’m Not Cool” that dropped in January 2021, HyunA wrote the lyrics of “Nabillera” with Psy, the “Gangnam Style” hit-maker and chief of her label P Nation, and with her boyfriend Dawn, who is also her label-mate and a K-pop singer himself.

“I want to put it like this: Psy and Dawn gifted me the song,” she said. “When I was in Paris, Psy sent me the line that goes, ‘Just because I’m your babe, that doesn’t make me yours.’ At first I didn’t really get it, but I discovered myself singing the line. It was so addictive and I thought ‘this was it.’”

About Dawn, her partner of over six years, HyunA said, “Dawn wrote good lines because he knows me so well.”

The couple recently announced their engagement through separate photos posted on social media in which Dawn wrote, “Marry Me” and HyunA wrote, “Of course, yes.”

The five-track album is also packed with other songs that carry the unique sounds of the musician. HyunA contributed as lyricist and composer of the B-side track “Picasso & Fernande Olivier” and “Watch Me,” the latter of which she initially made as a gift to her stylist, hairdresser and make-up artist -- her colleagues and close friends -- to share her gratitude.

Dawn also added color to the album with “Bad Dog,” as the co-lyricist and co-composer. The last track, “Whatever,” was a present to HyunA by the popular singer-songwriter Sungwoo JungA, according to HyunA. 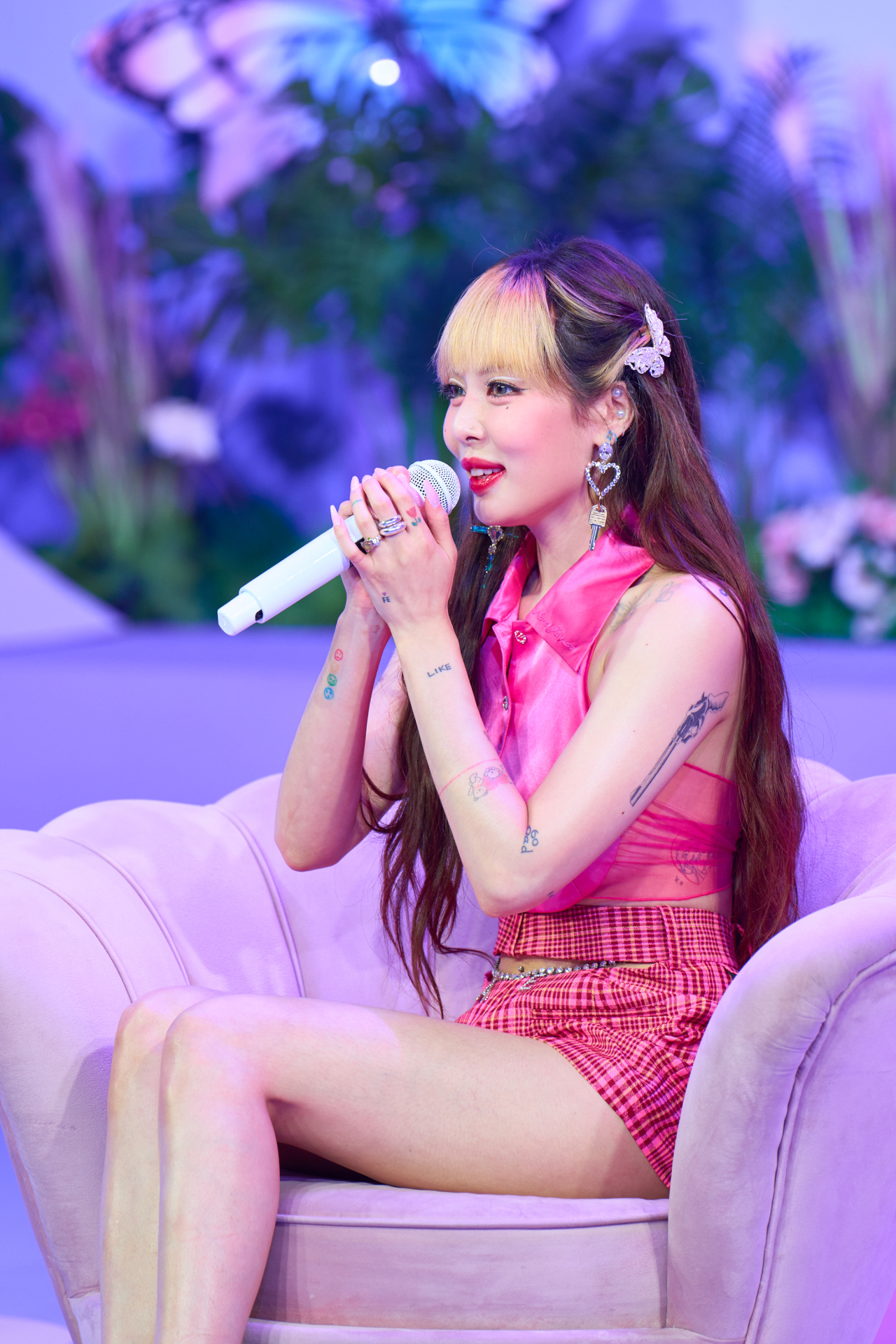 HyunA conducts a media showcase for her eighth EP, “Nabillera,” in Seoul on Wednesday. (P Nation)
She said she didn’t realize that so much time had passed since her last solo stage as she had been so immersed in the preparations. Having devoted her everything into it, HyunA said she was so overwhelmed with emotions listening to the full album for the first time.

“I listened to the album in the car alone, and I cried. I was so surprised at myself that I listened to it again, and I realized that I cried because I loved it so much. I used to have one or two favorite tracks from my previous albums, but this one, I really adore each one equally,” she said.

HyunA seemed to have put behind her some rough times, revealing that she is now ready to share a genuine smile onstage.

“I couldn’t smile on the stage during the ‘I’m Not Cool’ promotions. But this time I hope to smile naturally and also show that the place where HyunA shines the brightest is on the stage,” she said.

HyunA, into her 15th year in her music career, first debuted as a member of the group Wonder Girls in 2007. Spending only a year in Wonder Girls, she joined another girl group, 4minute, in 2009 before becoming a solo musician in 2010.

Speaking about her 15 years as a K-pop musician, HyunA’s eyes glistened like the first day she debuted.

“I find every day new. I’ve lived every day to its fullest, savoring every moment. Fifteen years have gone by in a snap and although I’ve gone through so much, I can still remember everything clearly as if it was yesterday,” she said.

In recounting her journey as a musician, the 30-year-old artist said she aimed for nothing but dreamt of the infinite.

“A dream is something that you want to continue doing in the future, and what I can never lose in my life and that makes me the happiest is the stage, so I want to stay healthy throughout my life for this dream,” she said. “A goal is something that you want to achieve, but I’ve achieved everything I wanted to. I don’t have any goals and I’m in a very content state right now.”