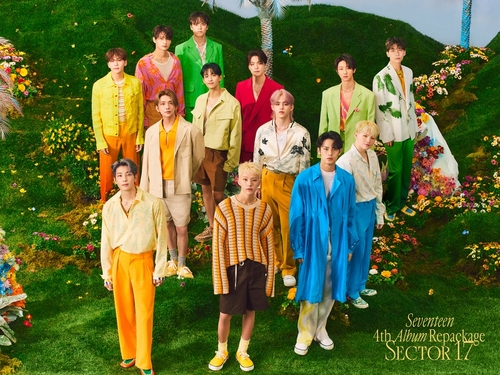 K-pop boy group Seventeen will return Monday with a repackaged version of its fourth studio album, "Face the Sun."

The new album titled "Sector 17" is to hit online music services at about 6 p.m., according to the band's agency, Pledis Entertainment.

"Sector 17" will have four new songs, including "_World," "Fallin' Flower" and "Cheers," in addition to nine tracks off "Face the Sun," the agency said.

The main track, "_World," is a song of funk and urban R&B genres, featuring a funky rhythm and a sweet melody.

Team leader S.Coups said in a press release from the agency that the group will become able to show its new and refreshing side with the upcoming album.

"We worked hard on this album for CARATs," member Dino said, referring to the name of the group's global fandom. "We hope the energy we want to convey to CARATs will be delivered well."

The album is sure to become a million seller as its preorders had surpassed 1.2 million copies as of Wednesday last week. (Yonhap)