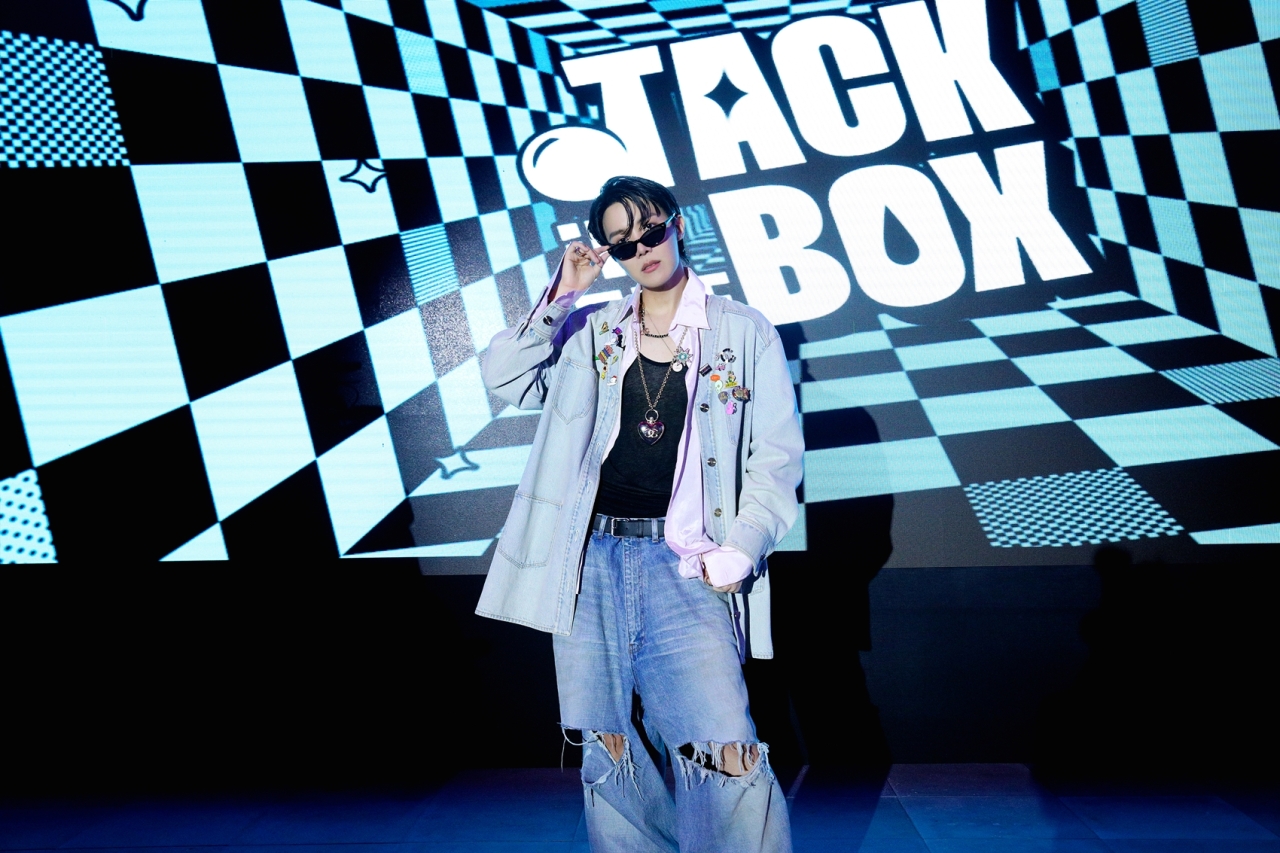 J-Hope of BTS (Big Hit Music)
J-Hope’s first-ever solo studio album “Jack In The Box” comes with a desire to make changes: It reflects his aspirations to break the mold and grow further.

The singer-turned-soloist is having fun with his solo venture, and his 10-song package describes how he is in the spring of his life. But unlike hopeful messages and bright tunes the boy band is known for, this time, J-Hope showed a new less-sunny side of himself.

Stepping away from the glitz and the glamour of BTS, he talks about the dawn of “J-Hope” as an artist and walks music listeners through how he planned his first studio album.

“Intro” and “Pandora’s Box” serve the opening course of “Jack In The Box” and introduce J-Hope as a soloist. 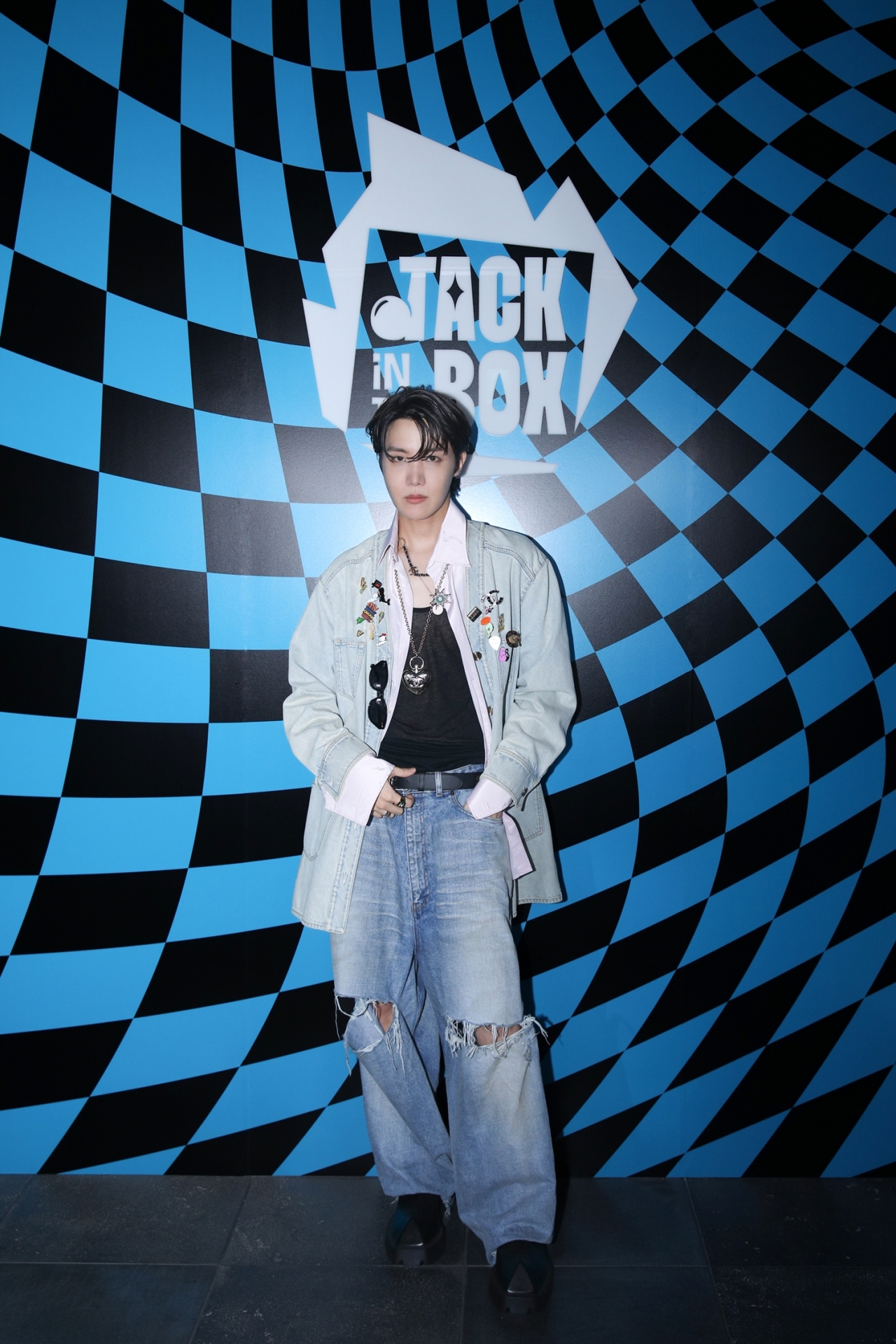 J-Hope of BTS (Big Hit Music)
Drifting away from BTS’ upbeat and fluffy sound, prerelease “More” is an old-school hip-hop song that interweaves frenzied drum beats and guitar sounds. Like the stylized, rhythmic backing, the lyrics convey J-Hope’s ambition to step outside the box -- the main theme of the album.

This is followed by two tracks that talk about humanity.

On fourth track, “Stop,” J-Hope blends his thoughts on human nature. And “= (Equal Sign)” expresses his appreciation for diversity, conveying a message that people’s distinctive features should be valued and respected. And as the title suggests, the words to the two-minute track declare “Not so different, you and I /Looking for love in a different light /Until we find that equals sign.”

The sixth track on the album drives the album’s storyline. If the previous tracks show how J-Hope wants to step outside the box, “Musix Box: Reflection” signals him boldly marching into the world to show his other side.

The album then suddenly takes on a dark ambiance with “What if…:” a track that goes over the fear of having no hope, dream or passion. But just like his signature phrase, “I’m your hope, you’re my hope,” the song verbalizes how his growth and versatility wouldn’t blossom without times of trouble, telling listeners: Don’t be afraid to push the envelope.

“Safety Zone,” runs a groovy beat across soothing music. As the title suggests, it’s about wanting to find a refuge; as J-Hope says, “Where is my safety zone, left, right, go straight,” throughout the whole track. 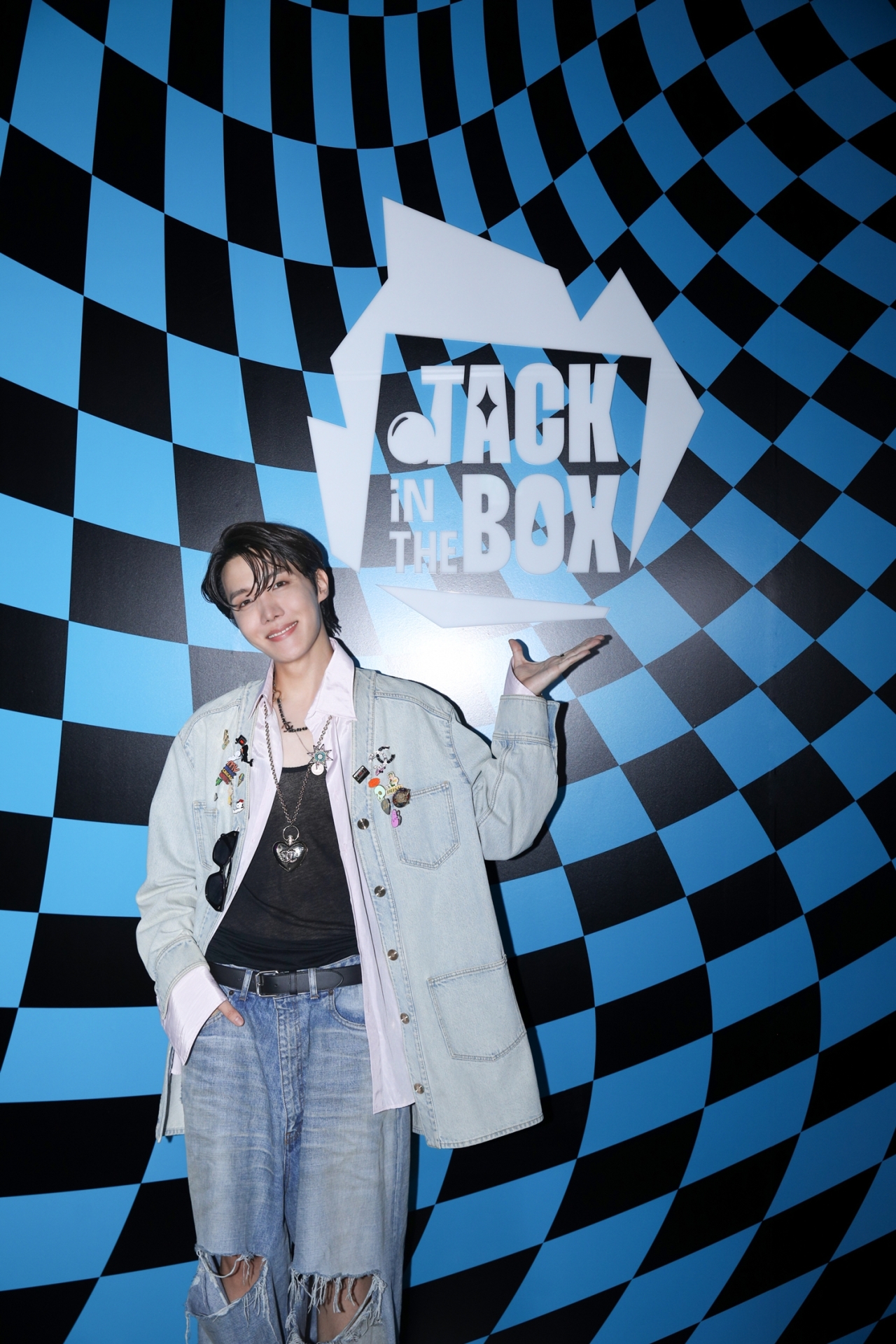 J-Hope of BTS (Big Hit Music)
“Future” is a bright-themed song where J-Hope treads across the two-minute track to show how he has become the subject of his life. “I was a kid who loved to dance. I’m thankful for who I am (unofficial translation),” the lyrics say, hinting at the agility that helped him be a music icon.

The last track on the album is “Arson,” another lead track of “Jack In The Box,” which is J-Hope’s story about confronting the world outside the box and standing at a crossroads. As arson is the act of setting a fire, the rapper aims to stage his burning passion.

On Thursdsay, J-Hope held a listening party to talk about his album with other musicians and directors. The star-studded event was attended by Tae-yang of Big Bang, actress and singer Uhm Jung-hwa and BTS bandmates, among others. 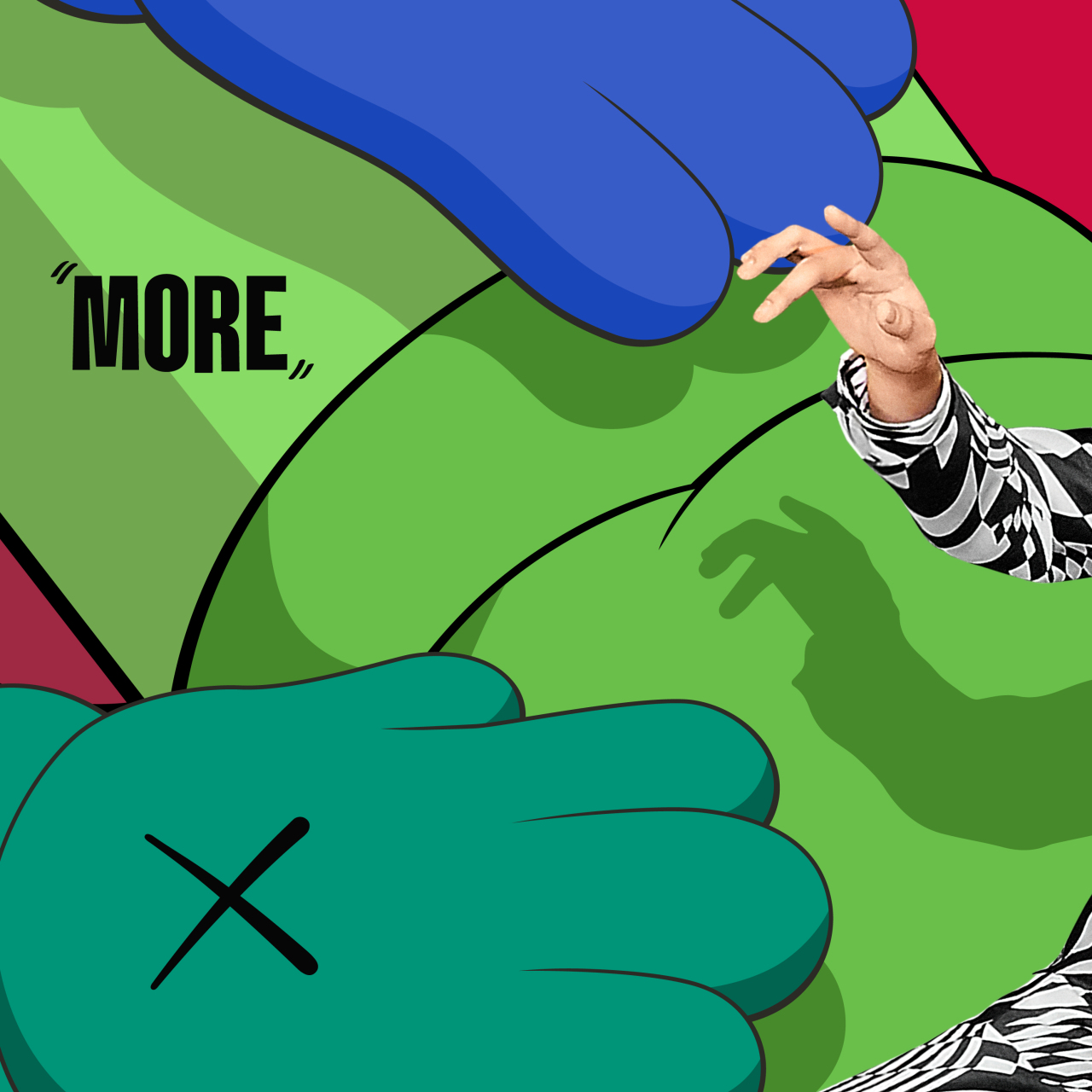 J-Hope of BTS (Big Hit Music)
“I was happy when I first got the offer to work on J-Hope’s solo cover. We’ve been in touch for several years, and I’m delighted to be able to take part in his solo project,” the New York-based artist said via a press release.

J-Hope also wrote in an Instagram post that KAWS always had a special place in his heart, saying “the project is much more meaningful and a huge honor” for him. 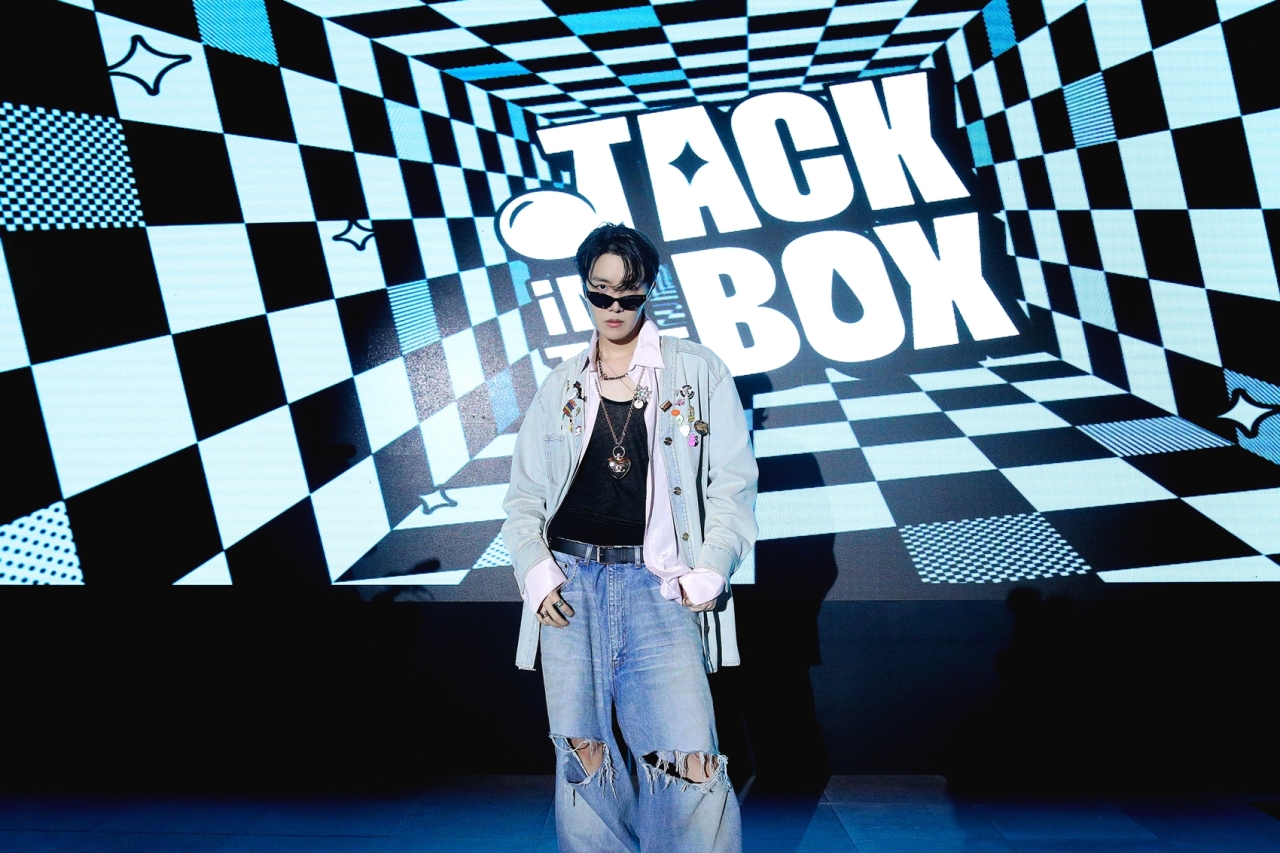 J-Hope of BTS (Big Hit Music)
Released Friday, the new album is available digitally through the Weverse Album app, where it can be played after downloading on the app of the same name and scanning the QR code.

Meanwhile, J-Hope will fly to the US after dropping his solo album. He will grace Chicago’s four-day Lollapalooza on July 31, becoming the first South Korean artist to headline the main stage at a major music festival in the US.