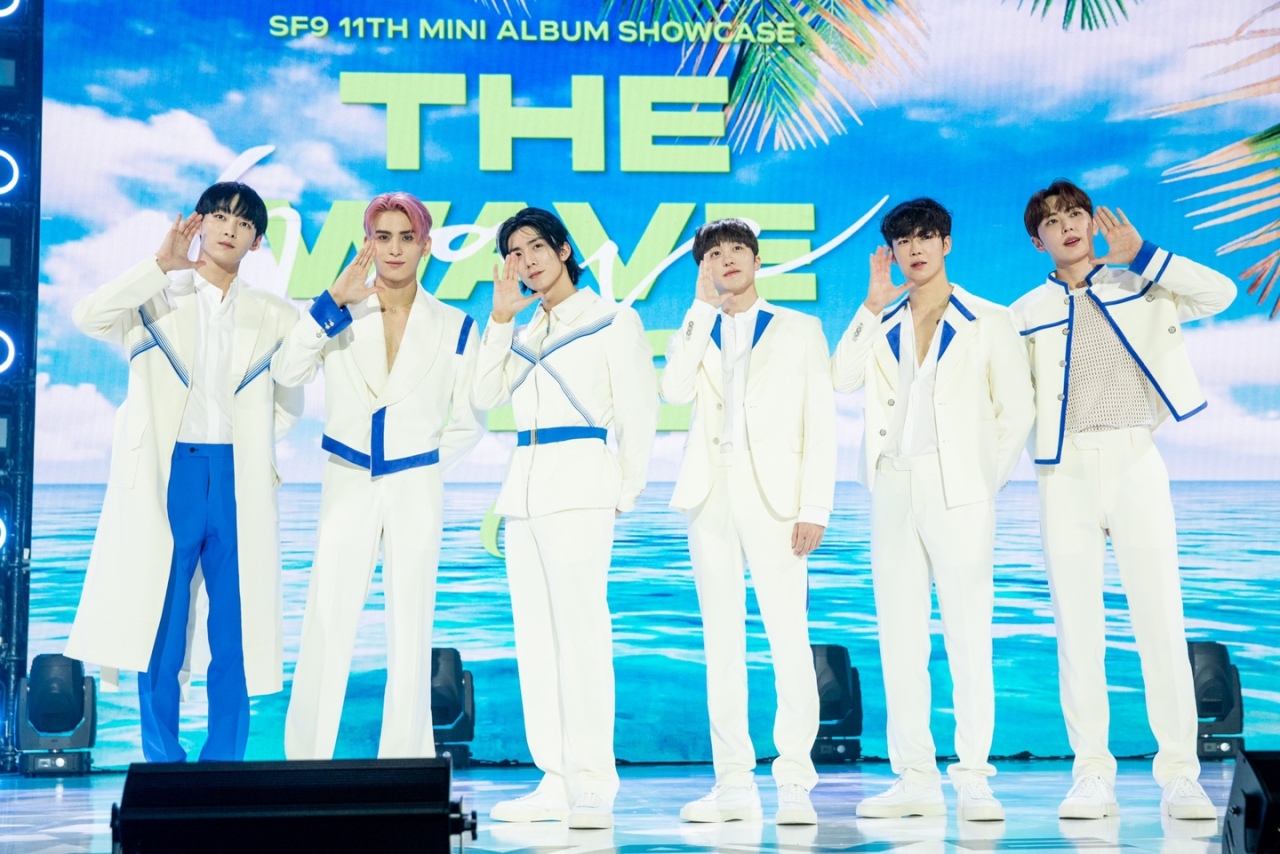 SF9 poses for picture during 11th EP "The Wave Of9" media showcase conducted in Seoul on Wednesday. (FNC Entertainment)
Returning to the music scene after eight months, boy band SF9 embarked on a new journey as a sextet with the group’s 11th EP, “The Wave Of9,” Wednesday.

Ahead of dropping the new album that evening, six members of the originally nine-member group -- Jaeyoon, Zuho, Dawon, Yoo Taeyang, Hwiyoung and Chani -- conducted a media showcase in Seoul.

Inseong and Youngbin were absent due to their mandatory military enlistment, while Rwoon could not take part in the activities due to a scheduling conflict.

Leading off the new album is “Scream,” a dance R&B tune packed with the band’s iconic sensual sounds popping with summer freshness.

“We tried to show our natural colors through the song. At the same time, it rings out the sporty and young vibe. We hope everyone can enjoy the song,” Chani said during the event.

Hwiyoung added about “Scream,” “As we have not been to scream out loud with our fans due to COVID-19, the title bears our wishes to scream out loud and have fun on the stage. The song has points to watch out for in terms of the performance, so we picked it as our lead song.”

On Wednesday, the band performed the lead single and one other new track, “OK OK,” live during the media showcase. Zuho took part in writing lyrics of four songs on the new album, including “OK OK.”

Also included among the album’s six tracks was Hwiyoung’s first self-written song, “Butterfly,” which tells the story of the bandmates’ youth.

Debuting on the K-pop scene in 2016 with the single “Feeling Sensation,” the band has now entered its seventh year. Turning the page to the journey ahead, the bandmates said the new album will shed more light on the individual strengths and character of each of the six bandmates.

“We’re not yet used to the number ‘seven,’ perhaps because we’ve worked hard until now without looking back,” Yoo Taeyang said. “As a team, we thought about the direction we should take with our performances. This time, we tried to find a way to better bring each of the members into the light.”

Yoo Taeyang continued, adding his thoughts on the “new wave” washing over SF9. “Personally, I think we’re now at a stage where we can grow as individuals. We’re now going through a ‘wave of change’ during which we can reestablish our goals and directions for the future.”