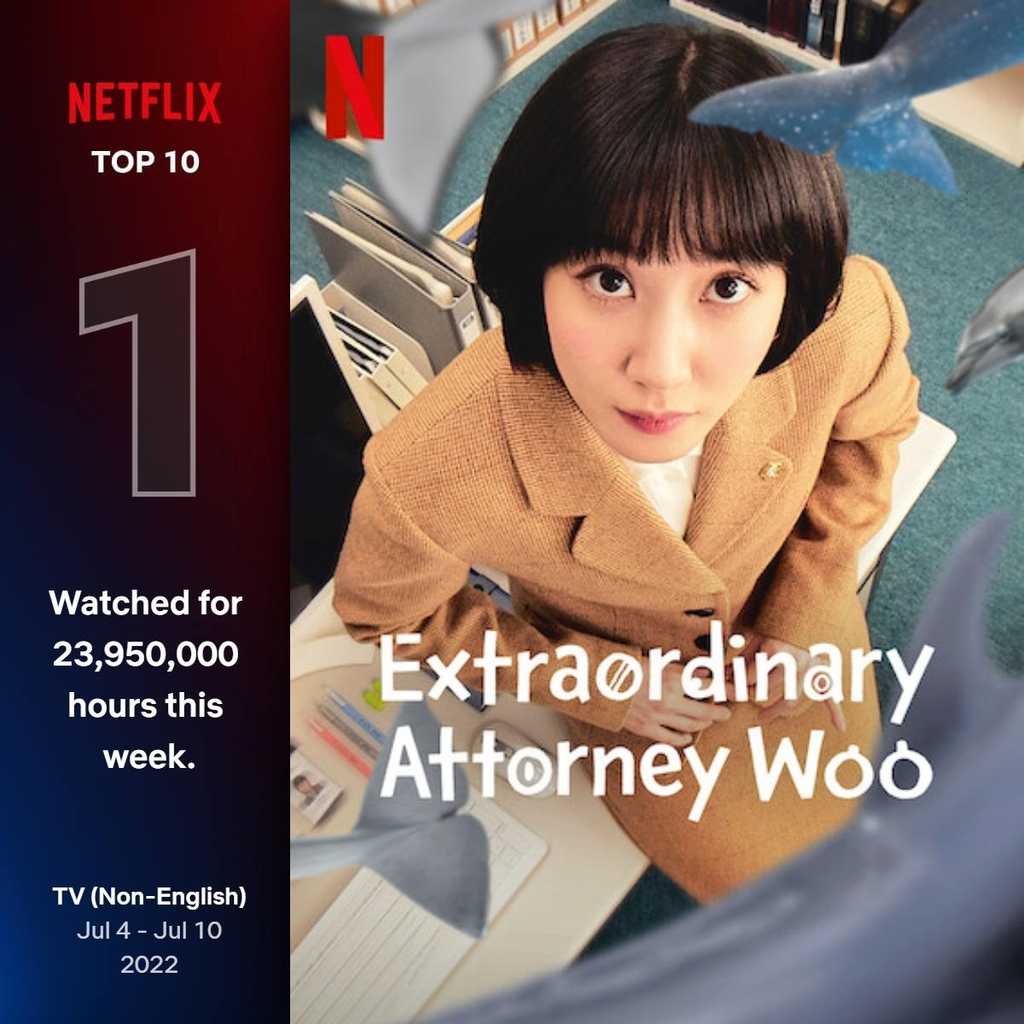 This image provided by Netflix highlights that "Extraordinary Attorney Woo" placed No. 1 on Netflix's weekly top 10 chart for non-English TV shows for the week of July 4-10. (Netflix)

The TV series, which has aired every Wednesday and Thursday on the cable channel ENA from June 29, marked 23.9 million hours of viewing for the week of July 4-10 to lead Netflix's official top 10 list for non-English TV programs available on the service, according to the company.

It became the second Korean-made TV series that is simultaneously streamed on a local TV channel and on Netflix to rank No. 1 on the official viewership chart, following the romantic comedy "Business Proposal" (2022).

And it is the eighth Korean-language show that has topped the weekly chart for the category that includes Netflix originals, like the global sensation "Squid Game" (2021) and "All of Us Are Dead" (2022).

The series made the top 10 on the most-watched non-English TV show table in 12 countries over the one-week period and topped the list in three nations, including South Korea and Taiwan.

It is now available for Netflix viewers in Asia and North America with subtitles in 10 languages.

"Woo" revolves around a lawyer named Woo Young-woo (Park Eun-bin), who is brilliant and smart with outstanding memory but lacks social skills and empathy due to being on the autism spectrum. As a rookie lawyer at a law firm, she attempts to practice law and win cases, facing prejudice against her and those on the spectrum.

Since its release, the show has won rave reviews at home and abroad for its well-rounded storyline and a balanced and heartwarming look at autistic people with difficulties in social interactions and communication.

In South Korea, its viewership hit 5.19 percent for the latest fourth episode aired last Thursday, up sharply from 0.95 percent for the first episode on June 29. The number is the highest for the little-known cable channel ENA launched in 2004.

At the same time, "Woo" started to create a buzz outside Korea, making the top 10 on a daily global chart for TV programs on Netflix released by streaming analytics company FlixPatrol on Sunday.

It has topped the daily list at least once in eight countries, including Japan, Vietnam and Indonesia, since its release.

The global popularity is expected to accelerate as "Woo" will be also available in Europe and South America from Wednesday with subtitles in 31 more languages. (Yonhap)