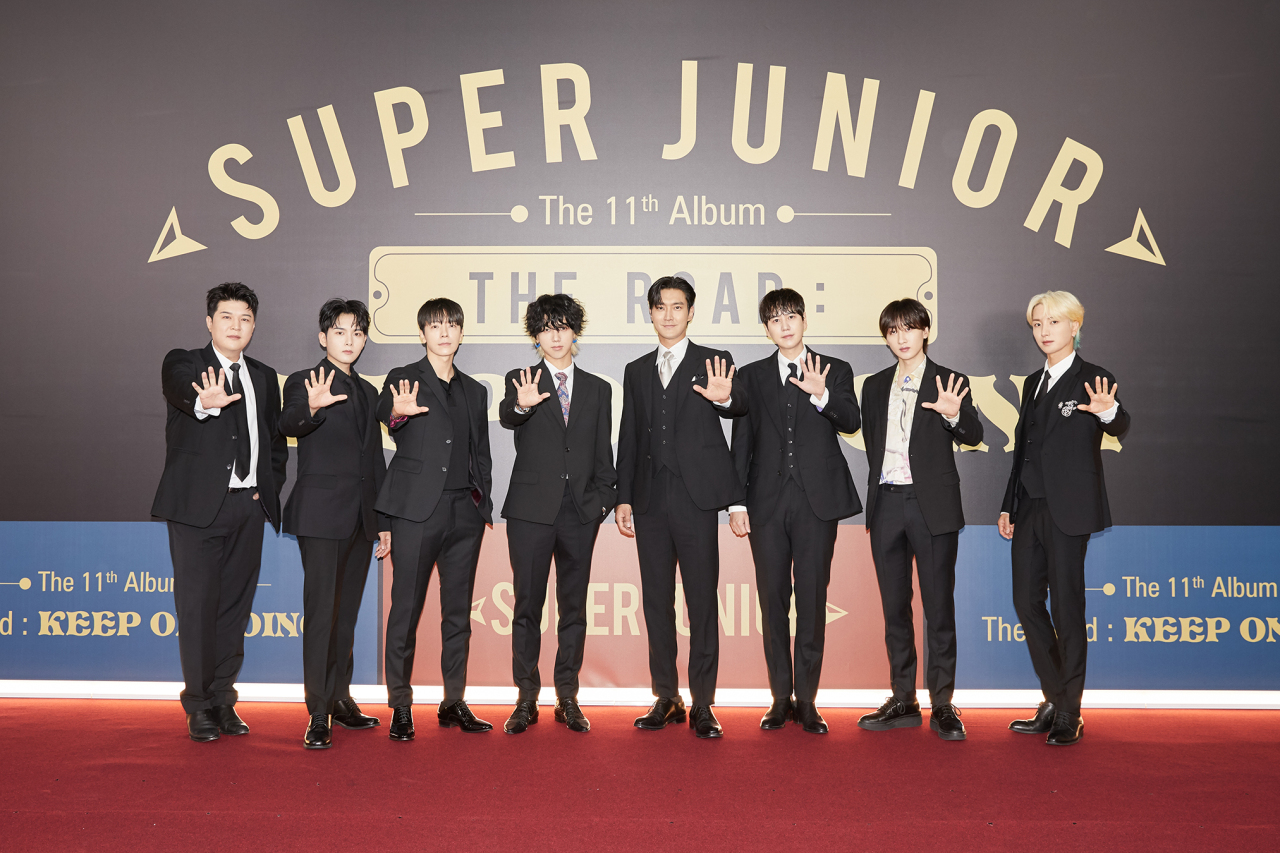 Members of Super Junior pose for photos during an online press conference for the group’s 11th full-length album “Vol.1 ‘The Road: Keep on Going’” on Tuesday. (Label SJ)
K-pop guru Super Junior has returned to the stage with new songs, setting a remarkable record as the act with the most full-length albums under SM Entertainment.

The nine-member group held an online press event on Tuesday ahead of its new album release at 6 p.m. on the same day. Leeteuk, Eunhyuk, Kyuhyun, Donghae, Siwon, Yesung, Ryeowook and Shindong attended the event, with Heechul absent due to a schedule conflict.

“Although there are several artists with long-running music careers under SM, Super Junior has become the first group to reach 11 full-length albums. The new release means more to us. We’ve prepared a lot for the album since Super Junior appears to have decorated a page of K-pop history,” the act’s leader Leeteuk said.

The band’s new album, “Vol.1 ‘The Road: Keep on Going,’” marks a full-group return following the single “The Road: Winter for Spring,” released in February. The second volume of the album will be out this year, the group said.

Donghae said, “The album’s title means that Super Junior’s path will continue. It is about our past, present and future journey.” Ryeowook added that the group had recently joined SM’s “culture universe,” with the bandmates depicted as “space travelers.” After traveling to several planets, they reunited for the new album, he explained.

Leading the five-track album is “Mango,” a funk-based pop song with heavy, rhythmic bass and synth sounds. The song is a confession of love in a sweet-but-aggressive way. The four other tracks are “Don’t Wait,” “My Wish,” “Everyday” and “Always.” Aiki, from female dance crew Hook, directed the lead track’s performance.

About two weeks ago, the band released a music video for “Don’t Wait,” a prerelease song featuring Leeteuk dressed in women’s clothing. Talking about the viral scene, the group’s leader said that he had a meltdown while shooting the video. Shindong jokingly added that Leeteuk had wished for the role. 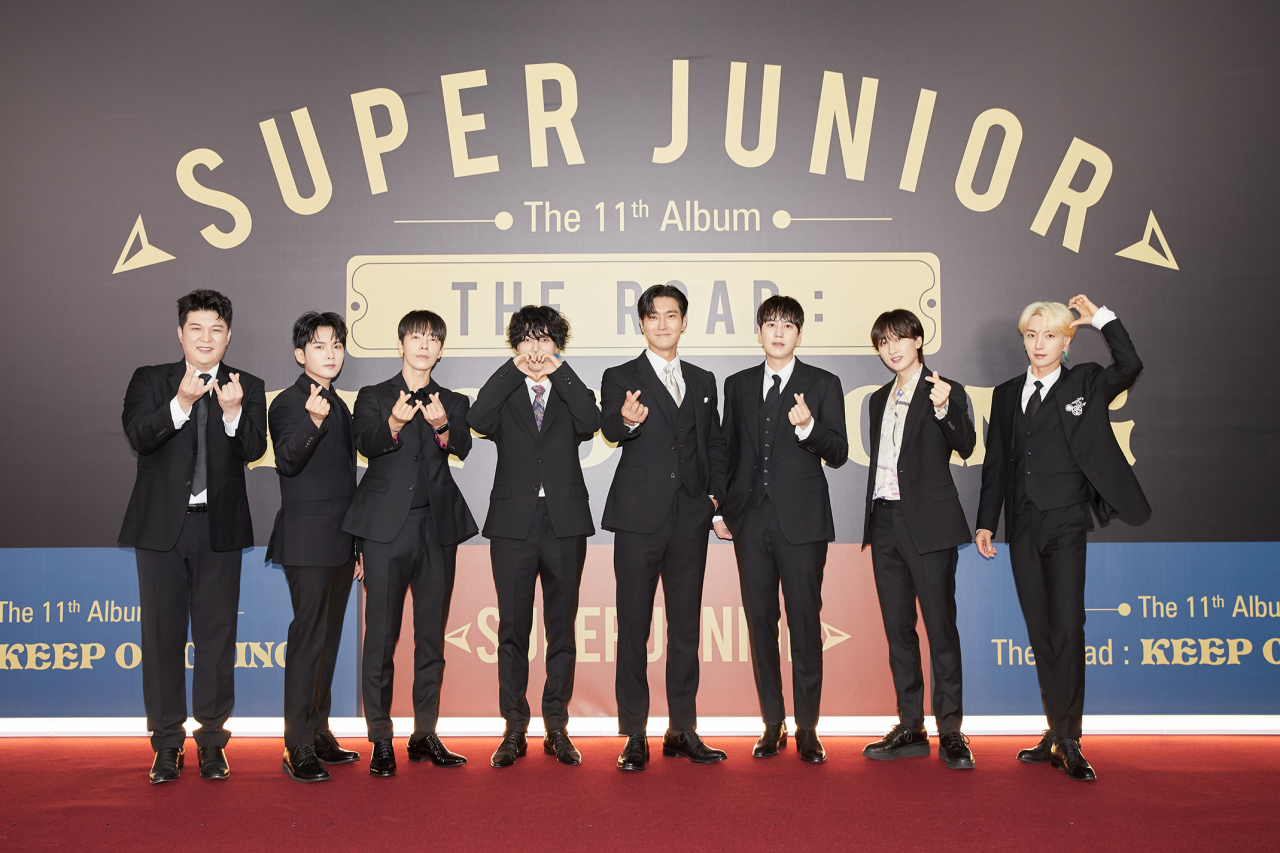 Members of Super Junior pose for photos during an online press conference for the group’s 11th full-length album “Vol.1 ‘The Road: Keep on Going’” on Tuesday. (Label SJ)
With the album release, the group is also about to embark on a world tour titled “Super Show 9: Road,” starting on Friday with a three-day concert at Jamsil Arena in Seoul. The group will visit countries including Thailand, Singapore, the Philippines, Indonesia and Japan, as well as places in Europe and South America, Leeteuk explained. The upcoming tour will be the first time in three years the group holds in-person concerts.

“It still feels like we’re dreaming,” Donghae said of the tour. Due to tour preparations, the act has not been able to appear on music programs, and is excited to be able to perform in front of a live audience again.

Since its debut in 2005, Super Junior has long been popular at home and abroad with a string of hit songs, such as “Sorry, Sorry,” “U,” “Mr. Simple” and “Bonamana.”

Still jaunty and playful as the group marks its 18th anniversary, the bandmates, all in their 30s, spiced up the conference with jokes and laughter when being asked to talk about the key behind its longevity.

Shindong thanked the band’s supportive label and jokingly asked for a huge down payment as he will soon renew his contract. Siwon, known as the humorous member, said that it was because of sophisticated socialism. Leeteuk also replied, “I’ll tell you the secret when I am a 100-year-old grandfather.” He then continued in a serious manner. “The secret to maintaining the team is that the members get scared easily. If someone said, ‘I’m not going to do it,’ the team would fall apart, but we don’t have a member who would dare say that,” the leader said.

“We hope to show that we’re still solid performers. Celebrities often end up becoming less influential and are forgotten as time goes on. But we want to prove that we are an act strongly connected to our fans while challenging ourselves to keep moving forward,” Leeteuk added.