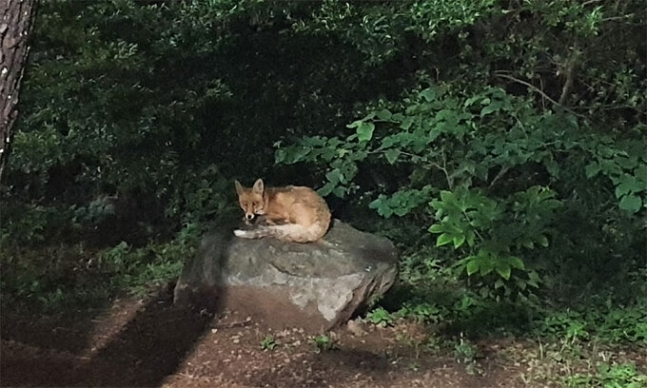 According to the park service under the Ministry of Environment, a male red fox, labeled SKM-2121, is currently living on a hill within the boundaries of Busan, having traveled some 200 kilometers south after being released in Yeongju, North Gyeongsang Province, in December.

The fox was born at a research institute under the Korea National Park Service in March 2021. After being set loose, the fox stayed some 80 days on the mountain ridges of Sobaeksan and traveled to Donghae, Gangwon Province, in February. Then, it took a turn south and headed down to Busan, arriving there after three months.

The park service is monitoring the fox’s movements around the clock through a tracking device implanted in its neck. It has also installed 10 unmanned monitoring cameras in the area for observation.

“Male foxes without cubs are mostly independent. SKM-2121 is suspected to have traveled a long distance to Busan based on such instincts, while also on the search for food and out of curiosity,” said Song Hyeong-keun, head of the Korea National Park.

The park service has warned residents in the area about safety measures, too.

It is working on bringing back the red fox species in Korea for wildlife preservation. It first released a red fox from its institute in 2012. Since then, 57 foxes have been released into the wild, giving birth to 17 more.