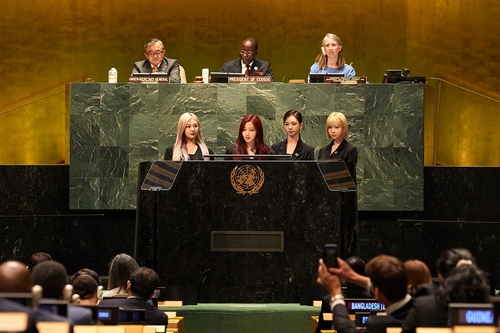 South Korean girl group aespa delivers a speech during the 2022 High-level Political Forum on Sustainable Development held at the UN headquarters in New York on Tuesday (US time), in this photo provided by SM Entertainment. (SM Entertainment)

Rising South Korean girl group aespa has called for future generations to pay attention to and take action for the sustainable development goals during a speech in a UN forum.

The band addressed the 2022 High-level Political Forum on Sustainable Development held at the UN headquarters in New York on Tuesday (US time).

"The metaverse reflects reality. If our own reality is not sustainable, it would become difficult to sustain the possibilities of the virtual world," member Giselle said after introducing aespa as a "metaverse girl group" for its use of four avatar members existing in the virtual world.

After the speech, the group played a video of it performing "Next Level," one of its hit singles.

The band is set to release its second EP, titled "Girls," on Friday. (Yonhap)