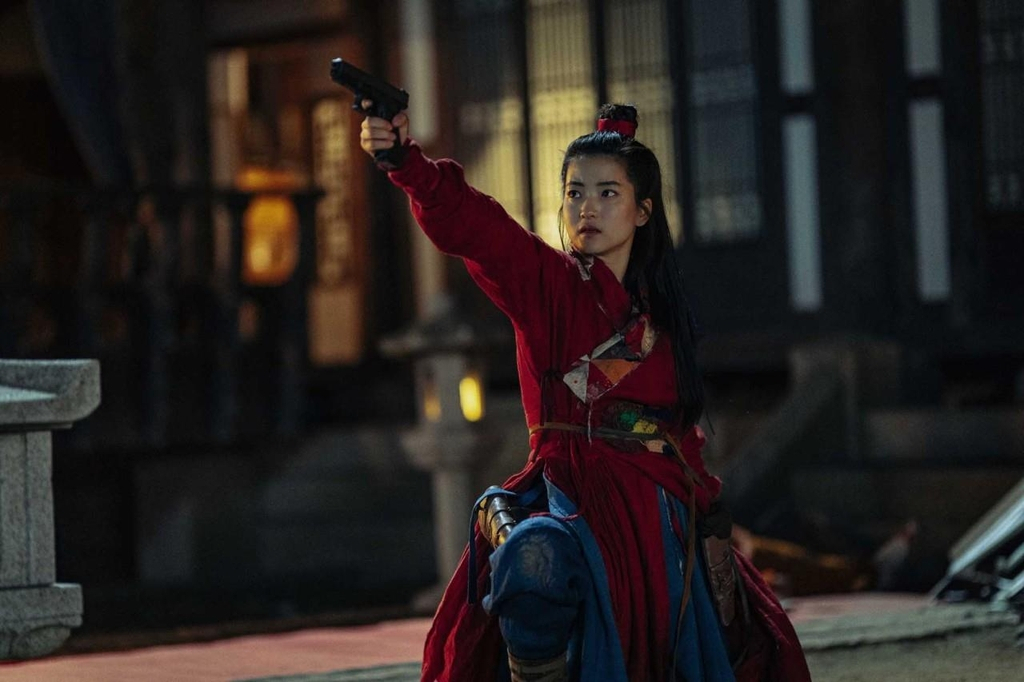 This image provided by CJ ENM shows a scene from "Alienoid." (CJ ENM)

The local box office in the upcoming summer peak season will highly likely be a four-way race among Korean blockbusters as theaters are gearing up for a continuous rush of filmgoers.

The new film by popular filmmaker Choi Dong-hoon, who has made many smash-hit films, including "The Thieves" (2012) and "Assassination" (2015), depicts two parallel worlds of the 14th and 21st centuries that start to connect with each other as the gates of time travel open due to a mysterious force.

It is one of the most anticipated films in the summer vacation season for its star-studded cast, including Kim Tae-ri, Kim Woo-bin, Ryu Jun-yeol and So Ji-sub, and crew members, including production designer Lee Ha-jun of "Parasite" (2019).

The second installment of Kim's trilogy about battles led by Adm. Yi Sun-sin depicts the historical Battle of Hansan Island on the southern coast of Korea in July 1592. It is one of the biggest victories that the Joseon Dynasty (1392-1910) pulled off against Japan during the country's Invasion of Korea (1592-1598).

It is highly expected to continue the bullish run by its predecessor, "Roaring Currents" (2014), the most-watched film in Korean box-office history with more than 17 million moviegoers.

Next is the aviation-disaster movie "Emergency Declaration," set to be released Aug. 3.

Starring Cannes-winning actors Song Kang-ho and Jeon Do-yeon, the film by Han Jae-rim tells a story about a flight from Seoul to Honolulu and its captain who declares an emergency declaration after a deadly virus planted by an unknown terrorist kills a passenger.

It was one of the official selections of the 2020 Cannes Film Festival, whose physical edition was canceled due to the pandemic, but its release has been postponed for more than two years.

Starring Lee and Jung Woo-sung, the espionage film is a story about two rival intelligence agents in South Korea, Park Pyong-ho (Lee) and Lee Jung-do (Jung), who separately chase after a North Korean spy leaking top secret information that could jeopardize national security. The two end up discovering a plot to assassinate the South Korean president.

Insiders expect the four blockbusters to accelerate the ongoing upbeat cycle at the local box office led by the Korean action comedy "The Roundup" in the spring.

Released in May, the sequel to the 2017 hit "The Outlaws" had garnered a total of 12.5 million admissions as of Tuesday, becoming the 14th most-watched film of all time in Korea.

The number of moviegoers reached 15.5 million in June, rising nearly back to the pre-pandemic level.

It is the highest monthly figure since the 16.84 million from January 2020 -- the last full month before the COVID-19 pandemic hit. (Yonhap)