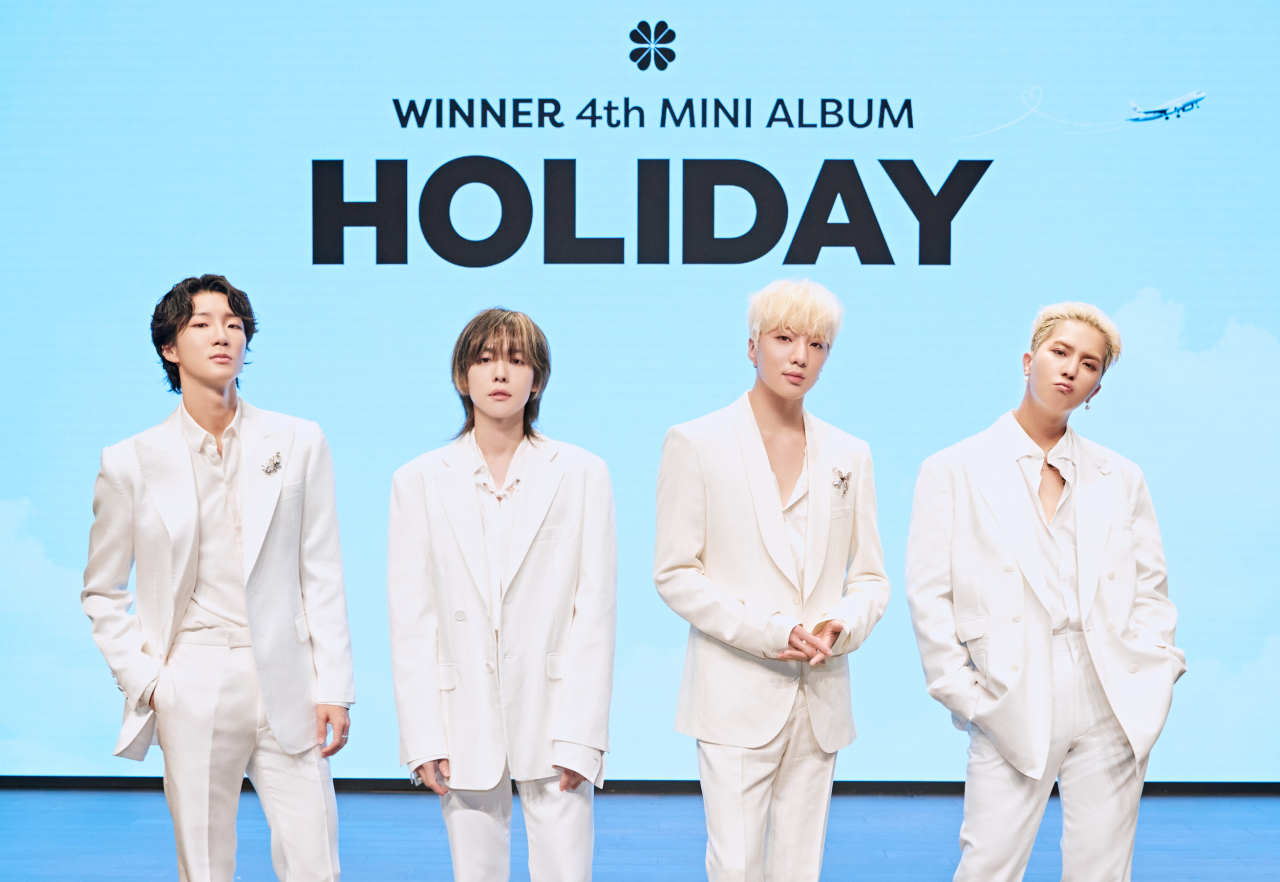 Nine years into its K-pop career, Winner declared it is embarking on a second chapter as a four-piece group with the fourth EP “Holiday.”

“This is the starting point as Winner begins the second part of our journey. The members are all in their 30s now, and the album conveys the good energy of the more vigorous future laid out in front of us,” Winner’s leader Kang Seungyoon said in a press conference for the album on Tuesday.

Ahead of dropping the new album in the afternoon, the four members of Winner -- Seungyoon, Mino, Jinwoo and Seunghoon -- conducted a press conference at YG headquarters in Seoul.

Making a full-group comeback after two years and three months, the group is splashing onto the summer scene with its signature “Winner pop,” a term coined for the K-pop band’s iconic pop tunes by fans for the delightful, refreshing sounds.

According to Seungyoon, who also took part in the overall production of the album and its six tracks, “Holiday” is a package of feel-good sounds dropped in time for the summer holiday season.

“As the title shows, the album is made up of songs that are healing and easy to listen to. We hope everyone could enjoy the holiday with the album,” he said.

Fronting the EP is “I Love U,” a pop tune overflowing with bright, boisterous energy with lyrics making a bold confession of love.

“While it’s easy to say ‘I love you,’ the world has become such a rough place for love to be expressed. We wanted to say through it that, even in such world, we’ll shout out love more loudly,” Seungyoon explained.

“I Love U” also received contributions in part from the band’s colleagues at YG Entertainment, Lee Chan-hyuk of sibling duet AKMU and Bang Yedam of rookie boy band Treasure.

“The best thing working in this new headquarters building is that we have more time mingling with the all the affiliated artists, and it enables more frequent musical collaboration among us. We also naturally came to work with Yedam and Chan-hyuk as they were here when we were working on our album,” Seungyoon said, noting, “both are artists with astonishing talents and I learned a lot in the process with working with them.”

Seungyoon and the band’s two rappers, Mino and Seunghoon, are credited as lyricists on all six tracks of the album. 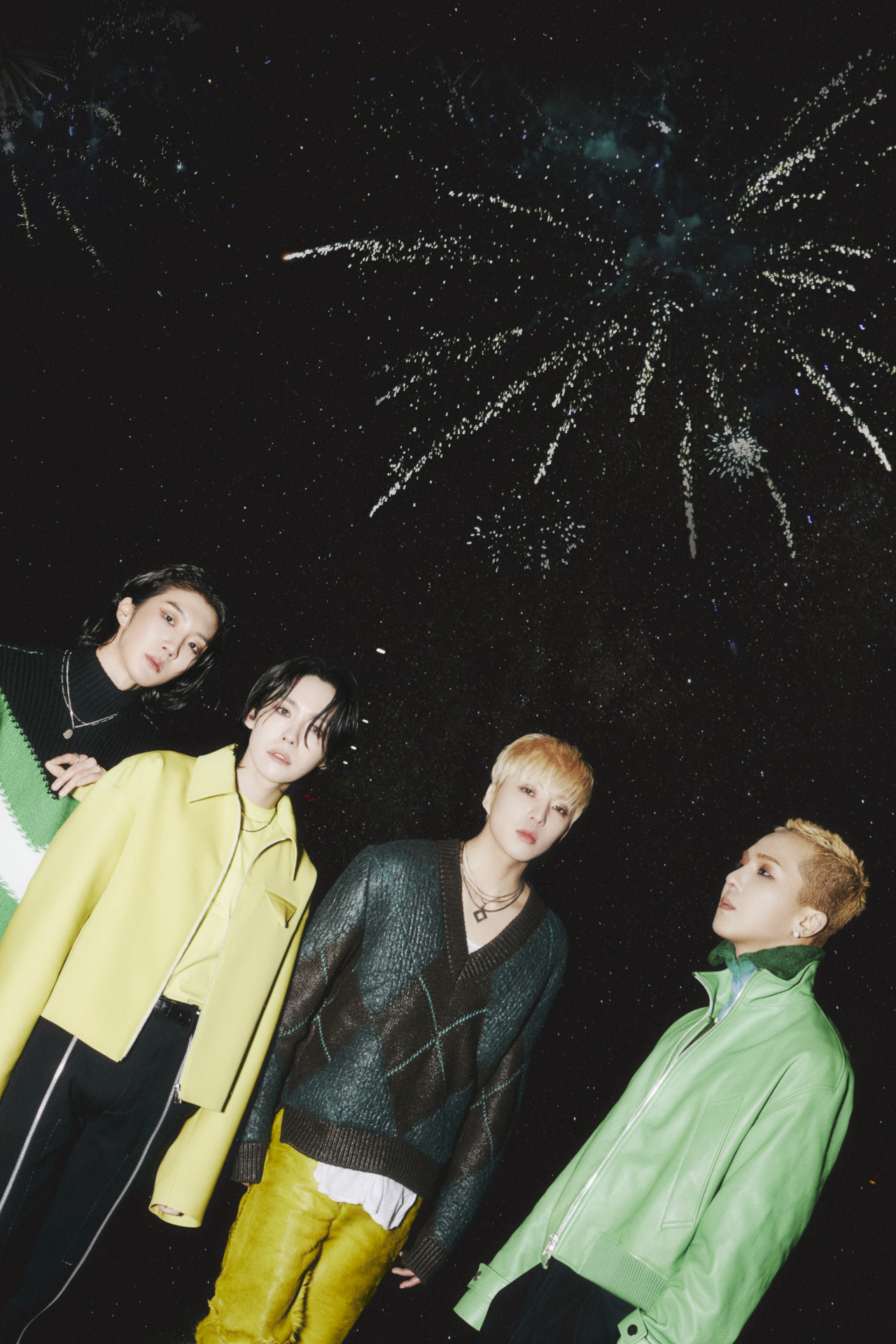 Winner’s “Holiday.” (YG Entertainment)
The comeback this time is more special as it is the first release following the return of Jinwoo and Seunghoon from their military service and the renewal of contracts with YG by all four members last year.

“The biggest concern in the renewal was the four of us being together. And we all signed with YG again because we have the staff members who we’ve been working together with since before our debut here,” Seungyoon said.

Seunghoon added, “We’ve been together for a decade now, including our trainee period. But we still have fun and feel happy just by looking at each other. And it was the company that has made it possible for us to be like this. We decided to renew out of our faith to the company and to keep our promise with fans.”

The band has another military hiatus ahead of it, however, as the younger Seungyoon and Mino are also obliged to enlist in the military before they turn 31.

While some K-pop boy bands break apart or lose popularity with the military service, Winner has proved they are back more intact with “Holiday” and promised they will stay so.

“I want the fans to not worry about our military hiatus. Just as I and Mino worked hard when Jinwoo and Seunghoon were away, the remaining members will fill in the gap for us. Although fans may still feel our absence, we just hope you don’t become too sad,” Seungyoon said.

Jinwoo said it actually may be a time that the bandmates need. “I actually found the period quite helpful. I had a lot of time to think and it helped me get a clearer head over things that had been mixed up inside me. I hope you understand that such time is not worthless.”

And “Holiday” is like the token of promise the quartet is presenting to fans and themselves.

“The four-leaf clover signifies good luck. If it loses a leaf, the whole meaning changes. We’re using it as our symbol this time along the same lines. We’ve discovered our luck and made our career by staying together, and we will continue to stick together without losing a leaf.”

Feeling more prepared than ever, the bandmates aspired to achieve higher with their new album.

“Of course we want the top spot. Our name is Winner,” Seunghoon said. “We’ve been working tirelessly since the moment we were discharged from the military, holding meetings every month. So, obviously, we want to make a good performance. But more than that, the chemistry between the members is closer and our tension higher than ever, and we anticipate this energy to lead to a good score. I’m confident.”

Jinwoo added, “I used to find it hard to wake up in the morning before, but these days I’m looking forward to every day. I’m spending happy days these days, excited to see the fans soon. Please look forward to our new album.”

Marking its ninth anniversary since 2014, Winner said it is time to turn the page to its second chapter.

“If the four members had walked the same path toward the same direction during Winner’s first chapter, the road will extend and stretch out in each of our directions. While we expand out into our own paths, we will bring back our experiences to do more things together. The four paths will go separately only to meet again. That is the second chapter of Winner that I have in my mind,” said Seungyoon.