According to industry sources, the carmaker has suspended plans to produce the next-generation Nexo, a hydrogen fuel cell SUV, which had been planned to be launched in the second quarter next year.

Nexo, succeeding the world’s first hydrogen fuel cell model Hyundai Tucson iX, made a highly-publicized debut in 2018, but the car has received lukewarm market reaction largely due to high pricing, delivery delays and a lack of infrastructure.

Hyundai sold less than 10,000 Nexos in the 12 months leading up to April, a long way off the sales of its full-electric Ioniq 5 compact. The South Korean carmaker sold more than 120,000 Ioniq vehicles worldwide, including some 33,000 units locally.

Sources also say that the carmaker’s luxury brand Genesis has also indefinitely postponed the launch of its first hydrogen fuel cell model, which had been expected to debut in 2025.

They say the delay suggests that Hyundai may have hit a snag in its drive to make a smaller and more powerful fuel-cell power source.

According to the carmaker’s hydrogen vision 2040, it would complete developing a third generation fuel cell battery system by 2023, which was to reduce its size by 30 percent compared to the second generation model and double the power output. It also planned to slash the price tag by half, to increase its product competitiveness.

But there has yet to be a breakthrough for this development -- not only in Korea, but also around the world.

“It would take at least 10 to 20 years to develop such technology. The previous Moon Jae-in administration publicly supported businesses’ efforts in advancing hydrogen fuel cell technology and even chose the Nexo as a presidential car. But it was a hasty decision because the infrastructure was not ready to make that happen,” said Kim Pil-soo, professor of automotive engineering at Daelim University.

Hydrogen technology has been touted as having potential to ease the effects on auto parts makers of the switch to electric vehicles, which require fewer parts because they operate without engines. But in order to make hydrogen cars as profitable as conventional ones, the industry as a whole needs to go through a simultaneous transformation and start mass-producing auto parts that would lower carmaking costs.

“Without mature technology and infrastructure, companies find it difficult to develop them as a profitable business model. No wonder carmakers in the US and Europe are not making hydrogen fuel cell cars,” he added.

Currently, there are only two hydrogen fuel cell models sold in the market: Hyundai’s Nexo and Toyota’s Mirai. US’ Stellantis is working the fuel cell versions of the Peugeot e-Expert and Citroen e-Dispatch, but neither of them have made a market debut.

Despite an apparent delay in technological advancement, Hyundai appears to be holding on to its hydrogen ambitions.

In its latest staff reshuffle, the company turned its hydrogen fuel cell battery development team into an independent entity to focus on the project.
In response ot questions on why the project was being delayed, Hyundai Motor CEO Chang Jae-hoon said in January that the company has just set a higher target for hydrogen vehicle development.

But experts are suggesting that the carmaker should shift its focus to commercial cars first because it’s more economical, even in the use of existing hydrogen technology. 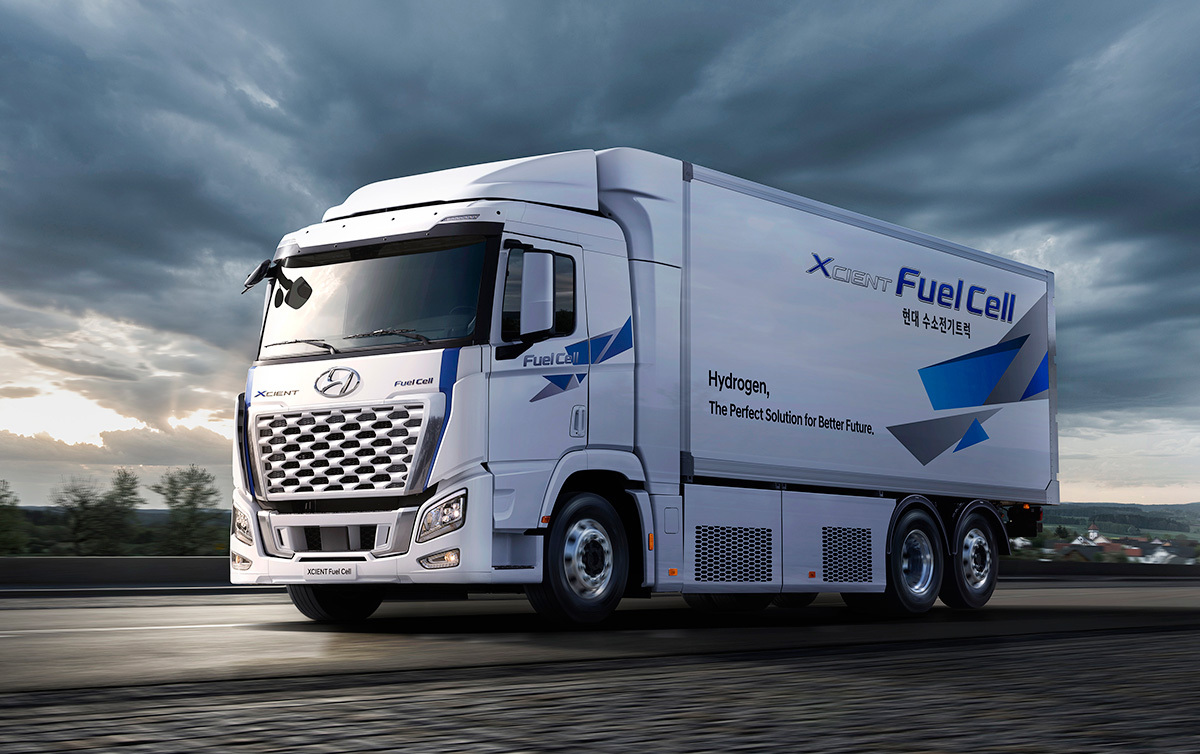 Hyundai Motor’s hydrogen fuel cell truck Xcient Fuel cell (Hyundai Motor Group)
The biggest advantage of hydrogen fuel cell trucks is that they are lighter than those with battery packs. Their charging time is also faster, at around 10 minutes versus about an hour for electric trucks to fully recharge. Hydrogen trucks can also travel up to 1,000 kilometers per charge, while it is limited to some 300 kilometers for electric trucks.