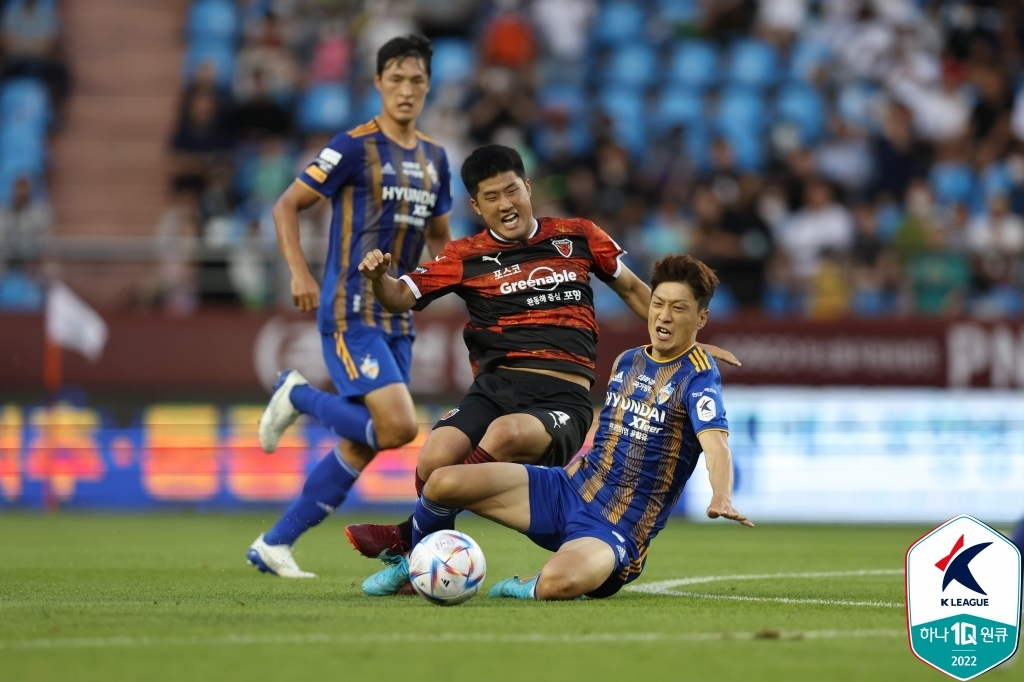 With their lead atop the South Korean football tables dwindling, Ulsan Hyundai FC will look for a bounce back in their midweek match against a team riding a rare winning streak.

Ulsan are still licking their wounds after losing to Pohang Steelers 2-0 on Saturday. That loss, combined with Jeonbuk Hyundai Motors' 2-1 victory over Gimcheon Sangmu FC the same day, cut Ulsan's lead over Jeonbuk in first place to five points.

The gap between the two clubs had been 11 points in mid June, four matches ago.

Jeonbuk broke Ulsan's heart for the title in each of the past three seasons, snatching the crown from Ulsan's grasp with late rallies. The way this season has been going must be all too familiar for both teams, with Ulsan stumbling a bit after a hot start and Jeonbuk rounding into form following a mediocre stretch early in the year.

Though Gangwon are only in ninth place, they have won back-to-back matches for the first time all season and also enjoyed their first away win Saturday against Seongnam FC.

Ulsan beat Gangwon 3-1 in their first meeting of the season on May 8.

Jeonbuk will try to keep the heat on Ulsan when they visit FC Seoul at 7:30 p.m. Wednesday.

Jeonbuk are undefeated in their past 10 meetings with Seoul, with eight wins and two draws. One of those draws came in their first matchup of the year on May 5.

On Tuesday, Pohang Steelers will visit last-place Seongnam FC, looking to further establish themselves in the top-three picture. Jeju United, which blew a 2-0 lead against FC Seoul to settle for a 2-2 draw Saturday, will take on Gimcheon Sangmu FC, winless in their past nine.

Suwon FC had their three-game winning streak snapped Sunday in a scoreless draw against Daegu FC.

Suwon Samsung Bluewings also had a 0-0 draw with Incheon United on Sunday, ending their three-game losing streak but remaining winless in their past six.

This was Incheon's first match without striker Stefan Mugosa, the K League 1's leading scorer who agreed to a deal with Vissel Kobe in Japan last week. (Yonhap)