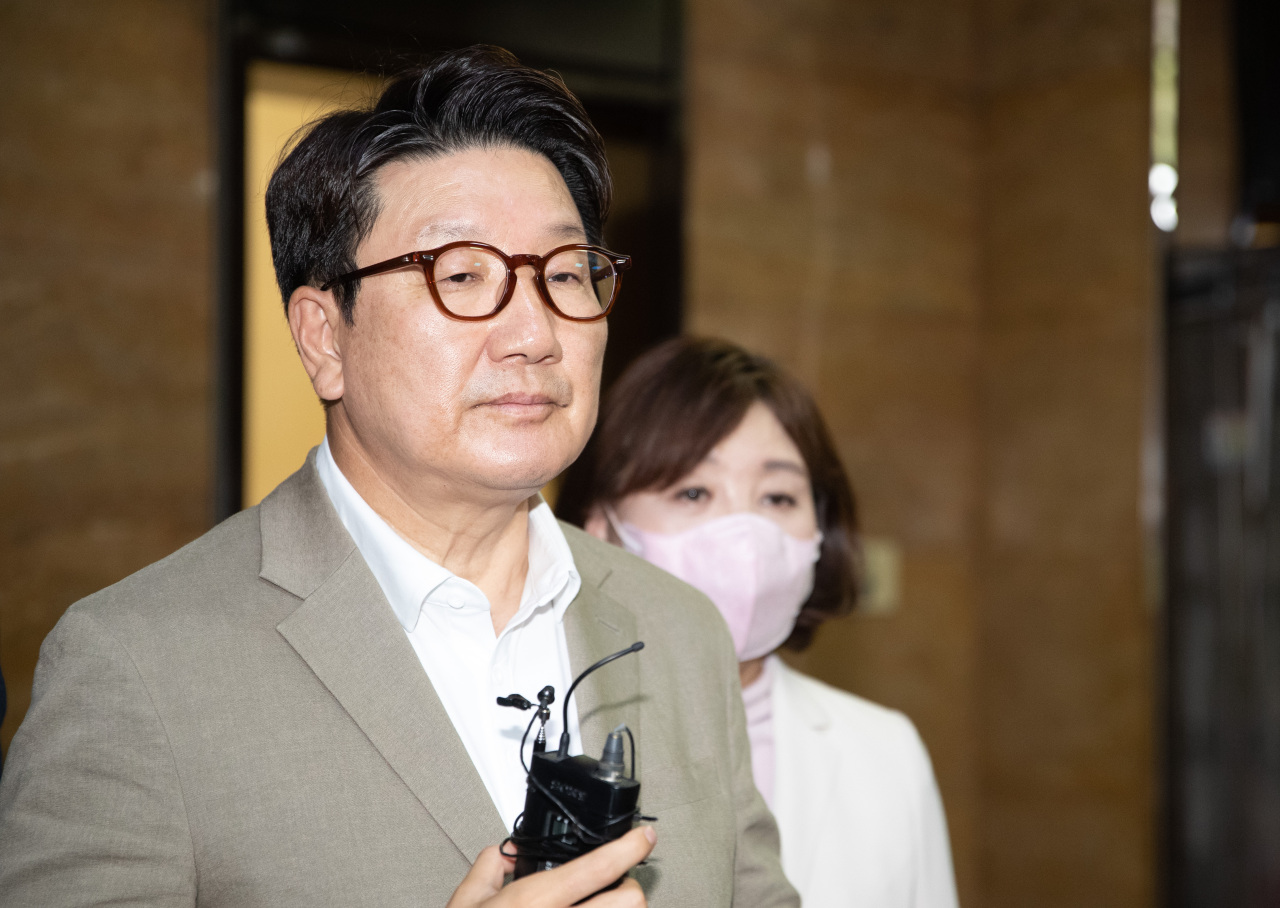 Rep. Kweon Seong-dong, floor leader of the ruling People Power Party, answers questions from reporters at the National Assembly on Sunday. (Joint Press Corps)
South Korea’s rival parties failed to strike a deal in their last-minute negotiations for forming the next leadership of the legislative branch before the start of this month’s provisional assembly.

As the closed-door meeting held Sunday afternoon between floor leaders of the ruling and main opposition parties ended without an agreement, the National Assembly is to remain stalled, further delaying confirmation hearings for President Yoon Suk-yeol’s Cabinet picks and more than 11,000 bills.

Rep. Kweon Seong-dong, floor leader of the ruling People Power Party, and his counterpart Rep. Park Hong-keun of the Democratic Party of Korea, met in Seoul for a two-hour meeting. However, Kweon told reporters at the National Assembly that they fell short of reaching a deal.

“I met floor leader Park Hong-keun for about two hours from 3 p.m., and we candidly shared the opinions of both parties,” Kweon told reporters after the meeting.

“But we failed to reach a compromise that would start the formation of a new legislative leadership. We parted ways after talking about resuming negotiations moving forward.”

The meeting was announced Saturday upon Kweon’s arrival from the Philippines, as he said he will hold a closed meeting with Park to narrow down their differences on which party would take key legislative committee chair posts. He said the meeting was held behind closed doors upon the Democratic Party’s request.

The Democratic Party offered earlier to let the People Power Party take the Legislation and Judiciary Committee chair seat, upholding the bipartisan compromise made in July last year. However, the Democratic Party instead asked the ruling party to agree to take part in the special committee on prosecution reform in exchange for the chair seat.

The People Power Party insisted the seat should come without any conditions, adding it cannot join the special committee. Any moves limiting the authority of the prosecution cannot be agreed upon, Kweon and other People Power Party legislators have argued.

As no progress was seen in the negotiations, the Democratic Party submitted a request last Tuesday with the National Assembly to open a provisional assembly in July, betting on its sheer numerical dominance in the legislative branch.

The party at the moment controls 170 out of 300 legislative seats at the National Assembly. It was contemplating forcing open a plenary session Monday to unilaterally elect a new National Assembly speaker, having chosen Rep. Kim Jin-pyo of its party through an internal vote in May.

Regulations state that a plenary session, if it opens, has to start by having the most senior legislator moderate an election procedure session for a new National Assembly speaker. The new speaker can be elected in a session where at least 150 legislators are present.

“We are continuing to negotiate on that,” Kweon said, referring to the Democratic Party’s push to unilaterally elect a new National Assembly speaker.

“It would be great if we can reach a compromise, but if we can’t strike one, we will then officially announce our party’s stance,” he said.

The Democratic Party said in a statement to reporters after the meeting that the party and its legislators will continue to take part in negotiations before the scheduled plenary session Monday.