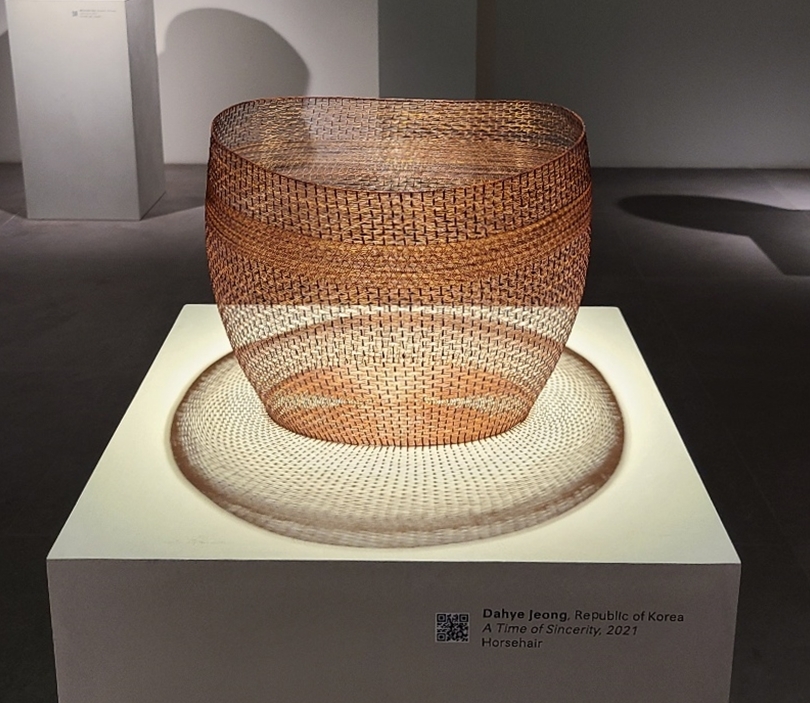 ”A Time of Sincerity“ by Jeong Da-hye (Yonhap)
Jeong Da-hye became the first South Korean artist to win the Loewe Foundation Craft Prize, for “A Time of Sincerity,” a basket created from woven horsehair. The awards ceremony was held at the Seoul Museum of Craft Art in Jongno, central Seoul, on Thursday.

Made using a 500-year-old Korean hat-making technique that had long been considered a lost art, Jeong’s piece won the prize in a unanimous decision by the panel of judges.

“‘A Time of Sincerity’ exuded auras of human suffering with its intensive weaves. With the usage of such complex technique, it was, also, able to connote simplicity,” said Anatxu Zabalbeascoa, a panelist of the Loewe Foundation awards, who also expressed surprise that the shape of the work could be retained with such light material as the main component.

The jury, on top of noting Jeong’s dedication to updating the tradition, praised the delicate perfection, transparency and lightness of the work, according to the Loewe Foundation.

The Loewe Foundation Craft Prize, marking its fifth edition this year, is an international awards ceremony established by the Spanish high-end fashion brand Loewe in 2016 to honor the excellence, artistry and originality of modern crafts.

This year’s competition drew the greatest number of South Korean artists so far.

“The fact that such an event was held in South Korea means that Korean craftsmanship is being internationally recognized,” said Cho Hye-young, Loewe Foundation Craft Prize commissioner.