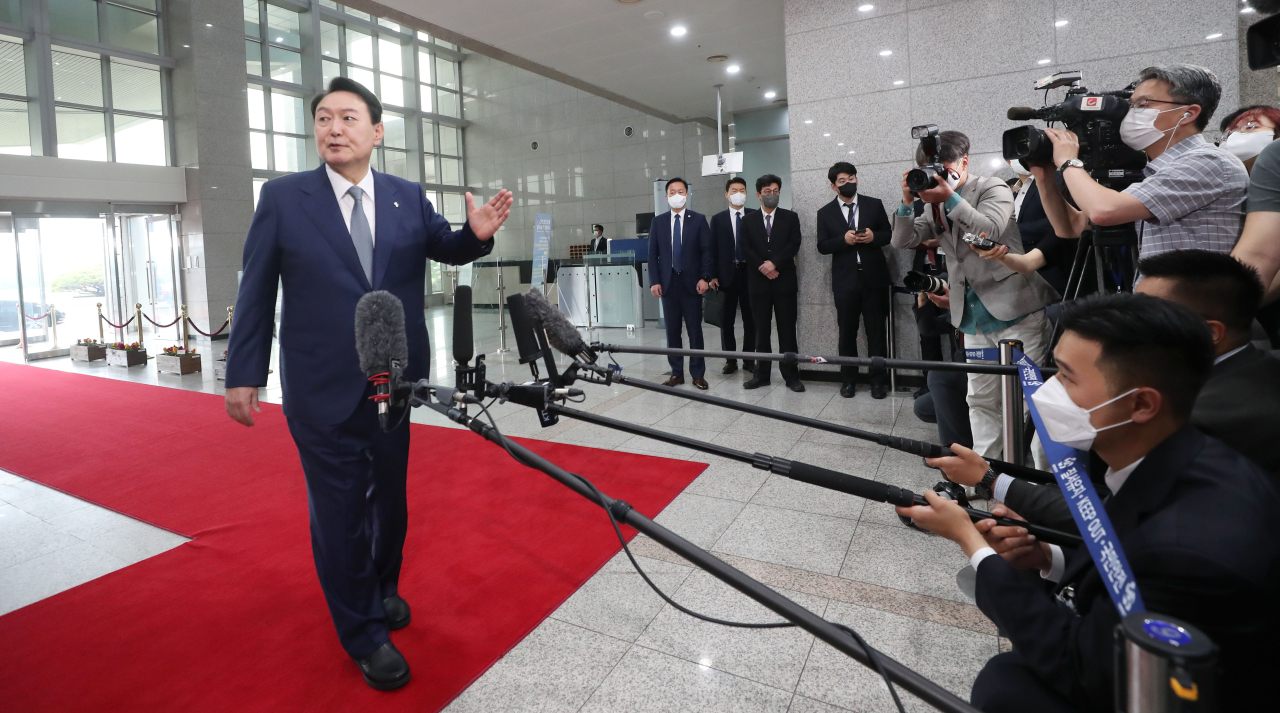 President Yoon Suk-yeol take questions from the press on Friday. (Yonhap)
A four-day workweek is a hot topic now globally, with thousands of workers in the UK partaking in the largest experiment to date of a shortened work schedule.

In South Korea, a law that caps weekly working hours at 52 is facing scrutiny for the opposite reason.

President Yoon Suk-yeol and his office has said, however, that the plan has yet to be confirmed, but acknowledged that reforming work rules is part of the Yoon administration’s agenda.

The 52-hour workweek was first introduced in 2018 under the previous Moon Jae-in administration in an effort to ensure “a life with breaks.” Before the amendment to the Labor Standards Act was introduced, workers were legally allowed to clock in up to 68 hours a week.

While many workers work 40 hours a week, the law mandates that overtime work cannot exceed 12 hours a week, capping the total hours at 52.

In July last year, workplaces with as few as five employees became subject to this rule.

The move was hailed as a step in the right direction by some. However, it also faced criticism -- chiefly from employers -- for stifling flexibility in workplaces.

In a recent statement, the Korea Enterprises Federation welcomed the Labor Ministry’s plans to revise the current policy on working hours and wages and said the move would “help create jobs” and “solve the economic crisis.”

The Federation of Middle Market Enterprises of Korea has also said that managing overtime work hours on a monthly basis would “help solve the issues faced by companies and workers.”

President Yoon has been a critic of the 52-hour workweek for some time.

His argument was that some jobs require more flexibility, such as video game developers who have to work longer hours on certain weeks to meet a deadline.

In 2021, he said that some business owners have told him that the minimum wage and the 52-hour workweek are “unrealistic.” Yoon faced criticism when he suggested that workers should be allowed to work 120 hours in one week and then rest, citing a conversation he had with workers in the startup industry.

One of the longest working hours in the world

Gapjil119, an incorporated association representing workers, warned that in theory, the ministry’s plans would make it possible for employers to work their staff for up to 92 hours for one week out of every month.

“If you work 40 hours between Friday, Saturday and Sunday and then work 52 hours between Monday to Thursday, it would still be technically not a breach of the 52-hour rule (as envisioned by the ministry).”

The group claimed that there are still many workers in Korea who suffer from long hours without proper compensation.

“One whistleblower has only received 10,000 won for doing a night shift and another 10,000 won for a taxi ride, despite working 16 hours a day and a total of 90 hours including the weekend,” the association said.

“Working long hours at night can make workers sick and leads to death from overwork,” it added.

In a Facebook post last week, former Democratic Party of Korea co-interim leader Park Ji-hyun slammed President Yoon as “anti-labor” and accused him of “turning back the clock to the 1970s.”