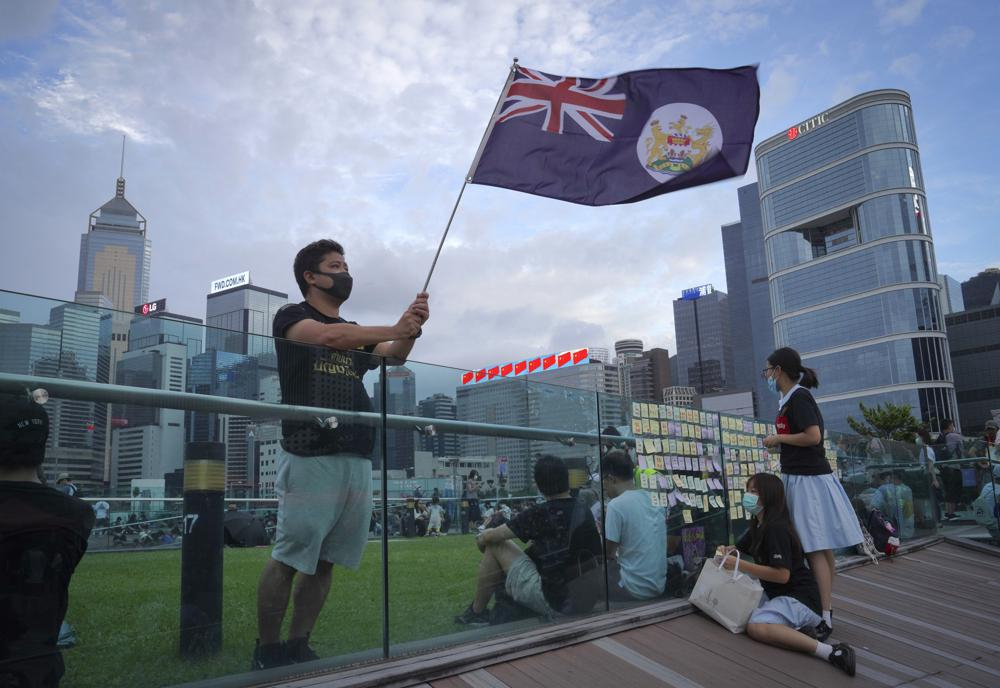 A protester waves Hong Kong British colony flag during continuing pro-democracy rallies in Tamar Park, Hong Kong, on Sept. 3, 2019. When the British handed its colony Hong Kong to Beijing in 1997, it was promised 50 years of self-government and freedoms of assembly, speech and press that are not allowed Chinese on the Communist-ruled mainland. As the city of 7.4 million people marks 25 years under Beijing's rule on Friday, those promises are wearing thin. Hong Kong's honeymoon period, when it carried on much as it always had, has passed, and its future remains uncertain, determined by forces beyond its control. (AP Photo/Vincent Yu, File)

HONG KONG (AP) -- When the British handed Hong Kong to Beijing in 1997, it was promised 50 years of self-government and freedoms of assembly, speech and press that are not allowed on the Communist-ruled Chinese mainland.

As the city of 7.4 million people marks 25 years under Beijing's rule on Friday, those promises are wearing thin. Hong Kong's honeymoon period, when it carried on much as it always had, has passed, and its future remains uncertain, determined by forces beyond its control.

Before the handover, many in Hong Kong worried that life would change when Beijing took over. Thousands rushed to obtain residency elsewhere and some moved abroad. For the first decade or so, such measures looked overly dramatic -- this bustling bastion of capitalism on China's southern coast appeared to keep its freedoms, and the economy was booming.

In recent years, Beijing has been expanding its influence and control. Those moves appeared to be hastened by mass pro-democracy protests in 2014 and 2019. Now, schools must provide lessons on patriotism and national security, and some new textbooks deny Hong Kong was ever a British colony.

Electoral reforms have ensured that no opposition lawmakers, only those deemed to be "patriots" by Beijing, are in the city's legislature, muting once lively debates over how to run the city. China has installed John Lee, a career security official, as the successor to Chief Executive Carrie Lam.

Freedom of the press has come under attack and pro-democracy newspapers openly critical of the government, such as Apple Daily, have been forced to close. Its publisher Jimmy Lai has been jailed.

Hong Kong also has banned annual protests marking China's June 4, 1989, crackdown on the pro-democracy movement centered on Beijing's Tiananmen Square, with authorities citing pandemic precautions. The city's tourism and businesses are reeling from its adherence to stringent COVID-zero policies enforced on the mainland.

Alex Siu, a building services engineer, was born in Hong Kong and only left in 2020 -- his parents had ensured he'd have the option by getting him a British National Overseas passport years earlier.

Siu moved to Manchester, England, with his girlfriend after getting fed up both with Hong Kong's work environment and the political situation. He's homesick for the food, friends and family, but isn't planning to go back.

"I believe there is no hope because the government holds absolute power," Siu said of the deteriorating political freedoms in Hong Kong. "Us little citizens, we don't have much power to oppose them or change the situation."

Kurt Tong, former US consul general to Hong Kong and managing partner of consultancy The Asia Group, said the changes reflect growing dissatisfaction in Beijing with the freewheeling semi-autonomous region. The consternation deepened when some of the millions of Hong Kong residents who marched in peaceful pro-democracy protests in 2019 stormed the city's legislative complex and at times violently clashed with police.

Beginning in 2020, the authorities launched a crackdown on political dissent, arresting dozens of activists and imprisoning them for unauthorized assembly, despite provisions guaranteeing freedom for such gatherings under Hong Kong's Basic Law, the city's constitution.

John Burns, an honorary professor of politics and public administration at the University of Hong Kong, was skeptical that Beijing would ever allow Hong Kong full democracy or universal suffrage, goals enshrined in the Basic Law at the time of the 1997 handover.

"Hong Kong was going to become part of a local government of an authoritarian country ruled by a Leninist party. How could it be a Western-style parliamentary democracy?" Burns said in an interview.

The authorities cracked down and moved to stamp out dissent to help restore stability after the months long 2019 protests, he noted.

"But this is a brittle stability based on the imposition of the law and the arrest of pan-democratic leaders and jailing them, chasing them out," he said, and many in Hong Kong still support the pro-democracy movement even if they are silent for now.

"We're in a kind of hellish place. Hong Kong is not part of the system and therefore it can't bargain that way, (but at the same time) we are not free. We are in this hybrid middle ground," Burns added. "The party has never had to rule a place like Hong Kong, so it's learning to as it goes."

Former Democratic Party chairwoman and ex-lawmaker Emily Lau says she is disappointed with the changes but not surprised. "When you deal with a communist regime, you shouldn't be expecting anything. Nothing should surprise you," Lau said.

She's focused on Hong Kong's future. The city remains distinct from the mainland, she said. Her friends and colleagues may be imprisoned, but she can visit them and they can choose their own lawyers -- rights usually denied political prisoners in China.

"I know it's very difficult. But I think we owe it to ourselves and to future generations to do the best we can to fight for our core values, which are human rights, democracy, rule of law and personal safety, and social justice," she said.

Chan Po-ying, 66, whose longtime partner and fellow pro-democracy activist Leung Kwok-hung -- better known by his nickname "Long Hair," is serving a nearly 2-year prison sentence and awaiting a hearing on national security related charges, says she is pressing on.

"I have persevered for a long period of time, I believe that I should not give up so easily, especially during this difficult time," Chan said "The government and the law have granted these rights to us (under the Basic Law)."

In May, during an election for Hong Kong's new chief executive, Chan and several others held a small protest to demand universal. (AP)