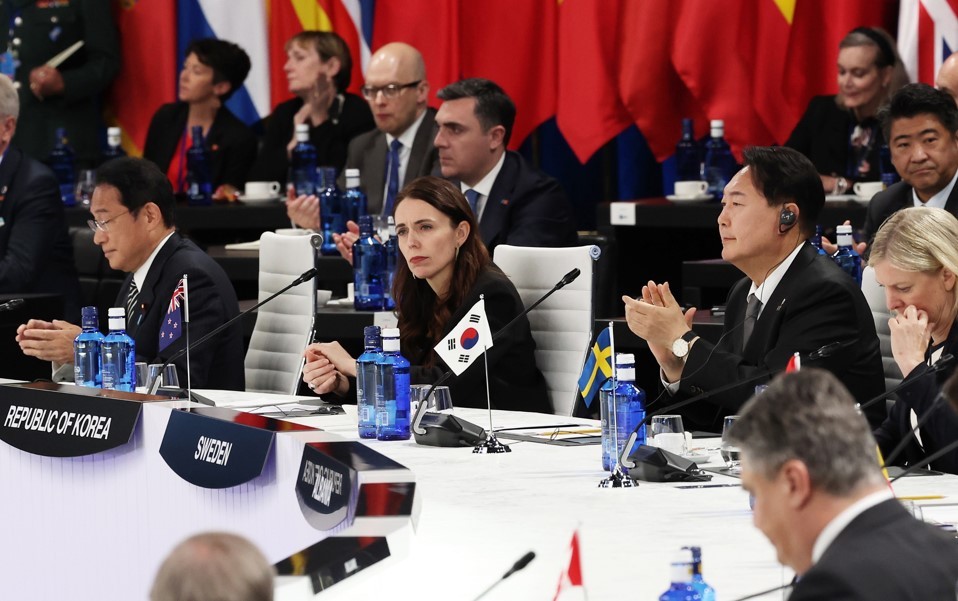 President Yoon Suk-yeol attends the meeting of the North Atlantic Council at the level of heads of state and government with partners at the NATO summit on Wednesday in Madrid, Spain. (Yonhap)

MADRID -- President Yoon Suk-yeol called on the international community to strengthen its determination to denuclearize North in a three-minute speech at the NATO summit Wednesday.

It was the first time a South Korean president has spoken on the NATO stage. Yoon was the seventh to take the podium at the meeting of heads of state and government, following British Prime Minister Boris Johnson.

"North Korea’s nuclear and missile program clearly violates UN Security Council resolutions,” Yoon was quoted as saying by his office, calling it “a major challenge to peace and security on the Korean Peninsula and the international community.”

“To bring North Korea on the path of denuclearization, it must clearly show that the international community’s willingness to denuclearize is stronger than its reckless will to develop nuclear and missile programs.”

He also alluded to a new strategy concept adopted at the summit that describes the security environment facing the alliance, reaffirms its values and spells out NATO’s key purpose of collective defense. It further sets out NATO’s three core tasks of deterrence and defense; crisis prevention and management; and cooperative security.

"Today, the international community faces a complex security threat that a single nation cannot solve," Yoon said. “NATO’s interest in the Indo-Pacific region, which reflects the new strategic concept, also illustrates this awareness of the problem.”

Since establishing a global partnership in 2006, Korea and NATO have developed security cooperation in political and military fields, and now Korea will play a greater role and bear greater responsibility as a competent country, he said.

"We look forward to close cooperation with NATO allies," he said, referring to economic and cybersecurity issues.