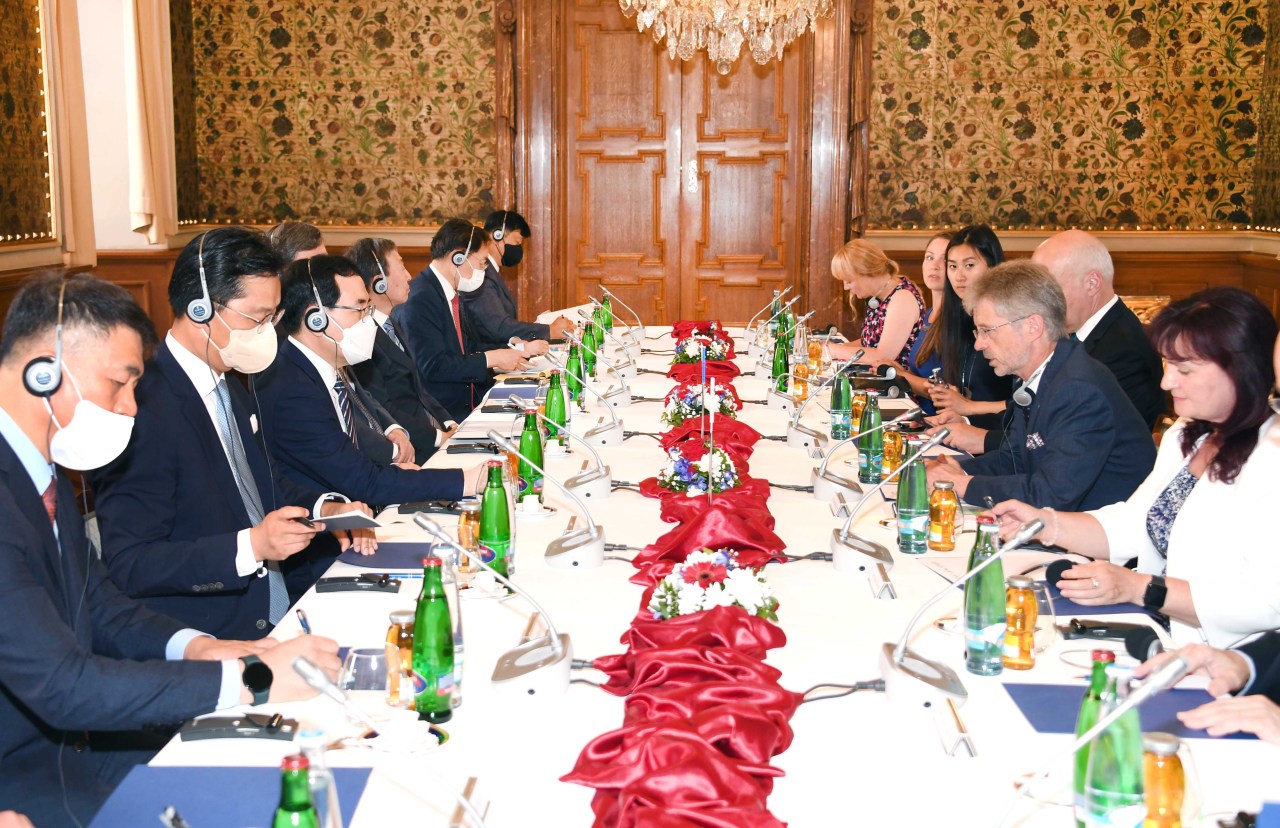 Korea’s Energy Minister Lee Chang-yang (third from left) holds talks with Czech’s Senate President Milos Vystrcil (second from right) on bilateral ties in Prague on Tuesday. (Yonhap)
SEJONG -- South Korea has recently carried out a senior-level promotion in the Czech Republic for its nuclear energy technologies in an attempt to win a reactor project in the European nation, the Energy Ministry said Wednesday.

The core of promotion activities was Minister of Trade, Industry and Energy Lee Chang-yang’s meetings with Czech senior officials and political heavyweights in Prague on Tuesday.

In a meeting with his counterpart Jozef Sikela, Lee commented on details on Korea’s advanced nuclear energy technologies and management capability.

Lee, in particular, stressed in front of participants that Korea’s technologies have already been acknowledged in the global stage through its Barakah project in the United Arab Emirates. Korea has successfully constructed four nuclear reactors in Barakah, UAE.

The Czech Republic has the goal of building a reactor with power generation capacity up to 1,200 megawatts in Dukovany in the country’s southeast. The nation, which started a bidding process in March, is scheduled to receive bids in November from several contenders.

Minister Jozef Sikela stressed the significance of nuclear energy in its government’s energy policy, comparing to that of the new administration in Korea, said the Energy Ministry of Korea.

The counterpart also mentioned the importance of coordination among “like-minded” countries in terms of freedom and democracy, said the ministry.

On the same day, Lee met with Czech’s Senate President Milos Vystrcil, who called for Korean officials’ attention to the potential establishment of a direct flight route between the two nations and Korea’s continuous support for Ukraine.

This visit holds a meaning in the aspects of restoring the nuclear energy industry under the Yoon Suk-yeol administration, and reseeking creation of national wealth via overseas bids.

President Yoon is scheduled to hold a summit with Czech Prime Minister Petr Fiala in Madrid on Thursday where the project will likely be mentioned, on the sidelines of the NATO summit.

The Czech Republic is one of the 30 NATO members.