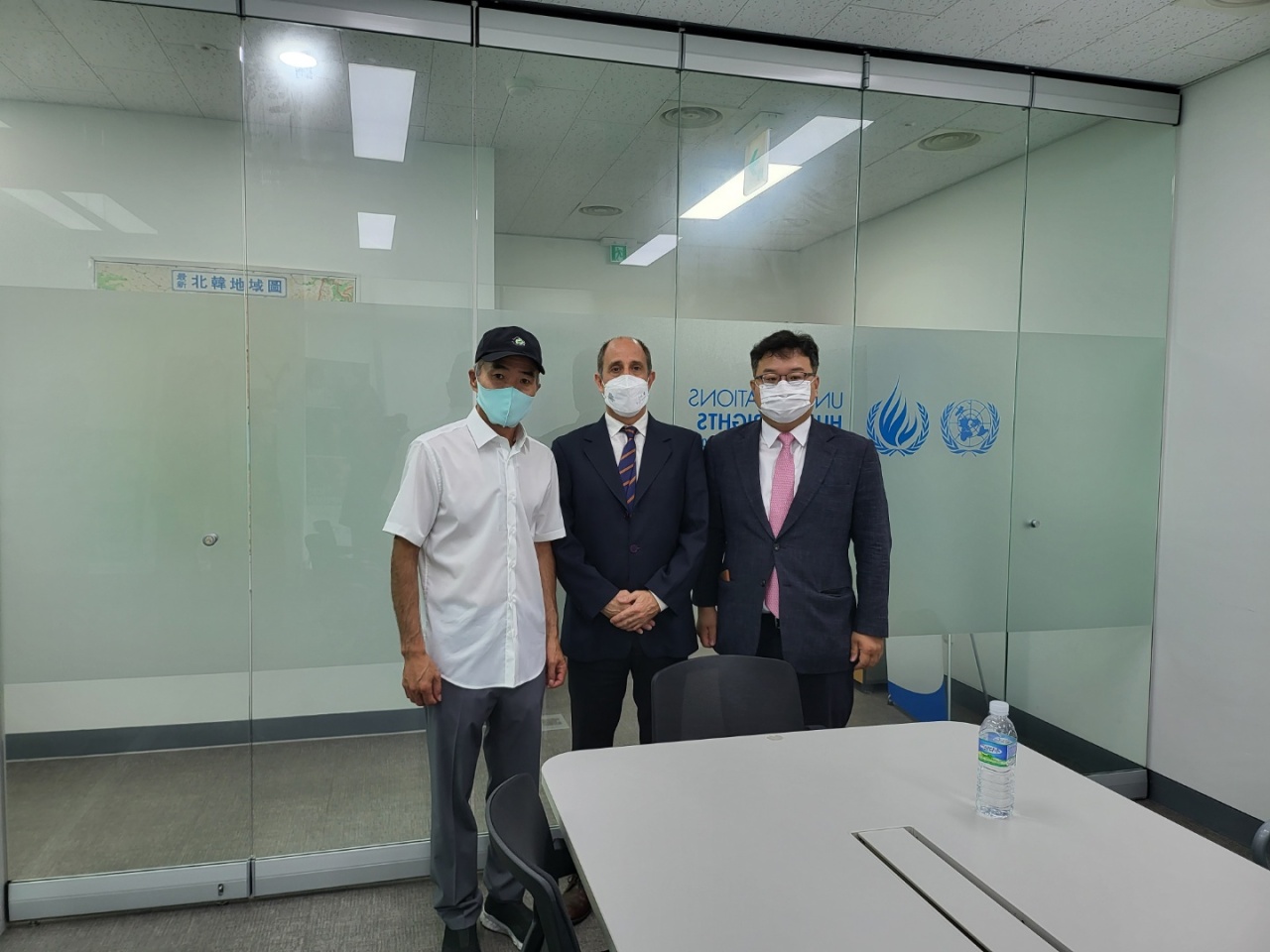 UN special rapporteur Tomas Ojea Quintana met with Lee Dae-jun’s family on Tuesday morning at the UN human rights office in Seoul. (courtesy of Lee)
The family of Lee Dae-jun, a South Korean fisheries official who was killed by North Korean troops at sea in 2020, and their lawyer said Tuesday they plan on reaching out to a United Nations expert on extrajudicial killings for help.

The official’s older brother, Lee Rae-jin, and his lawyer Kim Ki-yun met with Tomas Ojea Quintana, the UN special rapporteur on the human rights situation in North Korea, on Tuesday morning to discuss challenges facing the family’s pursuit of accountability and justice.

Kim said Ojea Quintana suggested the family seek international help in getting to the truth. “For instance he said the family could submit a letter to a UN expert on extrajudicial, summary or arbitrary executions, as one way of soliciting help from outside South Korea,” he said.

Despite winning a court case against Cheong Wa Dae, the information related to Lee’s killing remains classified as a part of former President Moon Jae-in’s archives for at least 15 years.

With approval from two-thirds of the National Assembly the presidential records could be opened, but the likelihood of that is low. The main opposition Democratic Party of Korea’s leadership has rejected calls to play a part in the disclosure.

Kim said Ojea Quintana was “incredibly supportive of the family and the ongoing struggles to unearth the facts” during what might be his last meeting with the family. This is his last official visit to South Korea as the special rapporteur on North Korea’s human rights situation.

“The special rapporteur said the bereaved family has the right to the truth about what happened. He said what North Korea had done to the South Korean official was a serious violation of human rights,” Kim added.

The official’s older brother, Lee Rae-jin, told The Korea Herald that the family would be following Ojea Quintana’s suggestion to approach another UN expert.

The letter to the UN special rapporteur on extrajudicial killings, which the family has yet to draft, would mainly entail “seeking accountability from North Korea” and “calls for allowing access to information owned by our last president,” he said.

Involvement from the UN working group on extrajudicial executions would highlight “serious violations of rights, especially the right to life” in Lee’s case in particular, according to Shin Hee-seok, a Transitional Justice Working Group legal analyst.

“I think this would be an opportunity to shed a different light on the ongoing situation, with regards to the barring of access to information and so on,” Shin, who helped arrange the Lee family’s first meeting with the UN human rights office in Seoul, told The Korea Herald.