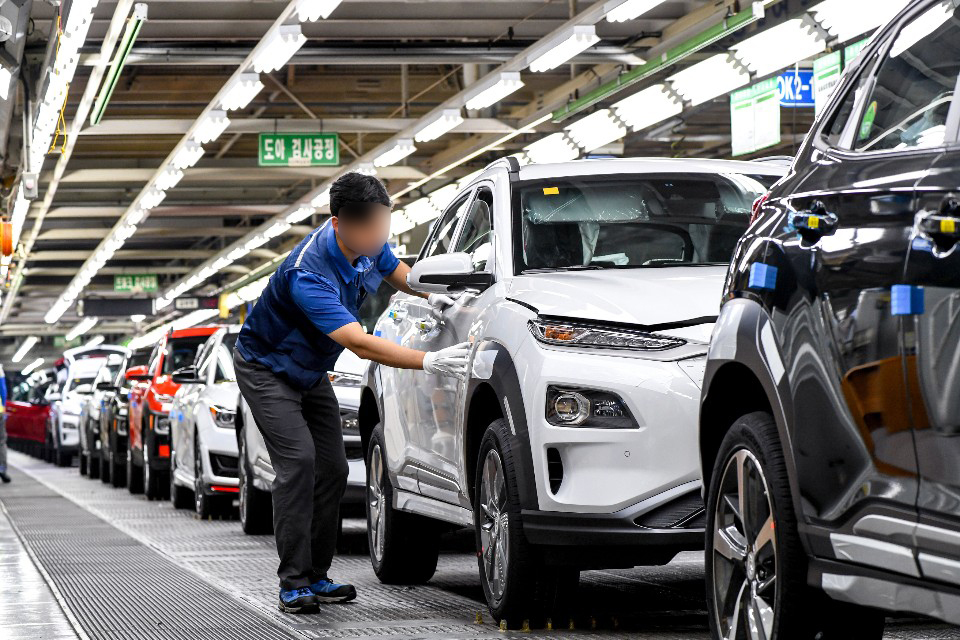 An employee works at Hyundai Motor Group’s Ulsan plant. (Hyundai Motor Co. branch of the Korean Metal Workers’ Union)
A labor dispute is brewing at Hyundai Motor Group, as its unionized workers warned of a possible strike after they failed to narrow differences with management over wage hikes and working conditions amid the automaker’s shifting focus toward electric vehicles, a threat to its manufacturing-focused workforce.

According to the industry on Sunday, the labor union with some 47,000 members at the Hyundai Motor Co. branch of the Korean Metal Workers’ Union under the Korean Confederation of Trade Union will vote Friday to decide whether to go on strike. They have held 12 rounds of negotiations for this year’s collective bargaining agreement since May.

Market insiders are eyeing a possible strike at the country’s largest automaker, which would be the first in four years, after its hard-line union leader returned to the bargaining table after being newly picked as leader of the union in December last year.

The main sticking point in the management-labor dispute is on the prospect of less assembly work and unstable job security in the changing business environment as the automaker has been making aggressive moves on future mobility, like electric vehicles, to join the global trend. The unionized workers are demanding the automaker invest in domestic manufacturing facilities for future EV production.

Hyundai Motor Group is planning to stop sales of combustion-engine cars in major markets like Korea, the US, China and Europe from 2040, and completely stop manufacturing them from 2045.

As part of the strategy, the Korean carmaker announced in May it would invest 21 trillion won ($16 billion) domestically to quadruple its EV production capacity here by 2030. The automaker said the investment will be implemented over the next three years, working with its subsidiaries Kia and Hyundai Mobis to turn Korea into a hub for its future mobility business.

The company is also adopting a new production system, moving away from mass production of a small batch of models toward smaller production of various models at its Ulsan plant. As EVs require less human involvement for production, not only because robots can replace them, but also because auto parts of EVs are fewer in number and can be modularized, the labor union is demanding the company guarantee their roles as production workers.

According to the company, more than 50 percent of its workforce are concentrated in production and maintenance, while just around 16 percent are in the R&D sector.

In the face of the electric transition, a retirement age extension is another point laborers argue for job stability.

According to the union, 12,600, or one-fourth, of the unionized workers are expected to retire between 2022 and 2026. Some 3,000 senior workers on the manufacturing line have continued to go home each year and it is the company’s responsibility to guarantee the laborers’ employment, they say.

In 2017, the retirement age for South Korean conglomerates increased to 60 years old with an update to the related law. Hyundai Motor Group has also extended its retirement age from 57 years old, with an introduction of the peak wage system that offers gradual cuts in salary for senior workers several years before retirement.

But the vote result does not mean an immediate strike. A legal strike is possible only after the National Labor Relations Commission decides to discontinue arbitration, citing a huge gap between the labor union and management’s stances. Hyundai Motor Co.’s labor union reached settlements in 2019 and 2020 without labor disputes.