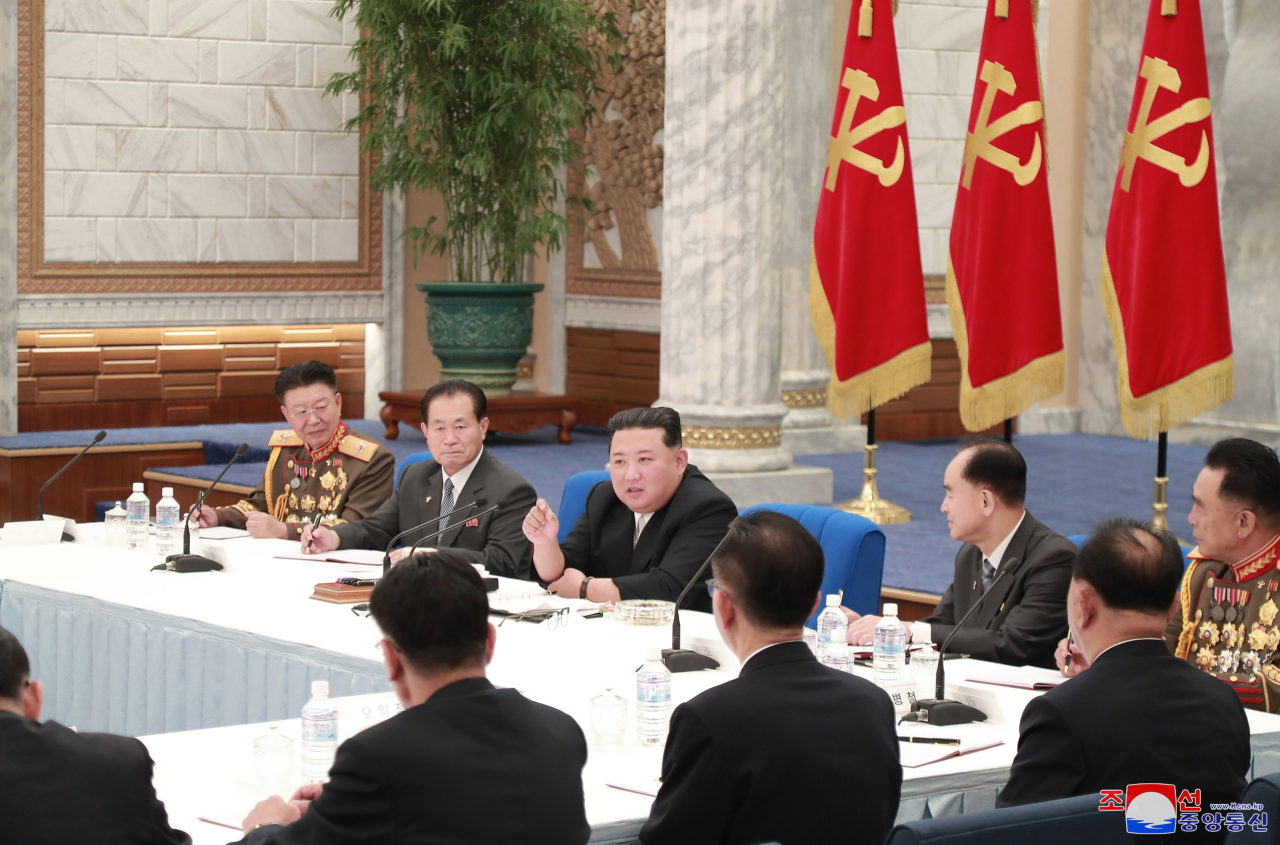 North Korean leader Kim Jong-un (center) speaks during a meeting of the Central Military Commission of the Workers‘ Party of Korea on Tuesday in this photo provided by the state-run Korean Central News Agency. (Yonhap)
North Korean leader Kim Jong-un convened the first meeting of the Central Military Commission in one year to discuss and decide on “crucial and urgent tasks” to bolster its military, the state media reported Wednesday.

The third enlarged meeting of the eighth Central Military Commission of the Workers’ Party of Korea kicked off Tuesday, the state-run Korean Central News Agency said. The first and second meetings were held respectively in February and June 2021.

Members of the CMC, which is chaired by the North Korean leader, will make an overall assessment of the country’s work and achievements in developing national defense capabilities in the first half of the year, the KCNA reported in a Korean-language report.

The meeting will also discuss ways to “thoroughly implement the party’s military line and key defense policies and decide on the crucial and urgent tasks to build up national defense (capabilities).”

In addition, CMC members will determine the “important strategic and tactical tasks to be fulfilled by the Korean People’s Army.”

The state media said the meeting will analyze and review the order and actual condition of the CMC and other submilitary commissions under the provincial, city and county party committees as well as their systems of implementing military-related tasks.

Participating military officials will also “discuss major tasks to further enhance the function and role of the military commissions at all levels” during the CMC meeting, which comes just two weeks after a major military reshuffle was announced at the latest party plenum.

The military and political activity of the North’s Ministry of National Defense, the General Staff of the KPA, the party’s KPA Committee as well as commanding officials, staff sections and political departments of the KPA units at all levels and the party organizations under the armed forces organs will be examined.

Multiday meeting for first time
The North Korean state media also reported that the CMC started the discussion of the proposed agenda topics, suggesting the meeting would continue for at least two days.

The meeting comes at a critical juncture when South Korea and the United States have said North Korea could conduct a nuclear test at any time in Tunnel No. 3 at the Punggye-ri nuclear testing site. Recent commercial satellite images indicate that North Korea might seek to reenable Tunnel No. 4, which is another unused underground tunnel, for potential nuclear testing.

Cheong Seong-chang, director of the Center for North Korean Studies at the Sejong Institute, pointed out that the Kim Jong-un regime has a track record of conducting a nuclear test in February 2013 days after holding the CMC meeting in the same month.

The CMC members could also assess the progress in developing weapons tested earlier this year and plans for deployment in light of the announcement that the meeting will review the overall work of national defense in the first half of this year, Cheong said.

Cheong also forecast that North Korea could announce its plans to launch what it claims to be reconnaissance satellites this year given that the meeting was held on the same day when South Korea successfully launched the nation’s first domestic Nuri rocket into orbit.

The North Korean leader in March said the country would launch “a large number of reconnaissance satellites” by 2025.

The North Korean leader said the current security environment and the surrounding situation have driven his country to expeditiously attain the goal of bolstering national defense capabilities.

At the party plenum, Kim also reaffirmed the party’s fighting principle of meeting challenges head on, strength for strength, and proposed the tasks that should be pushed forward by the “armed forces of the Republic and the national defense research sector.”

“(Kim’s) remark suggests that implementing the principle of power for power is not solely about developing advanced weapons or testing new-type missiles,” Choson Sinbo, a pro-North Korea newspaper produced by the Chongryon community in Tokyo, said Wednesday in an article, hinting that North Korea might conduct a nuclear test.

“If the power-for-power military (confrontation with the US) continues, it could bring about unforeseeable circumstances. The DPRK (North Korea) is preparing for full readiness under the banner of a head-on match,” Choson Sinbo said.