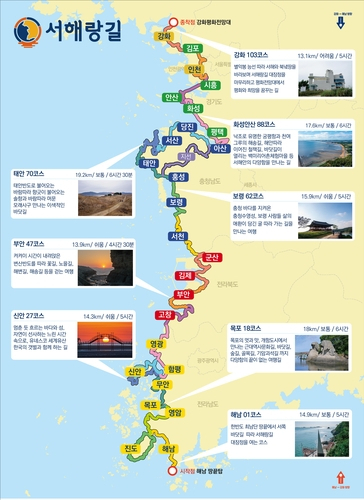 The Seohaerang Trail links an area near the Demilitarized Zone (DMZ) bisecting the two Koreas in Ganghwa of Incheon to Haenam on the southern tip of the Korean Peninsula, the Ministry of Culture, Sports and Tourism and its affiliated Korea Tourism Organization said in a release.

The trail consists of 109 courses featuring beautiful scenery, such as tidal flats, sunsets and shore pines, as well as of rural villages.

It is the third segment of the 4,500-km Korea Trail that stretches around the nation's entire coast and northern border towns after the 750-km Haeparang Trail opened along the east coast in 2016 and the 1,470-km Namparang Trail along the south coast in 2020.

The ministry has been pushing for the project since 2016 to help revitalize local economy by attracting more tourists to the areas the trail passes through. The project is set for completion next year with the opening of the fourth segment, a 524-km path along the DMZ. (Yonhap)