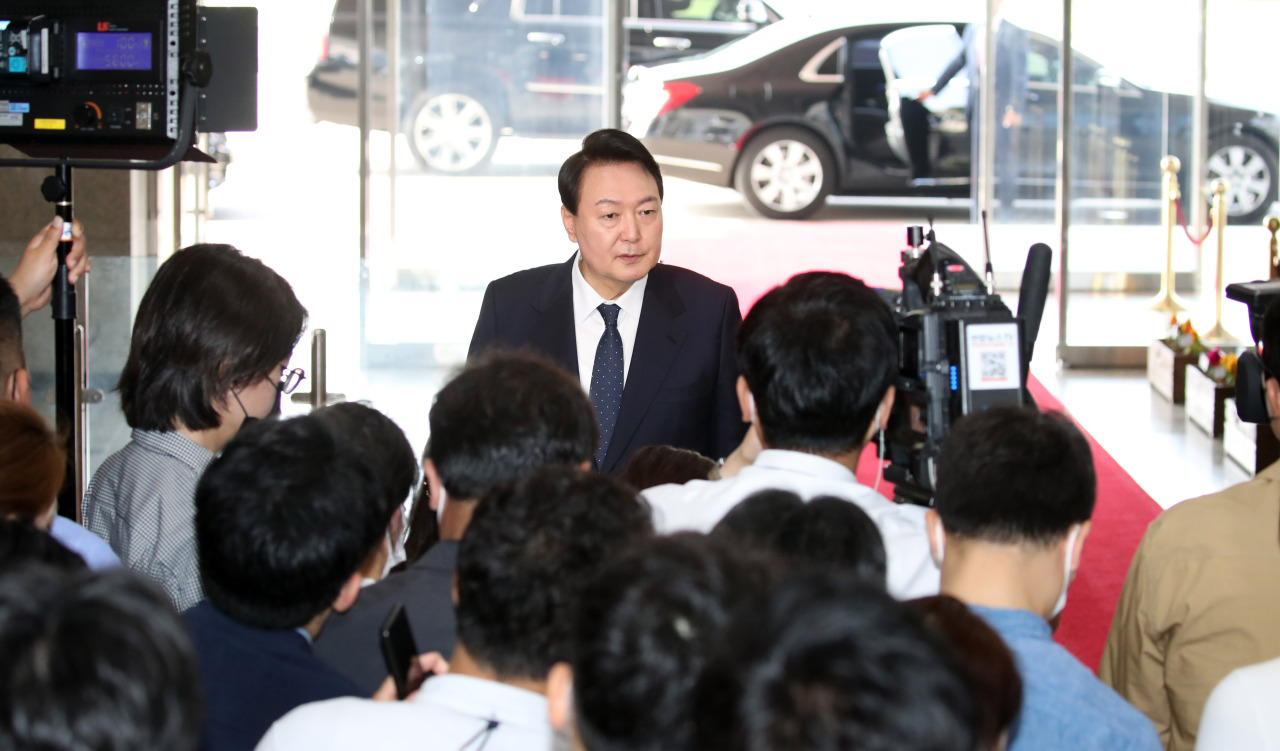 Yoon speaks to reporters at the lobby of the presidential office in Yongsan on Tuesday morning. (Yonhap)
South Korea may revisit another controversial North Korea decision made during the Moon Jae-in administration, President Yoon Suk-yeol hinted Tuesday.

Speaking to reporters, Yoon said his administration may look into the 2019 repatriation of two North Korean fishermen who sailed into South Korean waters. The two, aged 22 and 23, said they wished to defect to South Korea in handwritten statements.

In less than five days of their capture, South Korea deported both after concluding they were criminals who murdered their captain and crew to flee North Korea. They were handed over to North Korean soldiers through Panmunjom, part of the Demilitarized Zone, by special police forces while blindfolded and tied with ropes.

This marked the first time in history that South Korea rejected North Korean defectors and forcibly repatriated them. Neither of the two men knew they were being returned home, and one of them collapsed at the sight of North Korean soldiers, according to lawmakers who were briefed by officials at the time.

“The Constitution dictates that defectors are our people too. A lot of people are questioning the legitimacy of the decision to send them back to North Korea, when it’s a duty of the state to protect its people,” Yoon told reporters.

North Korean defectors, human rights activists and legal experts have since decried South Korea’s failure to provide the two fishermen with a due process of law -- access to a lawyer and a court -- and protect them in face of a highly likely execution upon repatriation.

The president’s remarks on Tuesday come amid a recent reversal of an early conclusion by South Korean maritime and military authorities that Lee Dae-jun, a fisheries official shot dead and burned by North Korean troops at sea in 2020, was an attempted defector.

“There is no evidence that the missing official intended to defect to North Korea,” said Park Sang-chun, chief of the Incheon Coast Guard, in a bombshell announcement on June 16. The Coast Guard in Incheon had investigated the case since its onset.

Also on Tuesday, Yoon said there were concerns about disclosing records marked as “special intelligence,” in response to the opposition Democratic Party of Korea’s calls on the current administration to provide evidence that Lee had not tried to defect.

The Democratic Party, which continues to stand by the accusation that the slain official sought to defect to North Korea, has refused to cooperate with requests to release information on the government’s handling of Lee’s killing, which remains archived as part of Moon’s presidential records.

Unlocking presidential records requires approval from two-thirds of the National Assembly, whose majority is controlled by the Democratic Party, or a warrant from the chief justice of a high court. But laws prevent a court warrant from being issued if doing so is deemed a potential threat to national security or diplomatic relations.

Lee’s family was expected to file a lawsuit against former Cheong Wa Dae officials on Wednesday for possible interference in the initial responses. Kim Ki-yun, a lawyer working with the family, pointed to the Defense Ministry’s June 16 release stating that the ministry had been following guidelines from Moon’s office in its responses.

As a candidate, Yoon promised Lee’s family that he would help find the truth behind the killing. Last week, the presidential office withdrew the preceding administration’s appeal of a lower court ruling granting the family access to some Cheong Wa Dae and Coast Guard records.

The ruling People Power Party launched a fact-finding task force Monday to examine the two national security incidents that took place during the Moon presidency. “We need to get to the bottom of what led to the inhumane decision that drove a South Korean citizen to death,” said floor leader Kwon Seong-dong.