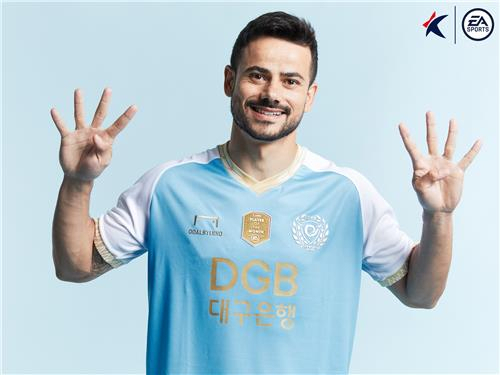 Cesinha of Daegu FC poses after being named the K League's Player of the Month for May on Thursday, in this photo provided by Daegu FC. (Daegu FC)

The Korea Professional Football League (K League) announced that Cesinha beat out three nominees for the Player of the Month prize for May.

In the six matches played in May, Cesinha recorded three goals and four assists, helping Daegu to an undefeated month with two victories and four draws.

The monthly award was introduced in March 2019, and Cesinha is now the first to win at least one Player of the Month prize in every season.

No South Korean player has yet captured the award this season. Incheon United's Montenegrin forward Stefan Mugosa had won the first two awards before ceding way to Cesinha. (Yonhap)