In 1998, when the first nationwide survey of smoking prevalence was conducted in the country, more than 35 out of every 100 Korean adults were smokers. Now, it is just about 19.

A closer look at the data, however, reveals some disturbing trends: e-cigarettes and unconventional tobacco products are gaining a strong foothold here, on top of growing tobacco use among youth and women.

The country’s latest anti-smoking campaign, unveiled on May 31, shows where the battle line is being drawn in its tobacco control policy. The campaign’s catchphrase states there is “no such thing as safer cigarettes.”

The problem is that the authorities and regulations are straggling behind the evolving alternative tobacco industry. In fact, some new products are not even classified as tobacco products by local law, meaning they are not subject to strict tobacco-related rules and regulations. 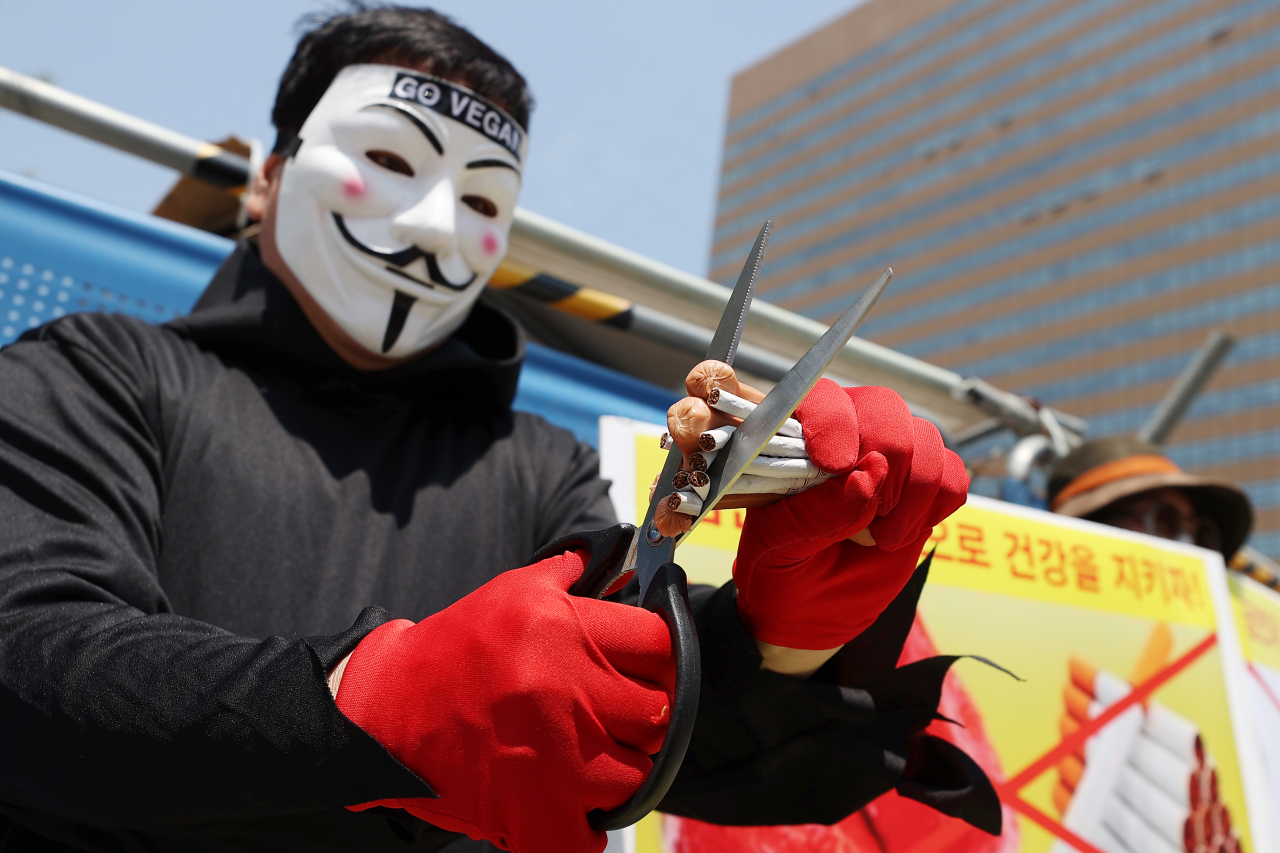 A member of the Korea Vegan Union cuts cigarettes and sausages as part of a demonstration urging people to quit smoking and go vegan in this May 31 file photo. (Yonhap)
Legal blind spots

When Koreans say electric cigarettes, they tend to not distinguish the different types. For Koreans, e-cigarettes refer to the actual products which produce aerosol by heating a liquid containing nicotine, as well as heated tobacco products (HTPs) which heat process tobacco leaf and allow users to inhale nicotine.

The legal status of e-cigarettes and HTPs in the country has also been ambiguous, to say the least. According to the Tobacco Business Act, some are technically not even legally classified as cigarettes.

The act defines tobacco as a product using tobacco leaves as all or any part of the raw materials for the purpose of chewing, smelling, smoking, sucking, or inhaling. The key term here is “tobacco leaves,” which means cigarettes made using other parts of the tobacco plant -- such as the stem or root -- or synthesized nicotine cannot be regulated by this act.

This is in line with the WHO Framework Convention on Tobacco Control, the international treaty ratified by 180 countries across the world, which also defines tobacco products as those made using “leaf tobacco.”

Lawmakers and activists in the country have been calling for a revision of the law to incorporate ingredients extracted from all parts of the tobacco plant, not just the tobacco leaf.

In 2019, then-lawmaker Kim Seung-hee -- currently the welfare minister nominee of President Yoon Suk-yeol -- proposed such a revision, which fell through without discussion due to the COVID-19 pandemic demanding all lawmakers’ and policy makers’ attentions. A similar law revision is currently pending at the National Assembly.

Lee Sung-kyu, the head of the Korea Center for Tobacco Control Research & Education, said it is necessary to expand the definition for both the WHO FCTC and the country’s law.

“A legal blind spot is one thing, but there is essentially no way to regulate new tobacco products from entering the Korean market,” he said.

Another issue related to regulation is one concerning material added for flavoring, which is widely used in e-cigarettes in particular.

In the US, youth vaping has been described as an epidemic, as thousands of kid-friendly flavors have fueled the popularity of e-cigarettes among young people.

The country in 2009 passed the Family Smoking Prevention and Tobacco Control Act to ban cigarettes with flavors other than menthol or tobacco, and other countries including Canada, Brazil and several nations in the European Union have imposed bans on varying levels.

South Korea currently has no regulation on flavored tobacco, and its sales have increased from 270 million packs in 2011 to 1.38 billion in 2020, while the overall sales of cigarettes fell from 4.4 billion to 3.59 billion in the same period.

The only legal restriction related to flavor additives is Article 9-3 of the National Health Promotion Act, which stipulates that any “flavoring” added to tobacco shall not be indicated via words, pictures or photographs on the product’s packaging or advertisements.

How harmful are they?

Nearly two decades since the modern concept of electronic cigarettes was first introduced by a Chinese pharmacist, a question that has lingered on everyone’s minds is how much of a health risk e-cigarettes pose compared to regular cigarettes.

In January 2018, the US’ National Academies of Science, Engineering and Medicine released a consensus report on 800 different studies and concluded that e-cigarettes both contain and emit a number of potentially toxic substances. 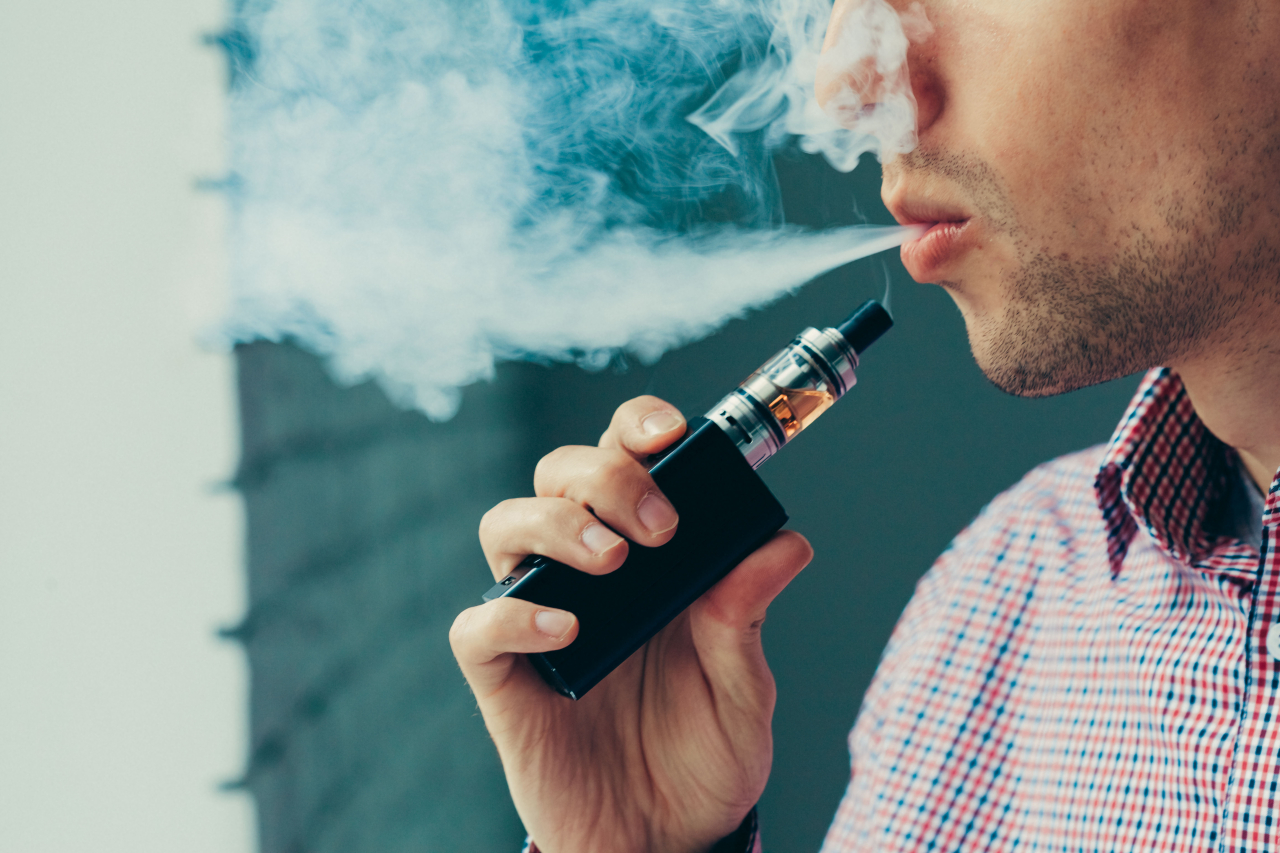 A man uses an e-cigarette. (123rf)
The study, which mostly focused on e-cigarettes using “e-liquids” -- liquefied products used in e-cigarettes containing nicotine -- and the aerosol they produce, acknowledges the biological plausibility that “long-term exposure to e-cigarette aerosols could increase risk of cancer and adverse reproductive outcomes.”

While not many would say aerosols from either e-cigarettes or HTPs are harmless, researchers are split on how harmful they can be to humans.

Philip Morris Korea, one of the leaders in the South Korean HTP market, has maintained that aerosols from its products contain significantly less harmful chemicals compared to regular cigarettes.

The US Food and Drug Administration in March authorized a reduced exposure claim for the company’s Iqos 3 system holder and charger, allowing it to market the product in the US with the following exposure information: “The Iqos system heats tobacco but does not burn it … This significantly reduces the production of harmful and potentially harmful chemicals … Scientific studies have shown that switching completely from conventional cigarettes to the Iqos system significantly reduces your body’s exposure to harmful or potentially harmful chemicals.” The FDA stresses that the authorization does not imply that the product is safe or “FDA-approved.”

But interpretations of this vary. Following Philip Morris International’s initial application in 2016, researchers from the department of clinical pharmacology at the University of California, San Francisco looked into it and found that the company reported levels for only 40 out of 93 harmful and potentially harmful constituents on the FDA’s Harmful and Potentially Harmful Constituents (HPHCs) list in the Iqos’ mainstream aerosol.

“(Philip Morris International’s) data appear to support PMI’s claim that Iqos reduces exposure to HPHCs. However, PMI’s data also show significantly higher levels of several substances that are not recognized as HPHCs by the FDA in Iqos emissions compared with combustible cigarette smoke,” the researchers concluded in the study.

In a 2020 report, Doctor Cho Hong-jun of the department of Family Medicine at Asan Medical Center pointed out that the initial reports by PMI does not disclose exact levels of hazardous substances that could be in the HTPs, and not combustible (regular) cigarettes. “This indicates that HTPs could potentially cause illnesses other than those caused by combustible cigarettes,” he wrote.

Cho went on to say that lower levels of HPHCs in e-cigarettes and HTPs as defined by the FDA cannot be directly translated into health benefits compared to regular cigarettes. This is because the relationship between exposure and effects is non-linear for cardiovascular diseases, he said. “The duration of exposure is more important than the level of exposure in determining lung cancer mortality,” he added.

“Hence, tobacco control measures should be the same for e-cigarettes, HTPs, and combustible cigarettes,” he concluded.

KT&G -- the leading tobacco company in the country which recently claimed the top spot in the HTP market -- has refrained from publicly commenting on this issue in the past. However, it recently switched its position. “HTPs are an alternative product (to cigarettes), and we (KT&G)  believe they should be subject to different regulations than those for cigarettes,” the company told The Korea Herald.

Besides the “vapors,” another possible health risk lies in the device itself.

Before the world was taken over by COVID-19, there had been an outbreak of e-cigarette or vaping use-associated lung injury, or EVALI, between mid-2019 and early-2020. Vitamin E acetate -- an additive in some THC-containing e-cigarettes -- is a strong culprit of illnesses, but other chemicals had not been ruled out.

The patients, almost exclusively Americans, were found to have been using unregulated cannabis vaping products.

Some countries like Canada regulate vaping devices under the Canada Consumer Product Safety Act, but that is not the case for South Korea. Under the current law, devices for e-cigarettes are not categorized as tobacco products, and cannot be regulated under the Tobacco Business Act.

There have been calls for a comprehensive effort on the government’s part to handle the issue of e-cigarettes and HTPs. Also, there have been calls to uncover exactly what their effects are on health and how much they should be regulated. The South Korean government had launched a pan-government taskforce on the health risks of e-cigarettes and HTPs on the coattails of the EVALI outbreak, but its activities were limited by the ensuing COVID-19 pandemic.

Since issues related to cigarettes extend across multiple sectors of society, such as public health, industry and law, the Korea Center for Tobacco Control Research & Education’s head Lee said that a pan-government effort is necessary to tackle this problem. He also stressed that raising public awareness on potential health hazards of e-cigarettes is crucial.

“Lack of awareness is a huge problem. Even many experts are unaware of this law (in the Youth Protection Act), and so many misperceptions are spread across society. It is dangerous that many people think e-cigarettes are not harmful,” Lee said.