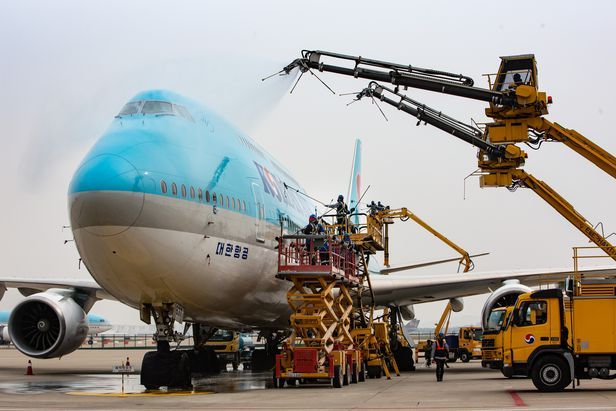 The country’s largest air carrier Korean Air will bring jumbo jets – the B747-8i and A380-800 -- back for routes connecting Incheon to Los Angeles and New York starting from July, according to Korean Air.

The decision to resume flights of large-sized aircraft comes as Korean Air tries to meet the growing demand for international travel.

The air carrier currently operates the B777-300ER, a mid-sized aircraft that can only fit up to 291 passengers for its routes to two US cities.

But with large jets, the air carrier can increase its supply of seats by at most 47 percent than when flying a B777-300ER.

Despite high-priced economy seat tickets that cost nearly 2 million won ($1,548) for a one-way trip to such locations, tickets for some time slots in July are already close to being sold out.

Korean Air and Asiana Airlines have seen remarkable increases in passengers for flights from Incheon to New York last month, with a total of 34,558 passengers -- a 338 percent increase from the 7,879 passengers they carried in May 2021.

The same goes for the number of passengers transported on flights from Incheon to Los Angeles last month, with a total of 55,389 travelers in May -- a 316 percent increase from last year.

As the industry is slowly recovering, airlines are also set to end their “no-landing” flights that came as a breakthrough for plunging travel demands amid the COVID-19 pandemic.

According to the Ministry of Land, Infrastructure and Transport, no domestic air carriers have applied for no-landing international flights for next month. The ministry will also no longer accept requests for permission to such flights.

Air Premia’s no-landing flight from Incheon to Japan and back on June 27 is expected to be the last of its kind.