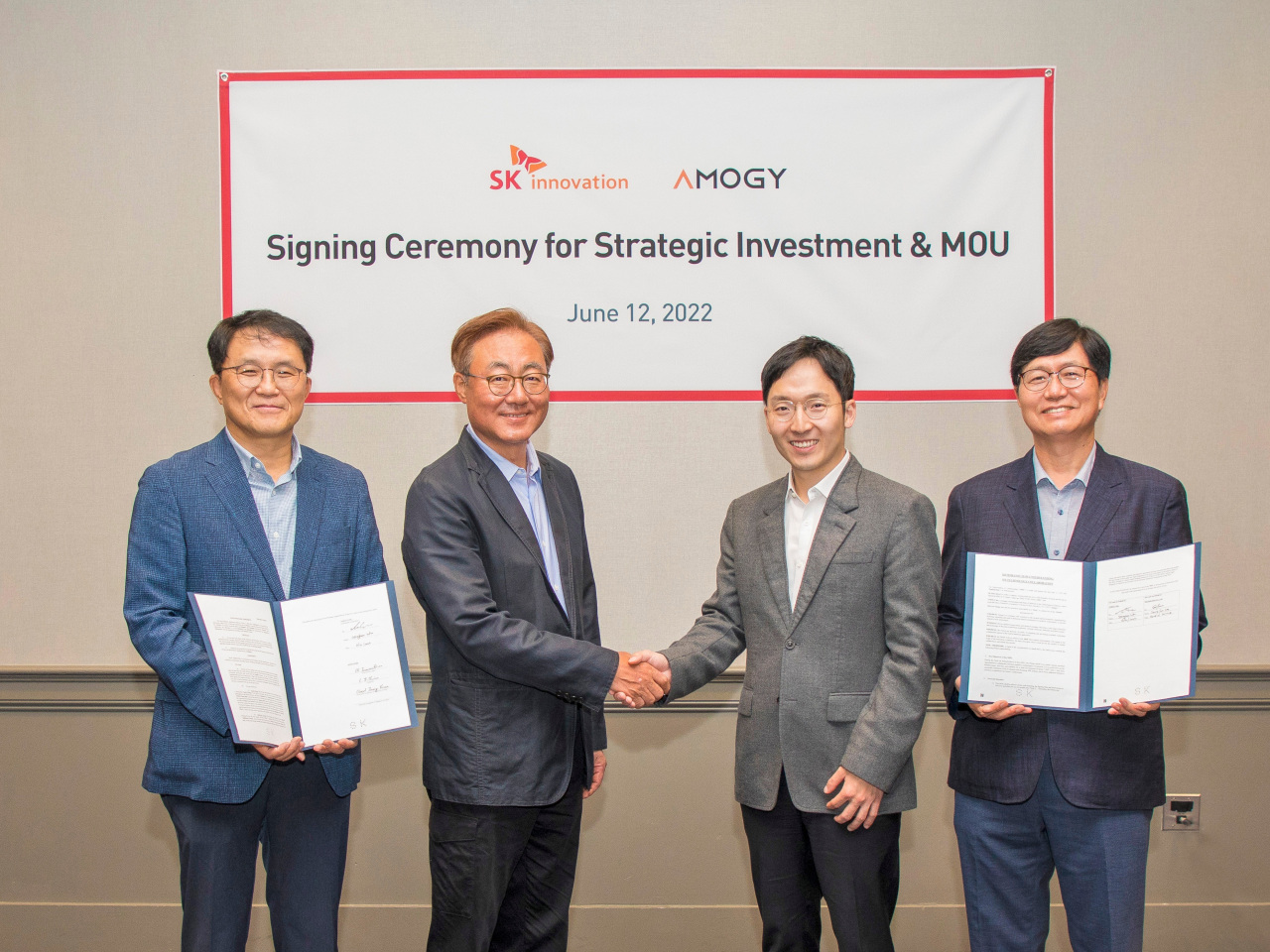 SK Innovation Vice Chairman Kim Jun (second from left) and Amogy CEO Woo Seong-hoon (second from right) shake hands after signing an MOU in San Jose, California, on Sunday, local time. (SK Innovation)
SK Innovation said on Tuesday it is investing $30 million in a US ammonia-based fuel cell startup for technological cooperation as it taps into new businesses to establish a “green portfolio.”

SK Innovation and Amogy signed a memorandum of understanding on Sunday in San Jose, California, to work together to develop ammonia-based fuel cell system technology and expand markets.

Founded in 2020 by four MIT Ph.D. alumni, Amogy focuses on research and development to produce compact ammonia fuel cell systems for industrial transportation such as tractors and drones.

Among its major shareholders are Amazon and AP Ventures, a UK venture capital company that invests mostly in the hydrogen industry.

Amogy has demonstrated a zero-emissions, ammonia-fueled 100-kilowatt tractor and a five-kilowatt drone, and plans to apply the same technology to large industrial vehicles such as trucks and ships by next year.

SK Innovation said it is making the investment because ammonia can be key to a hydrogen economy. It costs a lot to store and transport hydrogen in liquid form, from its point of production to its point of use, as it is liquefied at a temperature below minus 253 degrees Celsius.

Ammonia, a compound of hydrogen with atmospheric nitrogen, possesses a relatively high volumetric energy density compared to hydrogen and can be liquefied at minus 33 degrees Celsius, consuming less energy for liquefaction and emitting less carbon. Hydrogen can be extracted from ammonia to use as fuel.

To transport a kilogram of hydrogen from Australia to South Korea, it costs $1.7 to bring it in liquefied ammonia, compared to $3.4 in liquefied hydrogen.

Amogy has developed a compact, high-efficiency reactor that cracks ammonia and uses the hydrogen to generate power through a fuel cell. SK Innovation said it believes Amogy’s technology has high potential for commercialization in the industrial mobility market.