From left: Poster images of “Twenty-Five Twenty-One,” “Military Prosecutor Doberman” and “Our Blues,” which aired in the first half of the year (CJ ENM)
South Korea’s entertainment powerhouse CJ ENM seeks to strengthen its position as the country’s leading contents provider with star-studded TV series in the latter half of the year.

With the success of its previous projects, ranging from rom-com “Twenty-Five Twenty-One” to the company’s latest omnibus-style drama “Our Blues,” CJ ENM hopes to continue its content dominance with a wider range of genres.

“Alchemy of Souls,” tvN’s upcoming fantasy romance, will be the first out of the gate, premiering on June 18. 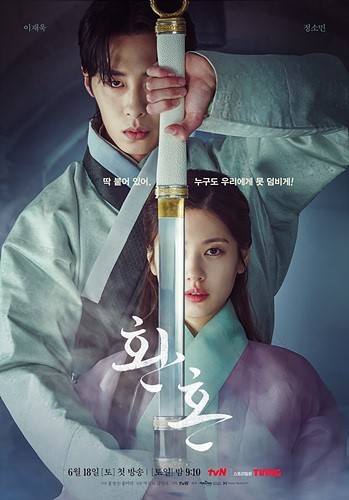 "Alchemy of Souls" (CJ ENM)
Written by the star writers Hong Jeong-eun and Hong-Mi-ran, who was behind the hit series “The Master’s Sun” (2013) and “Hotel Del Luna” (2019), the period drama features an elite warrior named Naksu (played by Jung So-min), whose soul is accidently trapped inside the weak body of Mu Deok.

Currently running “Link: Eat, Love, Kill” will be followed by the more heartwarming story of “Poong, the Joseon Psychiatrist” in early August.

Adapted from the 2016 Storyteller Contest’s excellence award-winning novel of the same title, the fantasy drama centers around a doctor named Yoo Se-poong (played by Kim Min-jae), who loses his qualification as a doctor after becoming involved in a conspiracy.

Exiled from the capital, Se-poong treats patients from all walks of life.

The medical drama shows Se-poong’s journey of becoming a true doctor who empathizes with the people.

Park Min-young, who established herself as the queen of romantic comedies in a number of hit series, including “Sungkyunkwan Scandal” (2010), “What’s Wrong with Secretary Kim” (2018), “Forecasting Love and Weather” (2022), will return with yet another rom-com, “Love in Contract.”

The series introduces the unusual job of “single life helper.” The story develops as the helper Choi Sang-eun (played by Park) writes two contracts with two different individuals, which requires her to date two guys on different days of the week.

The exact date of its premiere has yet to be determined.

The series presents a twin brothers’ journey to finding their stepfather’s killer. Actor Ji-sung will play the twins.

“Adamas” is scheduled to air its first episode on July 27.

The mystery, family drama revolves around the lives of three sisters, played by actors Kim Go-eun, Nam Ji-hyeon and Park Ji-hu, who must fight against the country‘s biggest conglomerate.

Netflix star Lee You-mi, who shot to an instant stardom in “Squid Game” and “All of Us Are Dead,” is set to return in a sports drama titled “Mental Coach Jegal Gil.”

Cast in a lead role for the first time, Lee will play a former world short track medalist who hopes to overcome her slump after meeting a mental coach played by Jung Woo.

The upcoming series is set to air in September.