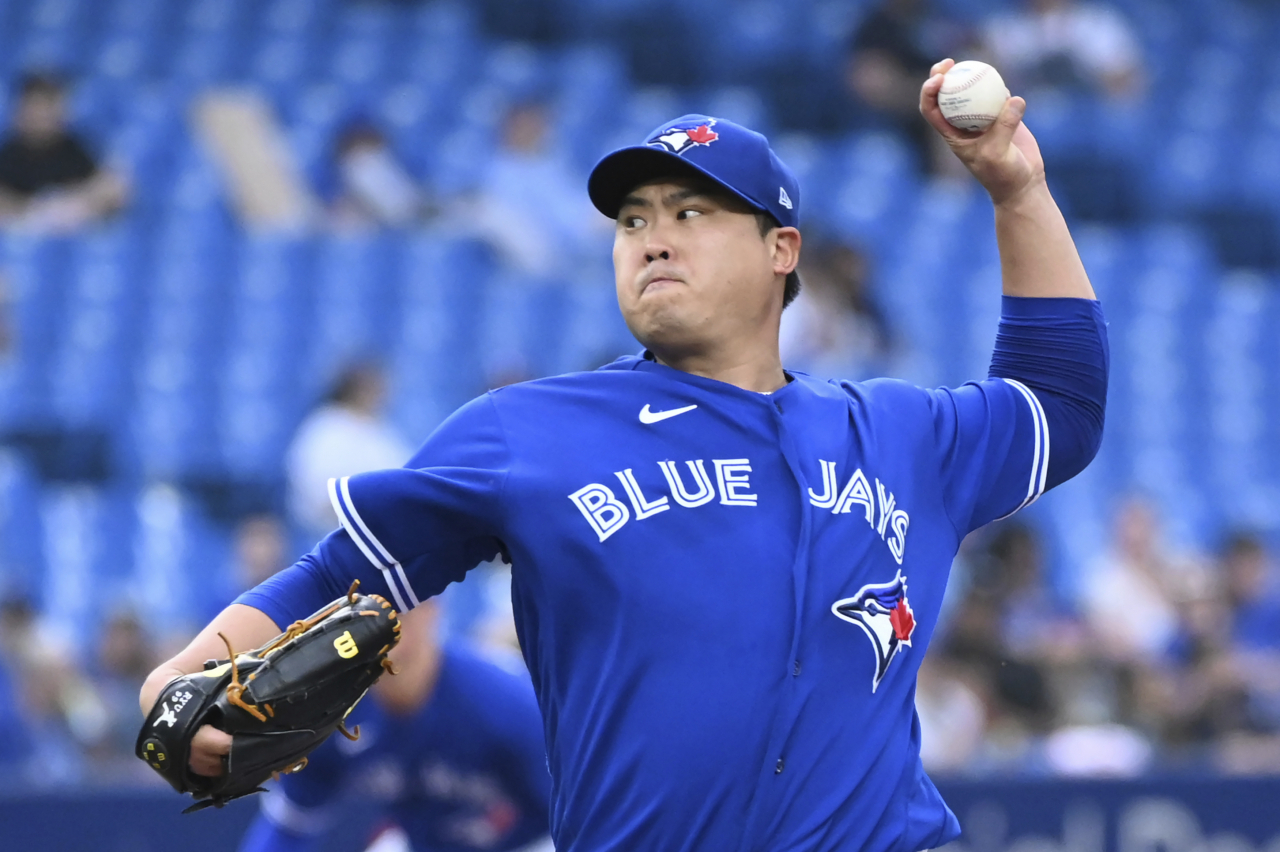 In this Canadian Press file photo via the Associated Press from June 1, 2022, Ryu Hyun-jin of the Toronto Blue Jays pitches against the Chicago White Sox during the top of the first inning of a Major League Baseball regular season game at Rogers Centre in Toronto. (Canadian Press)

The Toronto Blue Jays lost their South Korean starter Ryu Hyun-jin to arm problems following his outing on June 1. Nearly two weeks later, they still have no idea when he will be back.

Following the Blue Jays' 6-0 win over the Detroit Tigers at Comerica Park in Detroit on Sunday (local time), manager Charlie Montoyo said, "I don't even know how Ryu is right now."

"He's a ways away," Montoyo told reporters. "I'm not saying he's done (for the season) but he's a ways away. I'm not even thinking about that right now."

This was Montoyo's response to a question on whether Ryu would take the rotation spot back from Ross Stripling, who has pitched well while filling in for the South Korean.

Stripling tossed six shutout innings while giving up just one hit against the Tigers. In the start before this, Stripling had held the Kansas City Royals scoreless over five one-hit innings.

Ryu left that June 1 start against the Chicago White Sox after just four innings and 58 pitches, and the Blue Jays later said Ryu had experienced left forearm tightness. He was placed on the 15-day injured list (IL) with left forearm inflammation, the second time he'd hit the sidelines with arm trouble. Further tests revealed a forearm strain and elbow inflammation.

Last Thursday, Ryu visited Dr. Neal ElAttrache at Cedars-Sinai Kerlan-Jobe Institute in Los Angeles for a second opinion on his ailing arm. ElAttrache performed season-ending shoulder surgery on Ryu in May 2015. Ryu returned to action in July 2016 but made only one start that season before shutting things down with elbow problems.

The Blue Jays previously said they didn't think Ryu's injury was serious, but they have yet to determine the next step for Ryu, be it operation or rehab.

Ryu is 2-0 with a 5.33 ERA in six starts this season. Ryu had pitched well in his three outings in May after his first IL stint, posting a 1.72 ERA with two wins.

Ryu later said he had experienced some forearm trouble before the White Sox game and he regretted taking the mound.

The 35-year-old is in the third year of his four-year, $80 million contract. (Yonhap)