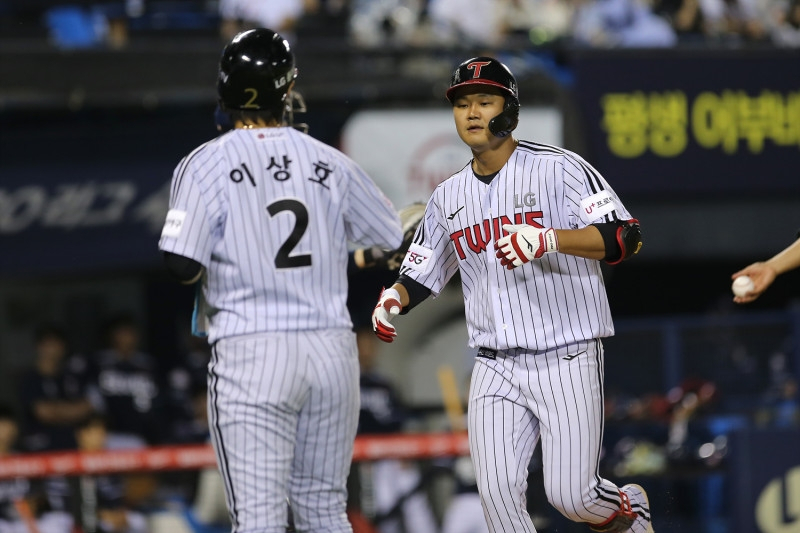 Son Ho-young of the LG Twins (R) is congratulated by teammate Lee Sang-ho after hitting a two-run home run against the Doosan Bears during the bottom of the eighth inning of a Korea Baseball Organization regular season game at Jamsil Baseball Stadium in Seoul last Friday, in this photo provided by the Twins. (Yonhap)

After taking a circuitous route to the top South Korean professional baseball league, LG Twins' infielder Son Ho-young is trying to stake his claim as an everyday second baseman, not with his signature glove or speed, but with his bat.

An opportunity has opened up for Son this month after veteran second baseman Seo Geon-chang was sidelined with an injury to his right side. Seo's initial backup, Song Chan-eui, enjoyed a good stretch in late May while spelling Seo, but has been quiet in June. And Song isn't close to being the defender that Son is.

Son, a former Chicago Cubs minor leaguer and 23rd overall pick by the Twins at the 2019 Korea Baseball Organization (KBO) draft, belted his first career home run on June 1. He had gone homer-less over the past two years, though he only had 40 at-bats in that span.

Son then went deep again on Friday against the Doosan Bears, and batted 4-for-7 with two triples and three RBIs over the weekend, as the Twins split the final two games of the series at Jamsil Baseball Stadium in Seoul.

So far in June, Son is 7-for-13 with two home runs and six RBIs, along with six runs scored.

After a 9-6 victory on Sunday, Twins manager Ryu Ji-hyun singled out Son as one of the stars.

"It was such an exciting game that we played today, and Son Ho-young in particular came prepared both physically and mentally," Ryu said. "He put on quite a show today."

Son, batting eighth, drew a walk in his first time up in the second inning. After striking out in the third with two runners aboard, Son responded with an RBI single in the fifth that put the Twins within one, at 5-4. The Twins would score three more runs in that inning to take a 7-5 lead.

And with his club leading 8-6 in the eighth inning, Son knocked in an insurance run with a two-out triple down the right field line.

Son began this season in the minors but was called up in mid-May as a backup infielder. He appeared at first base, third base and shortstop, while also handling some pinch-hitting and pinch-running duties.

Son's defense and speed had hardly been in question in earlier seasons, and those tools had helped make him a useful backup. But his power surge, albeit in a small sample, comes as a surprise.

Son did not take a traditional path to the KBO.

Son dropped out of a South Korean college in 2013 and signed a minor league deal with the Cubs the following year. He got released before the 2017 season and returned home to complete his mandatory military service. Afterward, Son played some independent ball before being drafted by the Twins.

Once Seo returns from his injury, he will likely be back as the regular second baseman. He is making too much money -- 260 million won ($203,240), compared to 35 million won for Son -- to be riding the pine.

But if Son can continue to swing the bat the way he has of late, he will at least make lineup decisions more interesting. (Yonhap)