Step out of Exit No. 12 at Dongdaemun History & Culture Park Station on the Seoul subway and turn left at the second corner, and you will yourself surrounded by the Cyrillic alphabet.

The area is commonly known as the Gwanghui-dong Central Asia Street, with scores of shops run by Russians, Uzbeks and Mongolians.

The street is one of the unique features of the area around the Dongdaemum History & Culture Park station, alongside shopping areas old and new and an exhibition center -- the “giant spaceship” that is Dongdaemun Design Plaza. 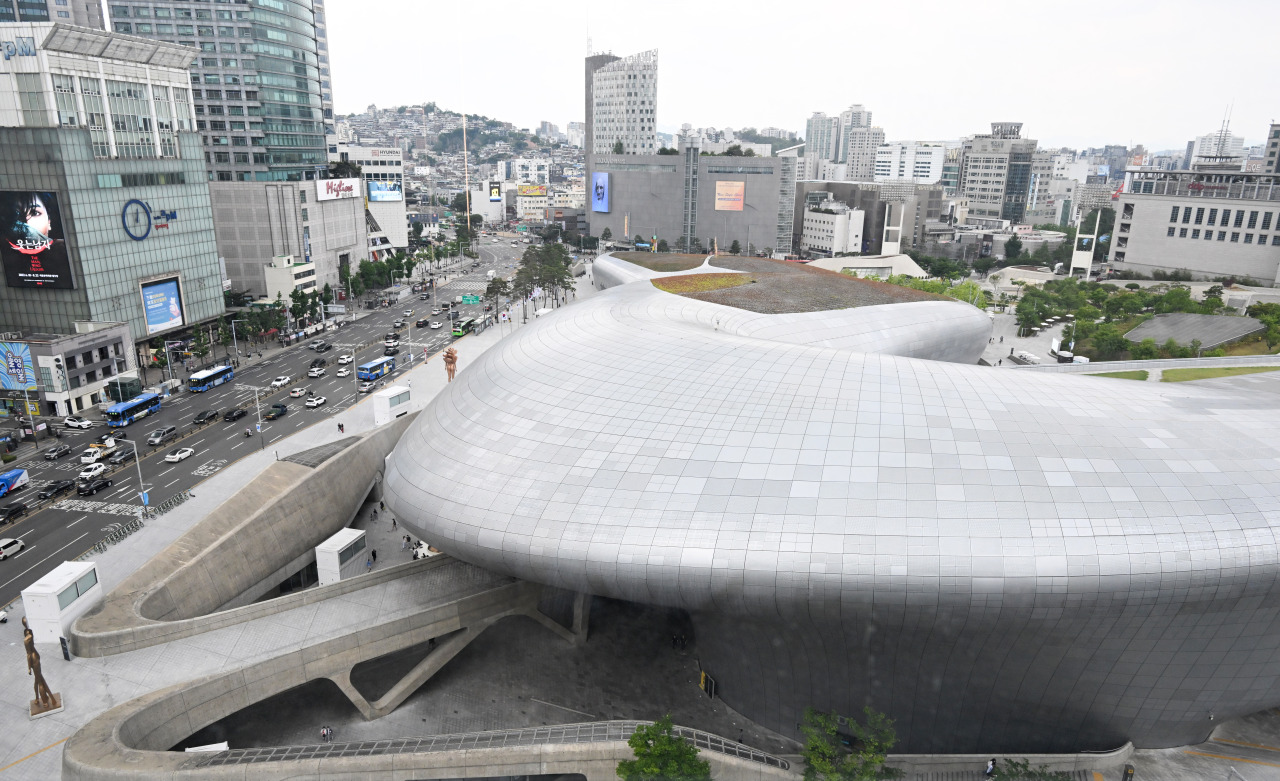 Silk Road in the heart of Seoul


According to Seoul Sarang, a monthly lifestyle magazine published by the Seoul Metropolitan Government, there are around 150 establishments related to people from Central Asia, Russia and Mongolia in the Central Asia Street. It formed in the early 1990s, as Seoul and Moscow established diplomatic relations and Russian merchants gathered around textile stores in the area, located in Seoul’s central district of Jung-gu.

One of the first eateries along the Central Asia Street is Star Samarkand, which offers dishes like Uzbek plov (a type of pilaf that mixes rice, beef and spices), chicken tabaka, borscht, Russian dumplings, and skewered meat dishes called shashlik that use lamb, beef or chicken. It is among several restaurants in the area using the name Samarkand, which is the world’s oldest continuously inhabited city, located in southern Uzbekistan.

Strolling down the road, you will be welcomed by stores selling samsa and lepeshka -- types of Uzbek bread -- and a store rather bluntly promoting its products with the name, “Russian Cakes.”

But the street is filled with not only stores and restaurants, but also other facilities and establishments catering to people from Russia and Central Asia. Cyrillic signboards for banks, hair salons, and job agencies are everywhere. Even the Seoul branch of Mongolia’s State Bank is located on the Central Asian Street.

Emperia Foods, of which there are two branches in the area, buzzes with customers of numerous nationalities seeking to buy bread, sausages, beverages and other goods.

In the Mongolian sector of the street, there is a restaurant called Mongol Nomadic, with an interior reminiscent of a Mongolian yurt -- a kind of portable, round tent commonly used by nomadic groups in Central Asia. The restaurant’s feature menu item is khorkhog, a type of Mongolian barbecue dish made by cooking meat inside a container with hot stones and water.

On the outskirts of the street and near Exit No. 7 of the subway station is cafe Baikal, which sells delicacies from the Republic of Buryatia, a federal subject of Russia located in Siberia.

But the Central Asia Street as of the first week of March was mostly absent of its usual vibrant nature for whatever reason, with one left to speculate whether it was the effect of the ongoing pandemic or the recent international conflict sparked by Russia’s invasion of Ukraine. 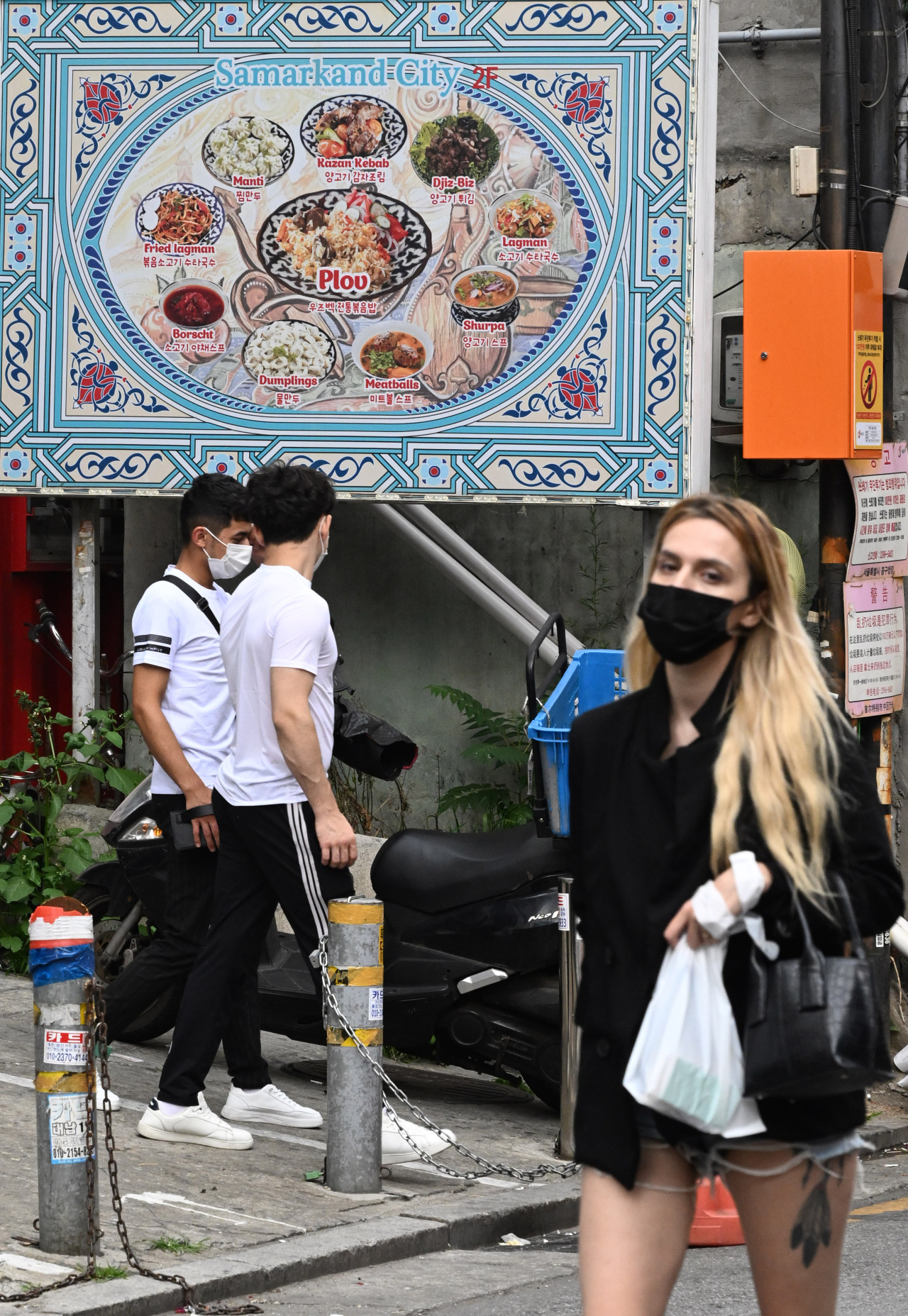 
Admittedly, shopping in Dongdaemun is not as glamorous as it is in Gangnam or Apgujeong, the “Beverly Hills of Seoul.” But it does have its perks, such as relatively inexpensive and accessible shops.

Dongdaemun Fashion Town refers to the shopping district -- with both wholesale and retail shops -- surrounding the subway station and Dongdaemun Station just one stop to the north. It was designated as a special tourist zone in May 2002 by the Ministry of Culture, Sports and Tourism, and is the largest shopping district in the country.

Its homepage (www.dft.co.kr) is only in Korean, but Visit Korea (www.visitkorea.or.kr) provides basic information about the area including accommodations, restaurants, shopping centers and transportation.

Outside Exit No. 14 are the more modern shopping complexes like Migliore’s Dongdaemun Branch, Goodmorning City, APM, Doota and Maxstyle, which appeal mostly to younger shoppers.

The outdoor stage in front of Goodmorning City is often used for music or tourism events.

Walk further north, and you will find the traditional stores -- the Dongdaemun Market and Dongdaemun Wholesale Shoes Shopping Mall, which are actually located near Dongdaemun Station on subway Line No. 4.

Before you reach this area, you will cross the bridge over Cheonggyecheon, and find another historical market building called Pyoung Hwa Fashion Plaza. This particular building is currently a shadow of its former glory, but the tragic struggle of its workers was a key event in Korea’s labor movement.

The area around Cheonggyecheon became a popular place for clothing and textile stores around the 1960s, led by the creation of the Pyoung Hwa Market in 1962. Despite its rapid growth in the 1970s, it had abysmal working conditions. Textile workers, many of whom were underage, worked an average of 14 to 15 hours a day in confined spaces and poor conditions.

In 1970, textile worker and activist Jeon Tae-il set himself on fire with a printed copy of the Labor Standards Act in protest of dire working conditions that many workers faced at that time. He died as a result, and became an icon of the country’s labor movement.

As of 2022, the market consists mostly of wholesale clothing shops. 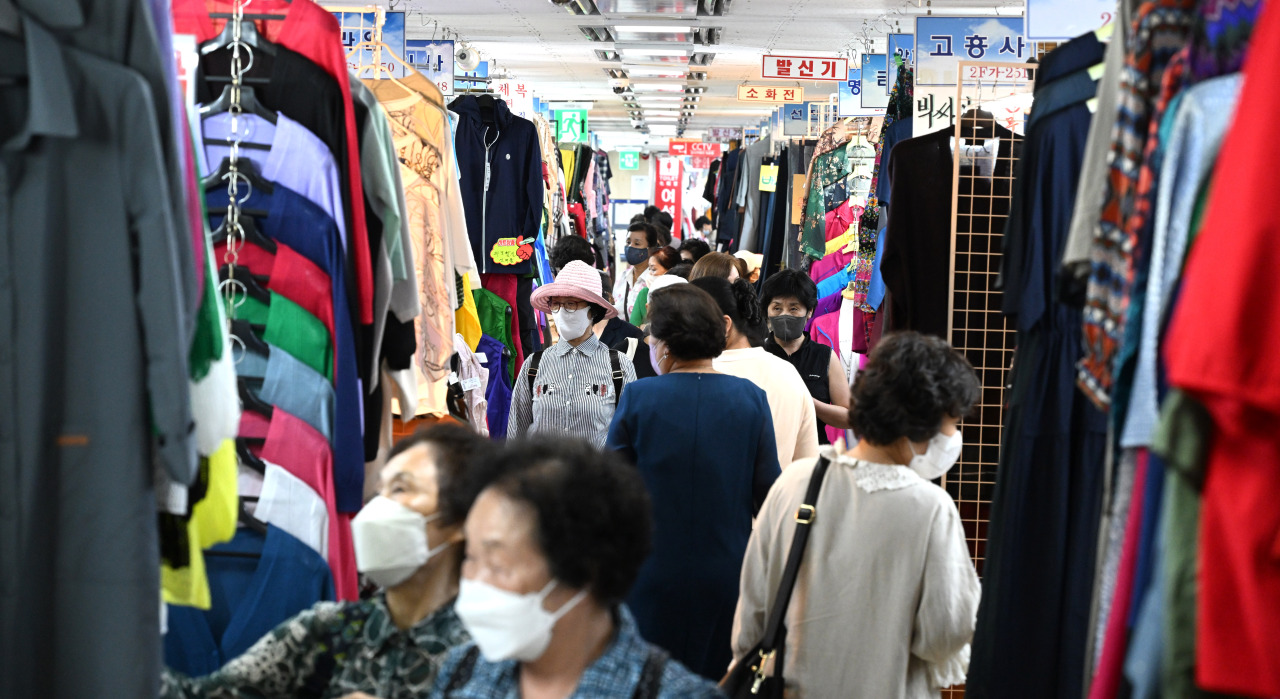 For tourists wishing to get relevant information, there are five tourist information centers in the area with English, Japanese and Chinese travel guidebooks. Right beside the one located in front of Doota Shopping Mall, there is also a Korea Tourist Police Station.

Tourist Police are police officers stationed at the most populated tourist sites across the country, providing services mostly for foreigners or visitors to those areas.


The park and the DDP


The Dongdaemun History & Culture Park, located behind Dongdaemun Design Plaza, is commonly referred to as DDP and is accessible directly from the station. It was built in 2009 in the place of the demolished Dongdaemun Stadium, which had been the station’s namesake and the oldest sports arena in the country before it was torn down in 2007.

The stadium is commemorated in the Dongdaemun Stadium Memorial Hall.

Other features include the Dongdaemun History Museum Exhibition Hall and the Joseon Dynasty-era remains and relics that were discovered during the park’s construction, including the Yigansumun water gate and Chiseong defense facility.

The DDP is a massive silver complex that functions as exhibition center, shopping mall and food court. It also has shops that specialize in products with experimental designs, such as the DDP Design Store, which recently opened its own online shopping mall.

Also in front of the DDP is a place where you can buy tickets for the Seoul City Tour Bus. The bus stop is located right across the street from the APM shopping mall, about a five-minute walk from Exit No. 1 of the Dongdaemun History and Culture Park Station. The bus makes stops at major tourist spots across the city, with the traditional culture course covering Seoul’s central area and the Hangang-Jamsil course travelling south of the Han River to cover spots like Hangang Ttukseom Resort and Lotte World Tower.

Reservations and information about the bus can be accessed via its homepage, which is in Korean, English, Japanese and Chinese.