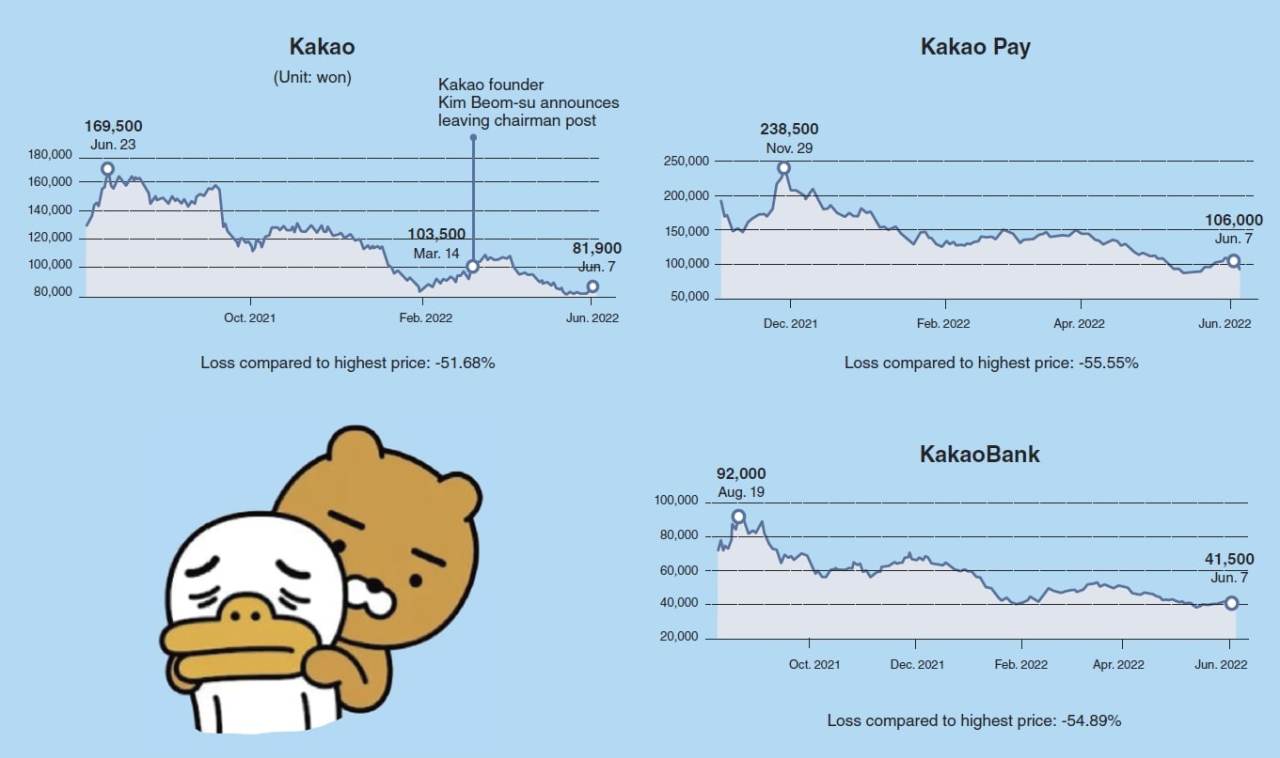 Graphs showing the change in stock price for Kakao, Kakao Pay and KakaoBank (The Korea Herald)
Kakao Pay shares tumbled Wednesday morning after it was reported that its second-largest shareholder Alipay was looking to sell 5 million shares -- about 10 percent of the total stake it holds in Kakao Pay -- in a block deal. The stock price of Kakao Pay fell 15.57 percent to close at 89,500 won.

Despite the sell-off, the payment arm of IT giant Kakao said Alipay will continue to be a strategic investor and remain the second-largest shareholder, with 34.72 percent of Kakao Pay shares, and the two sides will carry on with their strong partnership.

Experts, however, said this could be the beginning of an ugly turn of events.

An analyst at a local securities firm told The Korea Herald that the risk of overhang remains with Alipay’s block deal.

“Alipay holds a lot more Kakao Pay shares, so it could sell some of the remaining amount or more. This possibility of dumping off shares has a negative impact for other shareholders as it was seen in today’s price drop,” the analyst said.

Park Sang-hyun, an insight provider at independent investment research network Smartkarma, pointed out that Alipay’s return on its Kakao Pay investment is 10 times, so it may be natural to realize a profit to some extent.

“But the local market believes that the strategic partnership is cracking, starting with this stake sale. It is highly likely that Alipay will go through a multiphased stake sale process,” Park added.

The sharp drop in Kakao Pay’s stock price marked the latest hiccup in a series of disappointments for Kakao Group in the past nine months.

About a month later, Kakao founder Kim Beom-su was ranked as the richest person in the country by the Bloomberg Billionaires Index. His net worth was estimated at $13.4 billion. The report said Kim was an exemplary case of how a self-made entrepreneur could succeed in Asia’s fourth-largest economy, which has long been dominated by its family-controlled conglomerates.

The tech giant, which rose to prominence with its messenger app KakaoTalk, climbed up the ladder through aggressive expansion of businesses. At the end of the first half of 2021, Kakao had over 150 subsidiaries and affiliates in and out of the country.

However, the platform behemoth’s heyday did not last long.

The company -- once touted for the legendary tale of its self-made entrepreneur founder and the success of technological innovation in the 21st century -- has undergone a series of blunders and setbacks in recent months.

In September, Kakao’s people-friendly image first faced criticism over the company’s rapid expansion, said to have driven small merchants out of business. That led to Kakao’s pledge to pull back some of the company’s services in industries such as snacks and flower delivery.

To avert public criticism, Kakao vowed to create a fund of 300 billion won to support small firms and the self-employed, but its misfortunes continued.

In the same month, the founder’s investment company K Cube Holdings -- the de facto holding company of Kakao -- was accused of having private interests as well as the illegal succession of family members in employment. More allegations piled on, as K Cube Holdings was accused of fabricating regulatory documents.

Kim later apologized at a National Assembly state audit, saying the investment company would change to be committed to social responsibilities.

A series of megasized initial public offering deals that further raised Kakao’s market profile, ironically, exposed the root cause for its downfall.

A mass sale of Kakao Pay shares by executives including Ryu Young-joon, the then-appointee for Kakao’s next co-CEO, struck the company hard in January.

Ryu, who was CEO of Kakao’s mobile payment unit Kakao Pay, was found to have exercised his stock option to sell company shares in December, only a month after the company’s listing. Through this, he and several senior executives collected a total profit of almost 90 billion won, with Ryu taking about half of the gains.

Kakao saw fierce backlash from the company’s labor union, retail investors and the general public as the executives raked in massive profits at the expense of investors. Combined with the group’s hasty expansion that had hit small businesses last year, the irresponsible money-making decision raised concerns over whether the IT group could maintain accountable corporate governance.

Kakao released an apology, vowing to ban CEOs and executives at its subsidiaries from selling company shares within one to two years after being listed on the market through setting up a new control tower.

In March, Kim resigned from his chairman post of the board of directors, leaving behind ailing stock prices and loss of trust among investors.

Kakao’s stock price, which hit as high as 169,500 won per share at the close of June 23, 2021, has halved to a little over 80,000 won per share almost a year later. The stock prices of Kakao Pay and KakaoBank have also suffered similar or worse downfalls, losing trillions of won in the process.

On top of losing confidence from the market, the IT giant has irked its own crew.

Last week, Kakao unveiled its new “metaverse” working system where employees could basically work wherever they want. The seemingly future-oriented scheme, however, was met with internal resistance from employees, as the new system would require being connected online through a voice channel at all times.

Kakao workers expressed concerns and discontent on an in-house online community space, saying the new policy was as an attempt to spy on employees.

Kakao CEO Namkoong Whon later said in an announcement to staff that being connected to the voice channel would be decided by crew members in different groups or work areas, but did not scrap the plan. Regarding the implementation of a mandatory working time from 1 p.m. to 5 p.m., he said the company will reconsider the plan through communication with staff.

Without working on mending ties with stakeholders in and out of the company, Kakao instead unveiled its new vision, “Kakao Universe,” on Tuesday, saying it wants to go beyond Korea. The CEO said they will look to reach 5 billion people across the world through open links that connect them based on their interests instead of targeting South Korea’s 50 million domestic users.

But if Kakao cannot redeem itself as the people-friendly company it once was with the rise of its dominant messenger app, experts say it will be difficult for the company to win back people’s hearts and bounce back.

“I think Kakao’s stock prices are not doing well due to its subsidiaries going public. Naver has only one entity in the bourse, but Kakao’s other firms have been listed and this has cemented Kakao’s image as a firm that conducts (IPOs) to sell shares to make money,” an analyst at a local private equity firm told The Korea Herald.

“Kakao’s growth has been done through mergers and acquisitions, as well as some unethical moves such as taking the business of small merchants. Its corporate governance is also seemingly abominable,” he added.