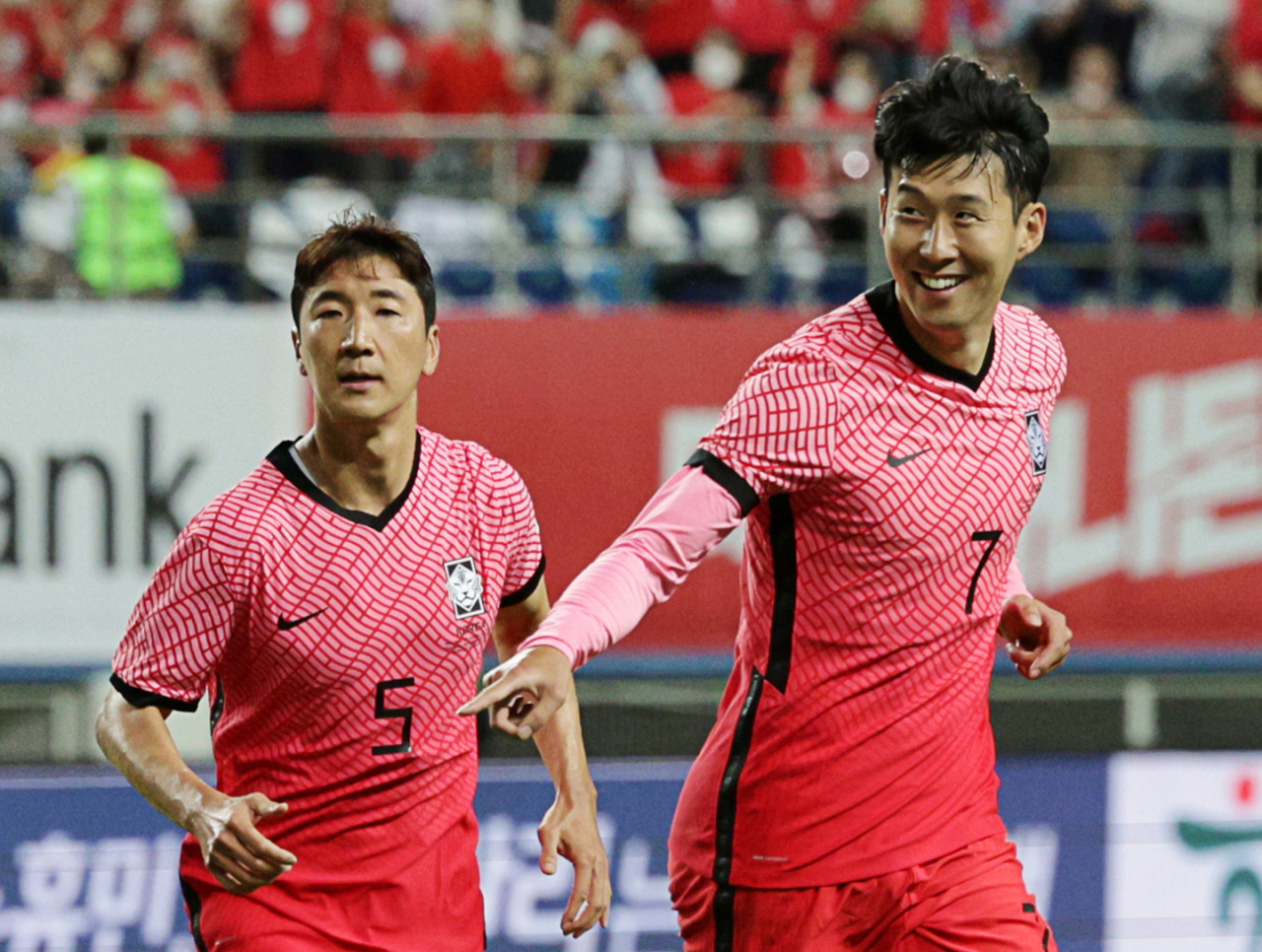 Son Heung-min of South Korea (R) celebrates after scoring a goal against Chile during the countries' football friendly match at Daejeon World Cup Stadium in Daejeon, some 160 kilometers south of Seoul, on Monday. (Yonhap)

After a successful bounce back from a demoralizing defeat, South Korea will chase their second straight victory in men's football on Friday against Paraguay while also seeking much-needed improvements from their defense.

The kickoff between 29th-ranked South Korea and No. 50 Paraguay is 8 p.m. at Suwon World Cup Stadium in Suwon, some 35 kilometers south of Seoul.

This will be the third of four friendly matches that South Korea will play in June. They lost to Brazil 5-1 last Thursday but blanked Chile 2-0 four days later, with captain Son Heung-min scoring a late free kick goal in his 100th international match.

After Paraguay, South Korea will host Egypt in Seoul next Tuesday.

These matches are part of South Korea's preparation for the FIFA World Cup in Qatar in November.

South Korea have had two wins, three draws and one loss against Paraguay so far. Their most recent meeting was a friendly in October 2014, when South Korea prevailed 2-0.

Of the four opponents for South Korea this month, Paraguay, which missed out on the World Cup, are the lowest-ranked team. They made a stop in Sapporo last Thursday, and Japan enjoyed a convincing 4-1 victory.

There are few names on the Paraguayan team that casual fans would recognize, save for Newcastle United midfielder Miguel Almiron and former West Ham United defender Fabian Balbuena, who is currently playing for Dynamo Moscow in Russia. Paraguay have lost four of their five matches so far in 2022, while getting blanked three times.

This sets up a perfect opportunity for South Korea's shaky defense corps to get their act together in a less stressful setting. It remains an area of concern for head coach Paulo Bento.

South Korea looked overwhelmed at times against Brazil's high pressing, as skilled and speedy forwards forced errant passes from flustered defenders. Chile, taking cues from their fellow South Americans, also put some pressure on South Korean defenders early. Bento had inserted two new players into the starting lineup against Chile, as center back Jung Seung-hyun and right fullback Kim Moon-hwan got the nods. But they experienced much the same problems that the veterans that they'd replaced, Kim Young-gwon and Lee Yong, had against Brazil.

The absence of Fenerbahce center back Kim Min-jae, out with an ankle injury, has been sorely felt. South Korea are a completely different team without the versatile 25-year-old.

Bento recently called Kim the fastest defender for South Korea. Kim is just the kind of safety valve that South Korea can turn to when faced with tight forechecking, thanks to a combination of his speed, composure and ability to make smart outlet passes.

Kim is also a physical defender who was barely challenged by Asian forwards during South Korea's World Cup qualification run. It would have been fascinating, for both strategic purposes and sheer entertainment value, to see how Kim would have fared against Neymar and other skilled Brazilian attackers.

Kim will also miss the remaining two matches this month, and he will only have two friendlies in September before jumping into his first World Cup two months later.

Meanwhile, Bento would be wise to prepare a plan B for his defense in case Kim cannot go at the World Cup. Relying so heavily on one defender is always a dicey proposition.

At fullback positions, the 35-year-old Lee Yong and the 31-year-old Hong Chul may no longer be viable options at a high level. The talent pool there is noticeably thin for South Korea, though Kim Jin-su, a young veteran left back with 55 caps at 29, would have been getting the bulk of action this month if not for a recent hamstring injury.

Bento selected two international rookies on defense for June: Suwon FC fullback Park Min-gyu and Daejeon Hana Citizen center back Cho Yu-min. They didn't play against Brazil or Chile, but Bento may be tempted to go with them in the remaining matches and see if they can be an upgrade over some veterans.

South Korea's offense has been fine. Even against Brazil, South Korea pushed back in the second half and Bento praised his attackers for their gritty performance. Scoring just one free kick goal after Chile went down a man left much to be desired, but there was little that went wrong with the offensive process.

It will bear watching what Bento decides to do with Son this time. Against Brazil, the Premier League Golden Boot winner started as a winger, a familiar position for him in international play, before moving up to the striker position in the second half when the starter Hwang Ui-jo was subbed out. Bento said afterward he wanted to keep things simple and not experiment too much with his offensive formation when he knew South Korea would have to spend most of the match defending.

Then versus Chile, Son got the start as the striker, and Jeong Woo-yeong, an energetic midfielder, started on the wing. The two had a few promising moments, and Jeong picked up an assist on Hwang Hee-chan's opening goal.

After a day off versus Chile, Hwang Ui-jo may slide back into the mix as the lone striker, which would then move Son back to the wing. (Yonhap)