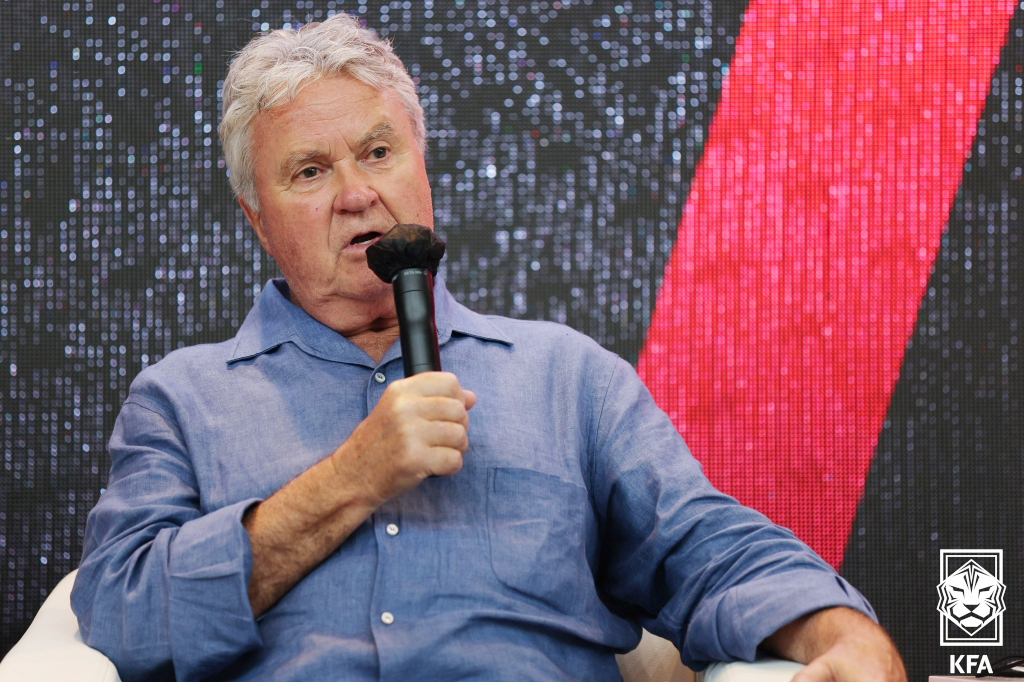 Guus Hiddink, former head coach of the South Korean men`s national football team, speaks during a football conference organized by the Korea Football Association in Seoul on June 3, 2022, in this photo provided by the KFA. (Yonhap)
Former South Korean men's football head coach Guus Hiddink liked what he saw from his old team Thursday night, even in a 5-1 defeat to Brazil in a pre-World Cup friendly match in Seoul -- to a degree that the Dutchman doesn't think the Taeguk Warriors should change much in the way they play.

The current bench boss, Paulo Bento, has come under fire for sticking to the same style of play, perhaps stubbornly so, even when the strategy that has worked against some underdogs in the past won't be as effective against tougher foes in the World Cup this fall.

Hiddink, who guided co-hosts South Korea to the semifinals at the 2002 World Cup, said the preparation should come down to fine-tuning details, rather than undergoing sweeping changes.

"You should keep your own style of play. If not, players get a little bit insecure," Hiddink said Friday after attending a coaching conference in Seoul organized by the Korea Football Association.

The event was part of a weeklong celebration of the 20th anniversary of the 2002 World Cup. Hiddink, the most successful coach in South Korean football history, has been a prominent figure throughout the celebration, and attended Thursday's match with some of his players from the 2002 squad.

Hiddink said the goals South Korea conceded were mostly due to "individual errors" and that he believes Bento, as an experienced coach who has been at the helm for nearly four years, can address those issues over the next five months.

"Mainly, you must stick to your way of play. You must work on your details," Hiddink added. "I wouldn't like Korea to go back to old times, playing with five or even sometimes six defenders, always guarding their own box. I like the way they play now more than the old style."

Hiddink noted South Korean players were "a bit naive" when faced with Brazil's high pressing, which resulted in lost possession near their own box.

"Hopefully, they will learn from this," Hiddink said. "If you go play a bit naive and lose your possession easily, next to your box, then you're in trouble. The key is, don't make stupid errors. But don't forget you played one of the two or three best teams in the world." (Yonhap)