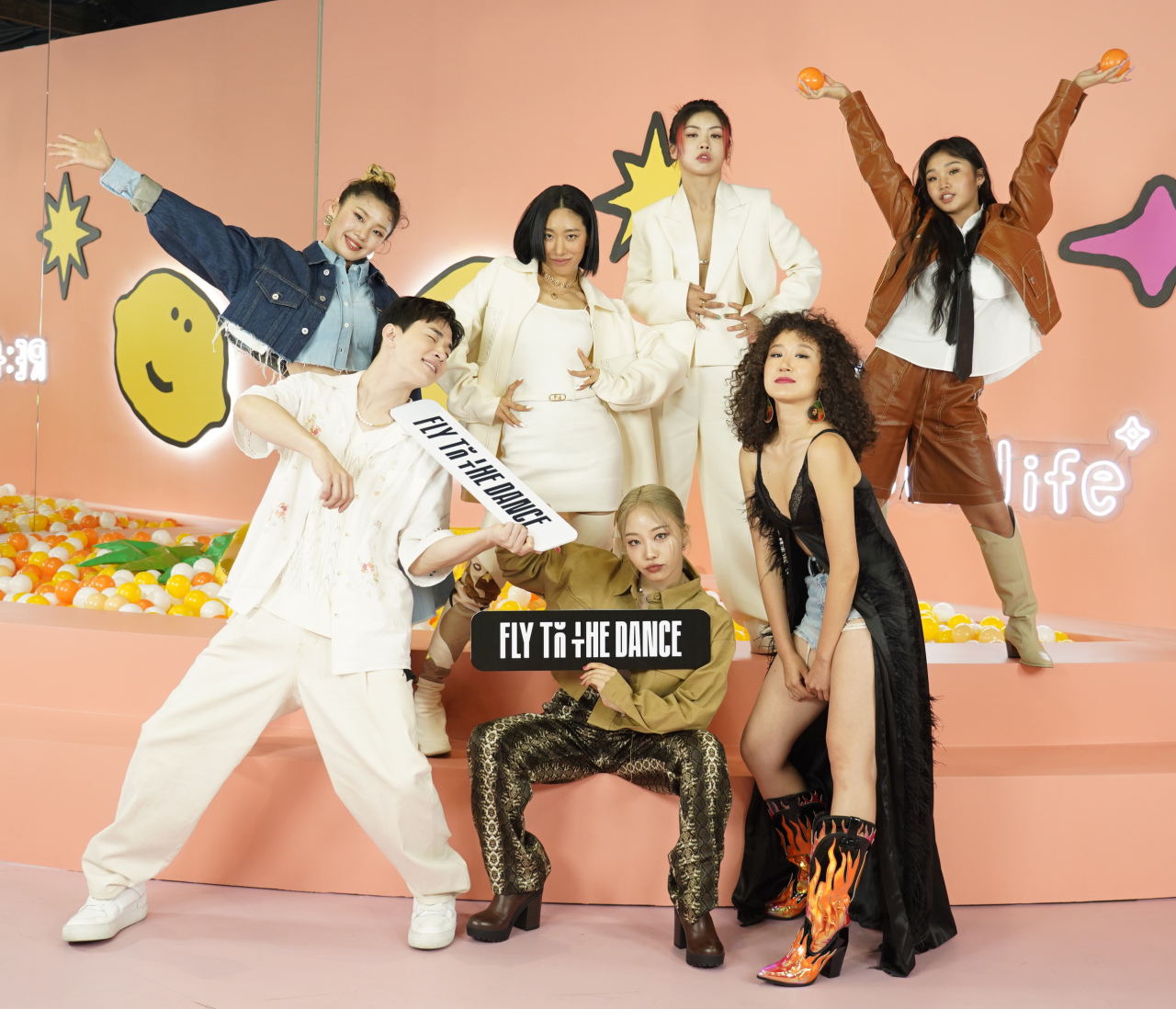 Clockwise from top left: Leejung, Lia Kim, Aiki, Harimu, Love Ran, Amy and Henry pose for photos during a press conference for JTBC’s “Fly to the Dance” in Seongsu-dong, eastern Seoul, Friday. (JTBC)
The producers of JTBC’s popular busking series “Begin Again” are back, this time with a dance-based busking reality program. Korea’s top female dancers and choreographers journey through streets of New York and Los Angeles, showing off their dance moves and providing the vicarious satisfaction of overseas travel to audiences who have been unable to go abroad amid the pandemic.

“It’s the first program taking place overseas after the global crisis of the COVID-19 pandemic outbreak. It took a lot of work because it was shot just as the US was gradually easing social distancing rules,” said producer Song Kwang-jong at a press conference in Seongsu-dong, eastern Seoul, Friday.

“It felt like dancing is a lingua franca. If we had singing performances instead of dancing, we wouldn’t have been able to receive such an enthusiastic response from the audiences there,” he said. “We thought the audiences also missed watching dance moves. We were connected through the live performances.”

Lia Kim recalled the hardships of preparing dance moves for 90 songs in just two weeks. “I wasn’t sure whether it was the right program to appear on or not. At the same time, I had been wondering if my passion for dance had diminished. But I started loving dance even more through the program.” 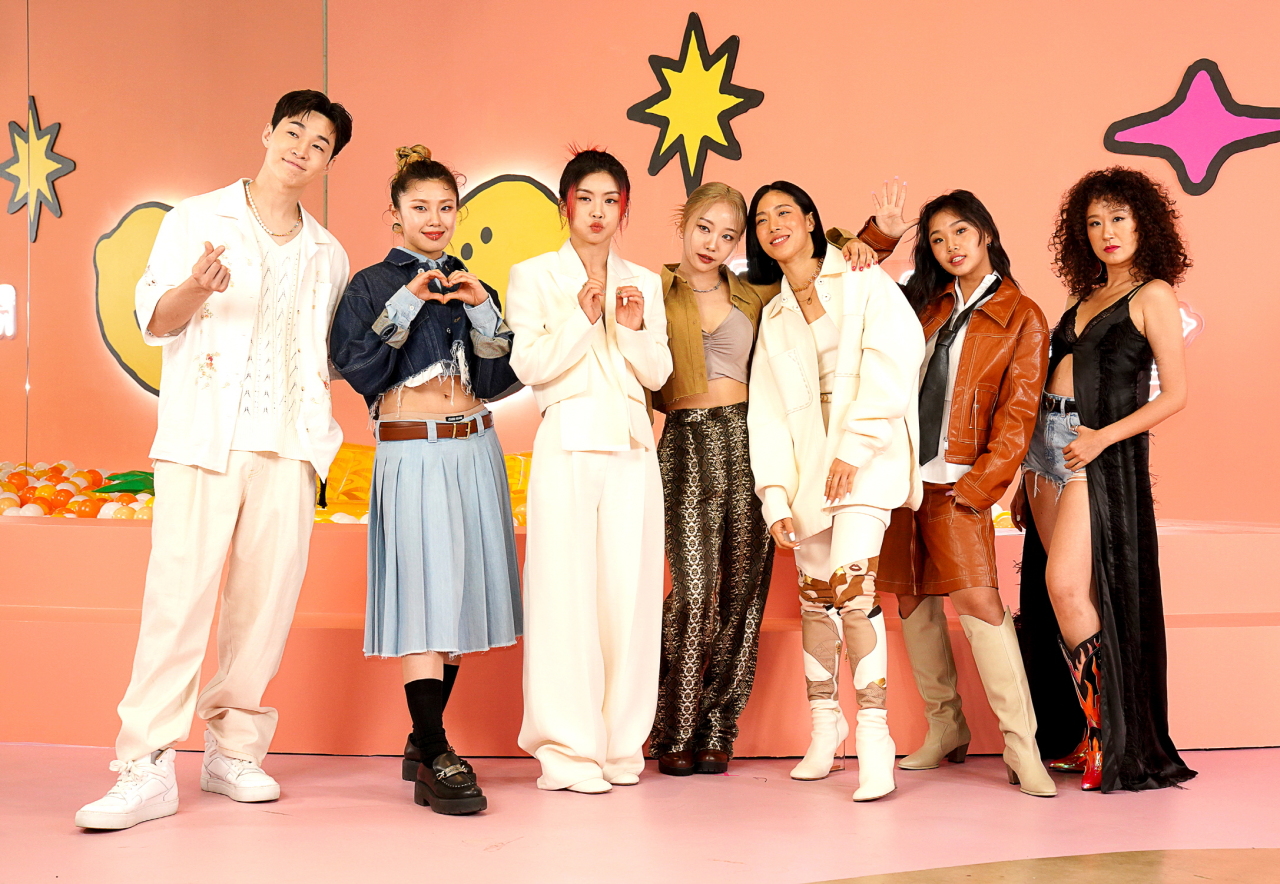 From left: Henry, Leejung, Aiki, Amy, Lia Kim, Harimu and Love Ran pose for photos during a press conference for JTBC’s “Fly to the Dance” in Seongsu-dong, eastern Seoul, Friday. (JTBC)
“I was able to recall the memories of ‘Street Woman Fighter.’ Going abroad means participating in competitions, which makes me nervous and scared. But I was able to enjoy the moments with other members this time,” Aiki said.

Leejung also said that “Fly to the Dance” will likely quench viewers’ thirst for live dance performances and travel. She showed her pride in Korean dance, saying K-pop is not just a culture but a “revolution,” backed by a number of talented choreographers and directors.

Henry, who joined the program as a music director, opened up about returning to Korean reality TV after being embroiled in a pro-Chinese controversy. “The past few months have been the most excruciating time in my life. I was worried about affecting many others because of me.”

“I hope to deliver good energy to as many people as possible regardless of gender or nationality through music and performances onstage,” the singer said. “Instead of focusing on nationality and political issues, I hope you see beyond them. I hope you stop here. I’ll do my best.”

Henry further said he was able to appear on the dancing-busking show because of his strong belief in the program‘s producer, whom he has known for about five years through “Begin Again.” The producer also said that he had cast Henry before the scandal, and thought his musical talent and passion for dance made him the best choice for the show.

Song also expressed a desire for multiple seasons of the show featuring the same crew members busking in different countries around the globe.