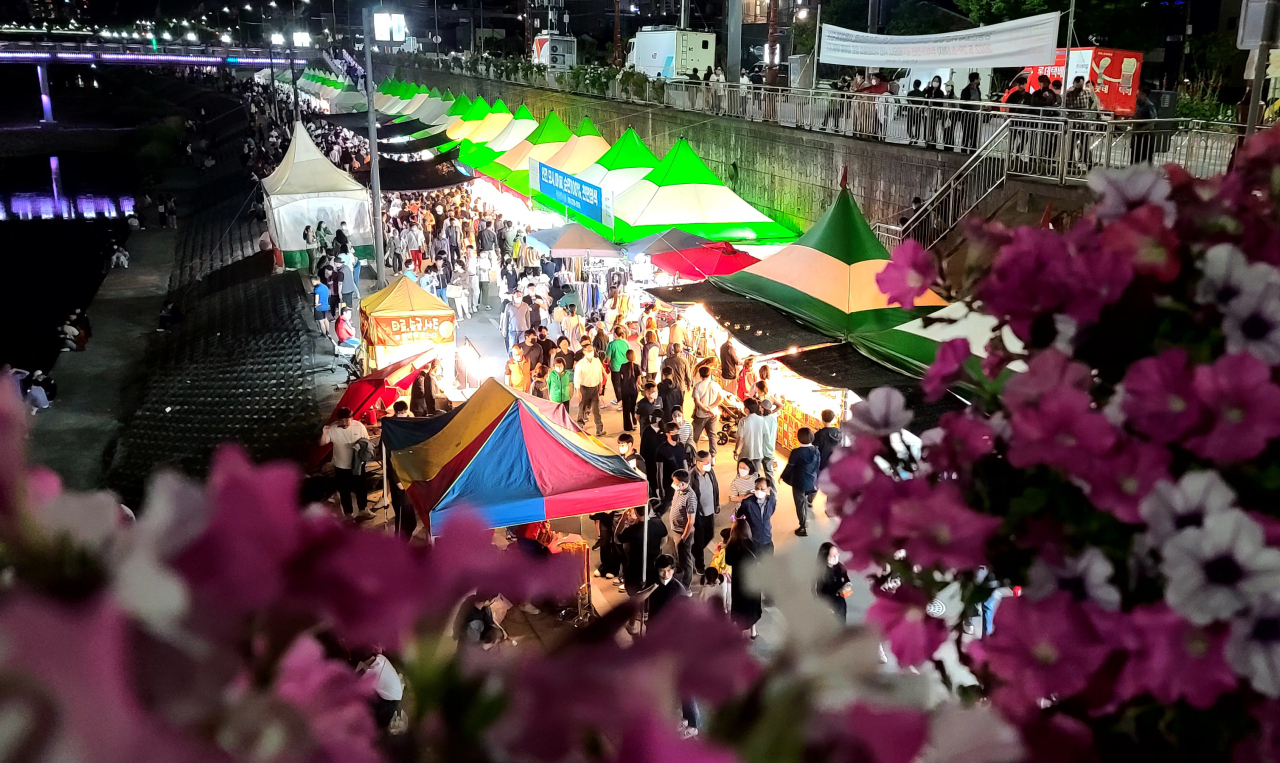 Gangneung Danoje was designated as a UNESCO World Intangible Heritage in 2005, in recognition of its cultural ingenuity and outstanding artistry.

On Wednesday, the third day of the eight-day festival, the festive spirit reached its peak at an open-air market called “nanjang.”

Danojang, a key feature of the festival, annually attracts over a million visitors from across the country.

A mix of performances and entertaining games to big and small pop-up stores selling goods from in and outside the region, the vibrant market is a cacophony of voices of people and those selling all manners of goods.

“I really enjoyed washing my hair with changpo- (iris leaves) soaked water, the tuho game where I earned a small prize. And I watched the black tiger performance which was also neat,” a 9-year-old girl from Chuncheon, Gangwon Province, said with excitement, showing off a mask she just made. 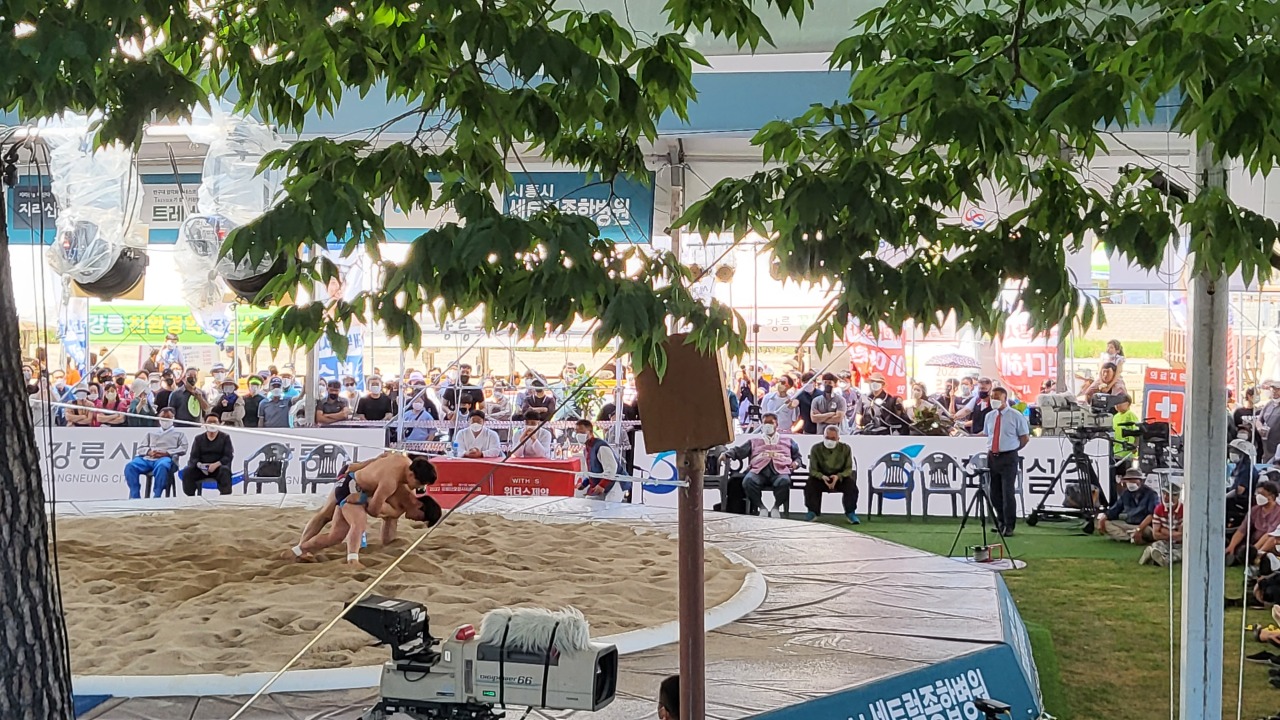 “Ssireum,” a UNESCO Intangible Cultural Heritage, is being held at an outdoor stadium located next to Namdaecheon stream in Gangneung, Gangwon Province, Wednesday. (Kim Hae-yeon/ The Korea Herald)
Strolling along Namdaecheon, frequent whistling and shouts by referees can be heard. Ssireum, folk wrestling, and geunaetagi, traditional swing, which are traditional folk games, have become major tournament-based events, drawing crowds up to an hour ahead of a match.

“Danoje is like a World Cup or the Olympics to us Gangneung citizens,” a man in his 70s told The Korea Herald, before the start of the women’s ssireum match. “We have our own favorites that we must watch. When I was young, companies often would let us leave early from work during Danoje, or even give us bonus pay to enjoy the festivities with family.”

In the afternoon, a great variety of performances followed, including the Gwanno Mask Drama, Gangneung Nongak and tightrope-walking circus. With satirical but heartwarming plots, stories of coexistence between nature and humans unfold. 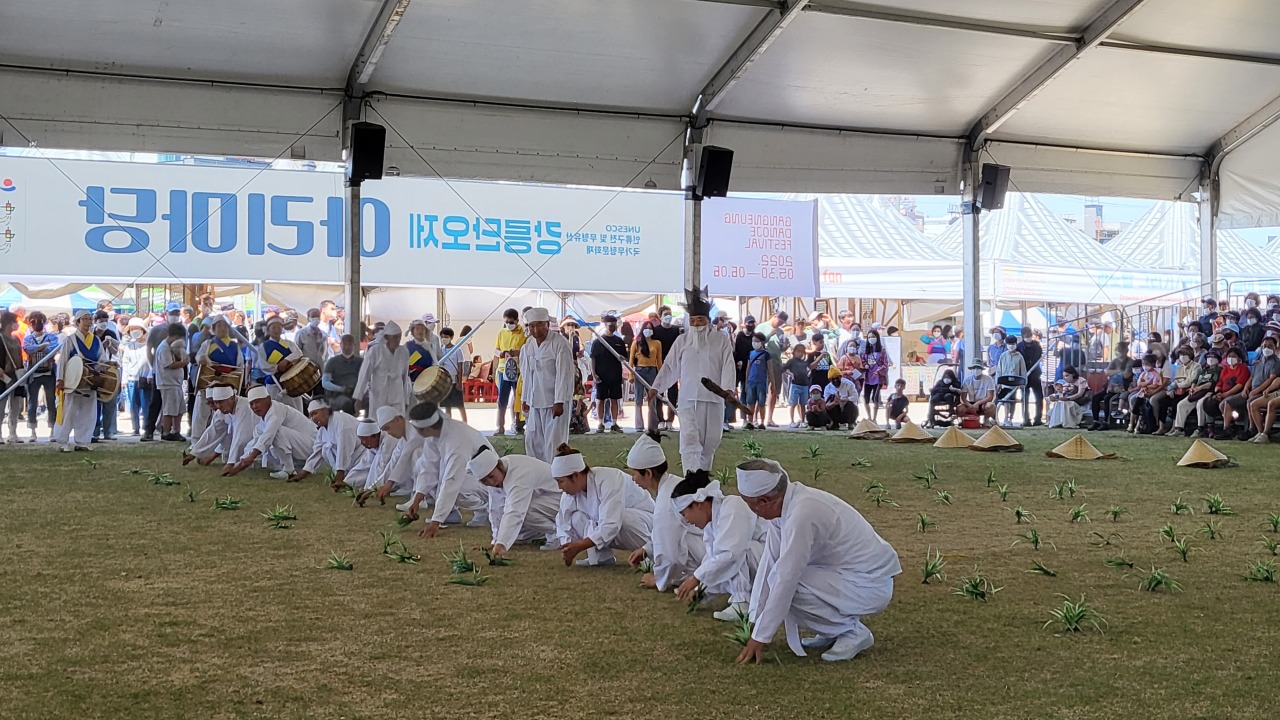 “Gangneung Haksan Odokttaegi,” a farm workers’ song chanted when working on rice paddies, is performed at the Gangneung Danoje Festival on Wednesday. (Kim Hae-yeon/ The Korea Herald)
“I’m so excited to be back onstage, and to see such a huge crowd,” Kim Min-seong, a performer who plays the white lion with the traditional music group, withTa, said. “Since traditional plays need ‘heung’ (Korean sentiment of excitement), reactions from the audience is most important. It’s not the perfection of the performance that matters, but the audience’s show of excitement that completes the play.”

At 8:30 p.m. the main event and purpose of Daenoje -- a shaman ritual called gut -- commenced.

At the shrine, vividly colored paper flowers and lanterns with symbols indicating spirits of life and nature, were hung from ceilings.

To send wishes to the heavenly deities to protect the people, prevent disasters and give prosperity, the shamans approached the altar to communicate with the gods and then turned around to face the audience, performing a series of dances.