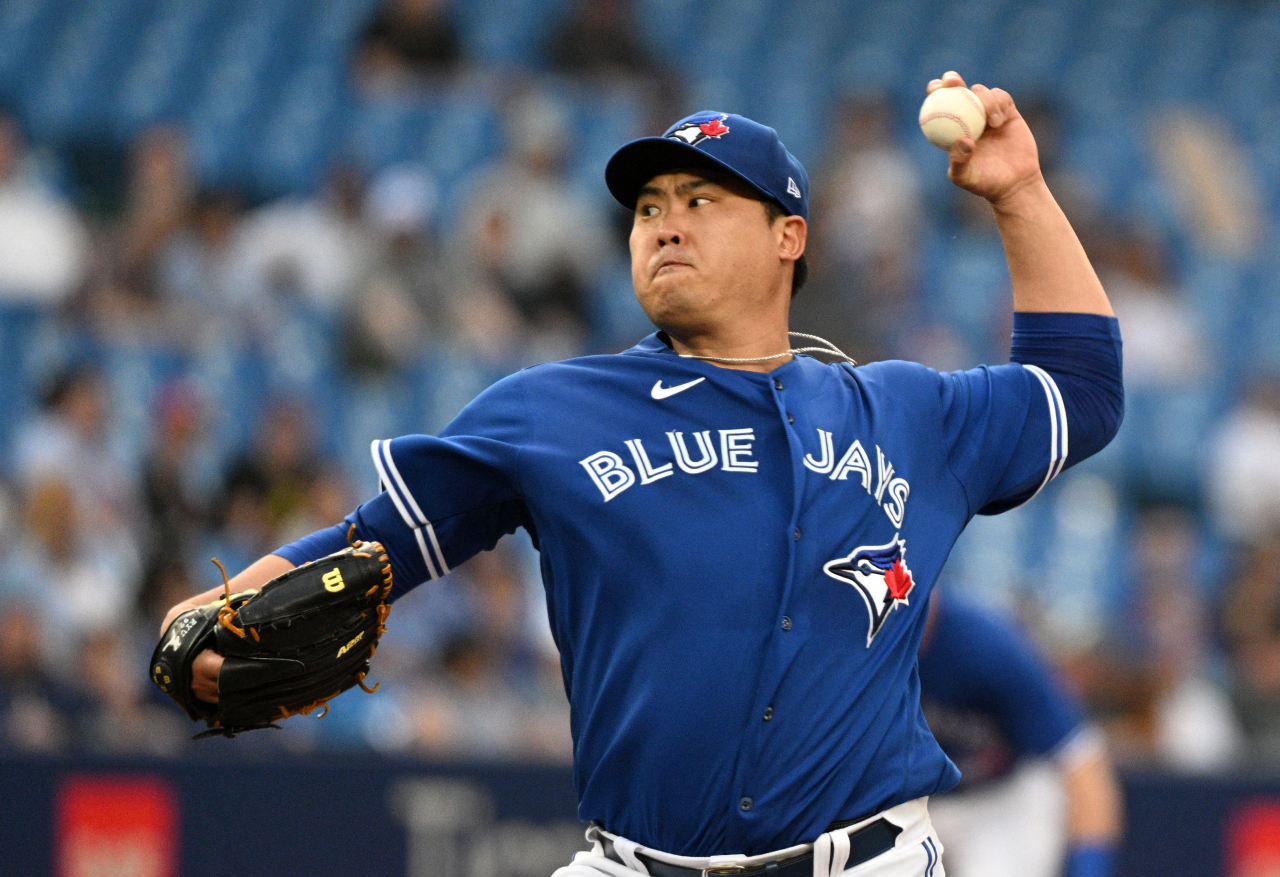 In this USA Today Sports photo via Reuters, Ryu Hyun-jin of the Toronto Blue Jays pitches against the Chicago White Sox during the top of the second inning of a Major League Baseball regular season game at Rogers Centre in Toronto on Wednesday. (Reuters-Yonhap)

Ryu Hyun-jin of the Toronto Blue Jays has served up two home runs in an outing for the first time this season, taking a no-decision in an abbreviated start against the Chicago White Sox.

The South Korean left-hander was taken out after throwing only 58 pitches over four innings. He gave up three runs -- one unearned -- on four hits, and he struck out four without walking anybody.

Three of those four hits went for extra bases. A.J. Pollock led off the game with a solo shot in the first, and Jose Abreu belted a two-run homer in the fourth. Jake Burger doubled in the fourth inning, which turned out to be Ryu's final frame.

Swingman Ross Stripling took over to begin the fifth inning, with the Blue Jays up 5-3.

It wasn't immediately clear if Ryu was dealing with any arm problems, but he looked to be laboring in the fourth inning after cruising through earlier frames.

Ryu had gone 2-0 with a 1.72 ERA in three starts in May, all of them coming after a monthlong stint on the injured list due to left forearm inflammation.

Ryu had been lifted after only five innings and 65 pitches last Thursday, though, with what manager Charlie Montoyo later said was elbow tightness.

Ryu has yet to top 80 pitches or pitch beyond six innings in a start this season.

Ryu surrendered a run just three pitches into the game, as leadoff man A.J. Pollock clobbered a 2-0 cutter and put it into the second deck in left field for a 1-0 Chicago lead.

By getting two outs in the first, Ryu reached 1,000 innings for his major league career. He is only the second South Korean pitcher to get to that milestone, joining former Los Angeles Dodgers ace Park Chan-ho.

Santiago Espinal responded for the Blue Jays with a leadoff home run of his own in the bottom of the first, tying the game at 1-1.

Ryu appeared to settle down in the second inning, retiring the side in order on nine pitches. He got Adam Engel to whiff on a changeup for the final out of the frame.

The Blue Jays took a 2-1 lead in the bottom of the second, with Bo Bichette drawing a bases-loaded walk.

After Pollock's home run, Ryu retired seven batters in a row. Danny Mendick ended that streak with a one-out single in the third, but he was erased on a 6-4-3 double play ball off Pollock's bat.

Ryu's catcher, Danny Jansen, helped his batterymate with the bat in the third, when he smoked a three-run homer to open up a 5-1 lead.

Ryu, however, gave back a couple of runs in the fourth. After Andrew Vaughn reached on an error by left fielder Teoscar Hernandez, Abreu turned on a changeup for a two-run shot that cut the deficit to 5-3.

Ryu pitched around a one-out double by Burger to limit further damage, but he didn't get to pitch any more innings. (Yonhap)